The Takeaway: US-Palestinian ties get upgrade ahead of Netanyahu’s return

Plus, US diplomats are evacuated from Syria and prospects sink for a revived Iranian nuclear deal. 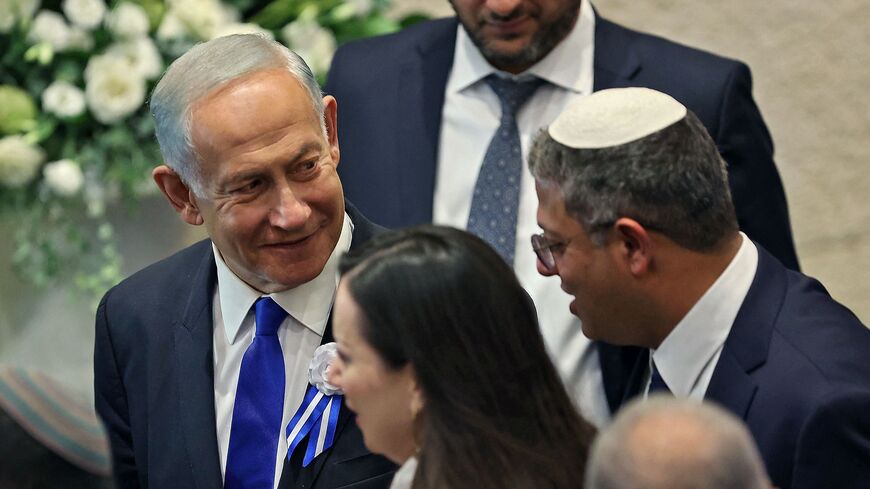 With Prime Minister-designate Benjamin Netanyahu set to preside over Israel’s most right-wing government in its history, the Biden administration has opened a new channel for engaging with the Palestinians as America's de facto embassy to them remains closed for the foreseeable future.

Hady Amr, previously the State Department’s deputy assistant secretary for Israeli-Palestinian affairs, has been named to the newly created post of US Special Representative for Palestinian Affairs. In a call with reporters on Wednesday, Amr described the Washington-based role as one that “bolsters our ability to manage challenges in the Israeli Palestinian relationship.”

"This move is completely consistent with the Biden administration’s commitment to strengthen US engagement with the Palestinian people," he said.

Amr’s new role "is an upgrade in the relationship, but it's starting from a very low point,” said Khaled Elgindy, director of the Middle East Institute's program on Palestine and Israeli-Palestinian affairs.

President Joe Biden came into office promising to reverse his predecessor’s policies that skewed heavily in Israel’s favor. But his administration has yet to fulfill a campaign pledge to reopen the US Consulate in Jerusalem, which served as the US diplomatic mission to the Palestinians before former President Donald Trump shuttered it in 2019.

Biden officials have said the administration “remains committed” to reopening the consulate — a line repeated by Amr on Wednesday — but analysts say there’s little chance of that happening under the incoming Netanyahu-led government.

“Does the Biden administration want to pick a fight with Israelis on this issue? Do they want to die on that hill for the Palestinians? Probably not,” said Elgindy.

The creation of a new Palestinian envoy post comes as Netanyahu is set to reclaim power with the help of an ultraconservative political alliance whose members are seeking a hard-line approach to the Palestinians.

The appointment of Ben-Gvir, a Jewish settler once convicted of inciting racism and supporting a terrorist organization, is of particular concern for Biden administration officials, who are reportedly considering boycotting any dealings with the far-right leader. Publicly, Amr and other US officials have declined to speculate on the composition of the new government and what it portends for US-Israel ties.

David Makovsky, a fellow at the Washington Institute for Near East Policy and former adviser on Israeli-Palestinian issues under the Obama administration, said there is “zero chance” the US Consulate in Jerusalem is reopened under Netanyahu’s new right-wing government.

“Some will joke that this is like a consul general-in-exile situation,” Makovsky said of Amr. But in the absence of a consulate, there will be “a sense that there will be someone who is taking Palestinian concerns to a senior level of the US government,” he said.

Turkey’s warplanes continue to attack the Kurdish-controlled zone in northeast Syria, reportedly killing at least 11 civilians this month. Amberin Zaman broke the news that all American diplomats and civilian staff working in northern Syria have been evacuated to the Iraqi Kurdish capital of Erbil amid increasing concerns that a Turkish land invasion is imminent.

A State Department spokesperson declined to confirm that the Americans had departed, but acknowledged that “recent airstrikes in Syria directly threatened the safety of US personnel who are working in Syria.” For more on how the Turkish attacks are impacting civilians, check out Zaman’s podcast with American aid worker David Eubank.

Iran nuclear deal ‘not on the agenda’

Robert Malley, the Biden administration’s special envoy for Iran, said the United States is not wasting time trying to resurrect the nuclear deal and a military option remains on the table as a last resort to keep Iran from acquiring a nuclear weapon.

“Iran has rejected countless opportunities to come back into the deal,” Malley said in an interview with Foreign Policy on Wednesday. “We're not going to simply wait to see what they decide.”

Will GOP control of the House hinder the administration’s Iran objectives? Malley said he doesn’t expect it to, but acknowledged the Biden administration’s attempt to craft a bipartisan Iran policy has “proven extremely difficult.” What about Israel's new right-leaning government? “It’s too soon to say” what it means for the JCPOA and Washington’s broader position on Iran, Malley said.

More top stories from our contributors

• Israel’s planned expansion of a controversial route linking southern Jerusalem to settlements is seen in the West Bank as an effort to Judaize the Holy City, reports Fayza Hassan.

• Fehim Tastekin examines how Ankara’s proposal for a new chapter with Damascus is linked to President Recep Tayyip Erdogan’s pre-election strategies and Turkey’s relations with Russia.

• Semih Idiz has this story on why Erdogan’s warm handshake with Egyptian President Abdel Fattah al-Sisi in Qatar caused such a stir in Turkey.