The team held up a photo of militia leader Abu Mahdi al-Muhandis, who was killed by a US drone strike in 2020. 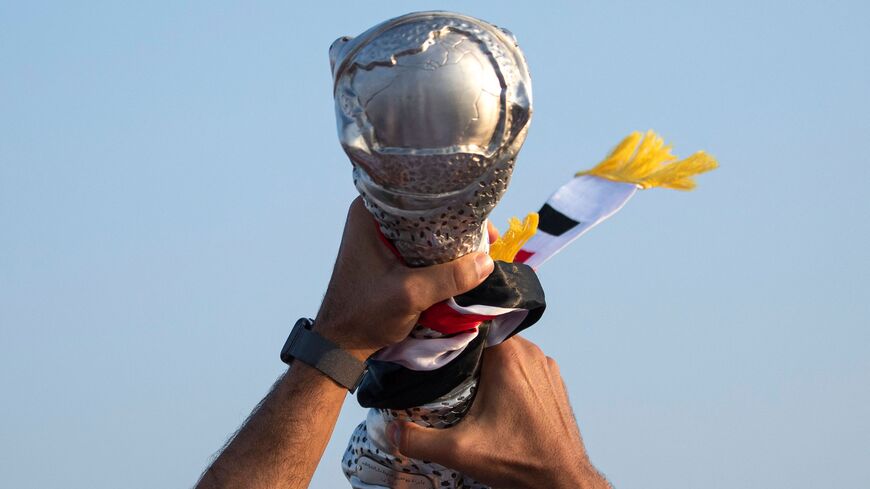 An Iraqi soccer player celebrates with the Arabian Gulf Cup aboard a boat floating down the Shatt al-Arab waterway in the city of Basra on Jan. 20, 2023. - HUSSEIN FALEH/AFP via Getty Images

The Iraqi men’s football (soccer) team met with Iraqi militia, religious and political leaders Saturday and Sunday in celebration of their victory in the Gulf Cup.

What happened: Iraq defeated Oman 3-2 in the Gulf Cup final Thursday in a thrilling match that went into overtime. The tournament was held in the southern Iraqi city of Basra.

This was the first time Iraq had hosted the Gulf Cup since 1979, after which multiple wars and the Islamic State conflict eroded security in the country.

The victory prompted celebrations throughout Iraq. On Sunday, Iraq’s Popular Mobilization Units hosted the Iraqi team for a victory ceremony. The team presented PMU leader Falih al-Fayyadh with the Gulf Cup trophy at the ceremony, according to a PMU press release.

Team captain Jalal Hassan held up a giant picture of the late PMU leader Abu Mahdi al-Muhandis at the event.

The PMU are largely Shiite Islamist militias that formed in 2014 to fight IS. Many are backed by Iran, though others are comprised of a variety of political, religious and ethnic groups. Muhandis was killed in the 2020 US drone strike in Baghdad that also killed Iranian military leader Qassem Soleimani.

On Saturday, Iraqi Prime Minister Mohammed Shia al-Sudani and Kurdistan Region President Nechirvan Barzani hosted the team for an official ceremony in Baghdad, according to a press release from Sudani’s office.

The Iraqi team also met Iraqi Shiite cleric Muqtada al-Sadr in Najaf Saturday and presented him with the Gulf Cup trophy, according to photos from Agence France-Presse.

#Iraq
Iraqi national team players met in #Najaf with Muqtada al-Sadr and even let him hold the Persian Gulf Cup.
Muqtada admonished the players to continue to defend the honor of the country and not get involved in politics

Did the Sunnis betray their brothers because of this? pic.twitter.com/S5ZyrCXReK

Why it matters: The team’s meetings with the PMU and Sadr demonstrate the strong continuing influence of both in the country. Sadr’s bloc received the highest number of votes in the 2021 election, but the rival Coordination Framework, which includes PMU and other pro-Iran politicians, ultimately chose Sudani to be prime minister. Sudani took office last October following months of political deadlock and violent clashes in Baghdad August.

The display of Muhandis’ picture at the PMU event is noteworthy. His death remains a major sore point between the United States and Iraq. The Iraqi government issued an arrest warrant for former US President Donald Trump in 2021 over the drone strike that killed Muhandis and Soleimani.

Know more: The use of term “Arabian” Gulf Cup to promote the tournament caused anger in neighboring Iran. The Iranian government summoned the Iraqi ambassador in relation to the term’s usage. Iranians refer to the region as the Persian Gulf, but some Arabs prefer to call it the Arab Gulf.

Sadr notably used the term “Arabian Gulf” in his tweet congratulating the team.