Iraqi PM in Germany to sign agreement with Siemens 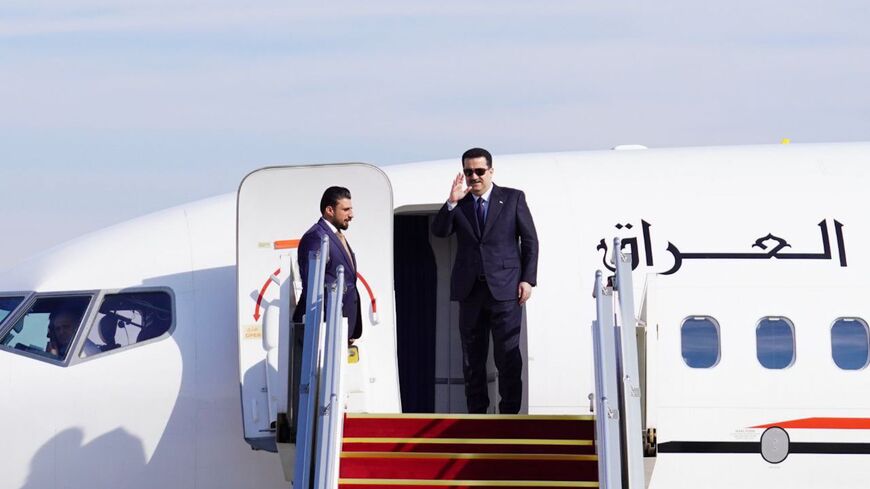 Iraqi Prime Minister Mohammad Shia al-Sudani is seen in Baghdad as he departs for a visit to Germany, Jan. 12, 2023. - Iraqi prime minister's office

Iraqi Prime Minister Muhammad Shia al-Sudani traveled to Germany on Thursday for a visit to include meetings with senior officials as well as representatives of German companies.

Prior to his departure, Sudani stressed that this trip will be different from previous ones by former Iraqi officials. He said that the agenda centers on electricity and that Baghdad would sign a memorandum of understanding with Siemens Energy for a plan to develop Iraq's electricity sector.

Sudani said that a joint action plan will be drawn up during the visit, and promised that all agreements signed would be implemented immediately based on allocated budgets.

Sudani's trip to Germany has been scheduled since shortly after the new Iraqi government was formed in late October of 2022, following an invitation from German Chancellor Olaf Scholz.

Former Iraqi Prime Minister Adel Abdul Mahdi also traveled to Germany in April 2019, when he signed an agreement with Siemens worth up to $14 billion in the presence of then-German Chancellor Angela Merkel on a plan to upgrade Iraq's electricity infrastructure.

The agreement, however, has not been implemented due to a number of factors, including bureaucratic obstacles on the Iraqi side, the massive protests that rocked the country from 2019-2020, the conflict between Iran and the United States following the assassination of Iranian Quds Force commander Qassem Soleimani and the COVID-19 pandemic.

While Sudani confirmed that his government had already allocated the required funds for Siemens to start work, Iraq's federal budget for 2023 has been delayed and is not expected to be finalized before the middle of this year. Any funding for major projects like those outlined in the agreement with Siemens must be included in the national budget and approved by the parliament.

Siemens will not be able to launch the project in Iraq until it is approved and funding is allocated in the national budget.

Iraq electricity sector suffers from three major issues. First, Iraq is not producing enough electricity and is dependent on Iranian gas for electricity generation. Iran is not able to provide Iraq with enough fuel to meet demand.

Second, Iraq’s transmission and distribution networks have not been upgraded in decades, resulting in a loss of about 30% of what electricity is generated.

Third, the Iraqi government is forced to allocate massive funds each year for electricity in the national budget to subsidize citizens' commonly unpaid electricity bills.

Sudani said that he will discuss with Germany other issues such as climate change and opportunities in several fields, including associated gas, natural gas, petrochemicals, vocational training and higher education, as well as finance and banking cooperation.

Speaking to the German daily Frankfurter on Thursday, Sudani emphasize the significance of his visit to Germany, saying he hoped to build a bridge between the two countries to bring Germany technology and experience to Iraq.

“My official visit to Germany is an affirmation of the strong relationship between Baghdad and Berlin in both the economic and the political fields,” Sudani said.