Conference shows that space exploration and commercialization is opening up to more countries. 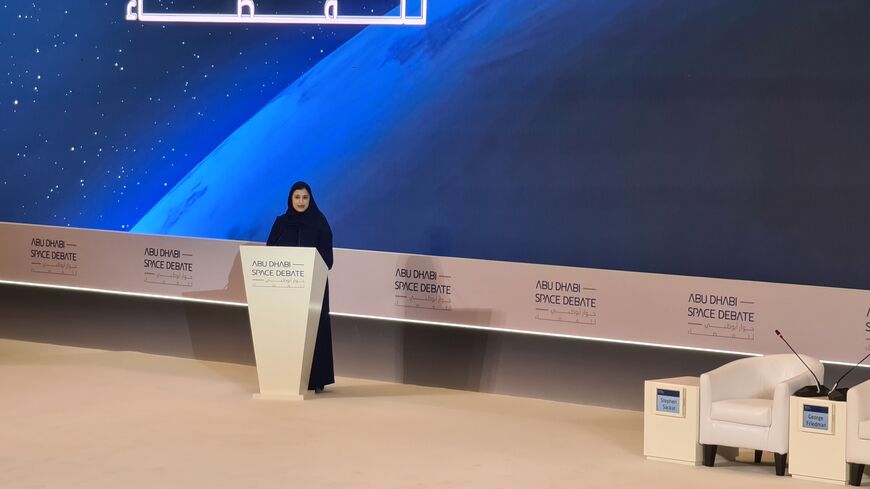 Sarah Al-Ameri, the UAE Minister of State for Public Education and Future Technology, during the opening address of the Abu Dhabi Space Debate (ADSD) on Monday, Dec. 5, 2022. - Salim A. Essaid/Al-Monitor

A global space conference in the UAE capital that wrapped up on Tuesday suggests that mid-level powers may be emerging to dethrone the Cold War old guard.

The Abu Dhabi Space Debate (ADSD) hosted about 50 space institutions and agencies from the private and public sector at the two-day event. Many participants believe that the further you see Earth from space, the more borders disappear.

There’s no longer a space race “but rather a new space age,” said Sarah Al-Ameri, the UAE minister of state for public education and future technology, during the opening address.

Water and food security, climate change, piling satellite debris in Earth’s lower orbit, and the militarization of space were key topics believed to be better resolved with collaboration.

“We’re trying to have a voice for emerging nations in space and also industry to showcase their perspective on the international challenges,” said Salem Al Qubaisi, the director general of the UAE Space Agency.

He told Al-Monitor that new discoveries about Mars auroras were made from its Hope Mars probe, launched from Japan in 2020, which will be shared with science institutions and the public over the next few days.

“For too long, space has been dominated by governments. ... We’re more efficient than the government in operations,” Manber told Al-Monitor, adding that the observation technology being used to help in the Ukraine war is mainly commercial.

The UAE, he said, is “unencumbered, it doesn’t have some of the bureaucracies that some of the other space agencies have.” When the UAE sent its first astronaut to space in 2019, the Mohammed Bin Rashid Space Center in Dubai worked with international space agencies including Russia’s Roscosmos, and “they asked the company we run, Nanoracks, to do the educational payloads,” he added. “Now there you have an Emirates organization, working with the Russians, using an American private company for one aspect of it.”

Israeli president Isaac Herzog arrived in the UAE capital Monday, after being Israel’s first head of state to visit Bahrain on Sunday, and gave a keynote address at the space event.

“I believe that the UAE, and Israel, and India can lead the way for the entire region together with our partners,” said Herzog, who highlighted India’s space capabilities and the Israeli-French VENUS satellite launched in 2017 to collect agricultural data, which is now being used in UAE-Israeli scientific research.

Since the 2020 Israeli-UAE normalization agreement under the Abraham Accords, the two countries have signed further knowledge transfer and space exploration agreements including one collaborating on Israel’s Beresheet-2 mission to land a spacecraft on the Moon by 2024.

“Israel doesn’t have the budget that the U.S. or Western European countries have,” said i24 defense correspondent Jonathan Regev after the Israeli president’s address. “Israel can bring the knowledge, the UAE can bring the money.”