The Egyptian Ministry of Endowments has built thousands of new mosques in President Sisi's time in office, despite pressing needs for education, health care, and other services. 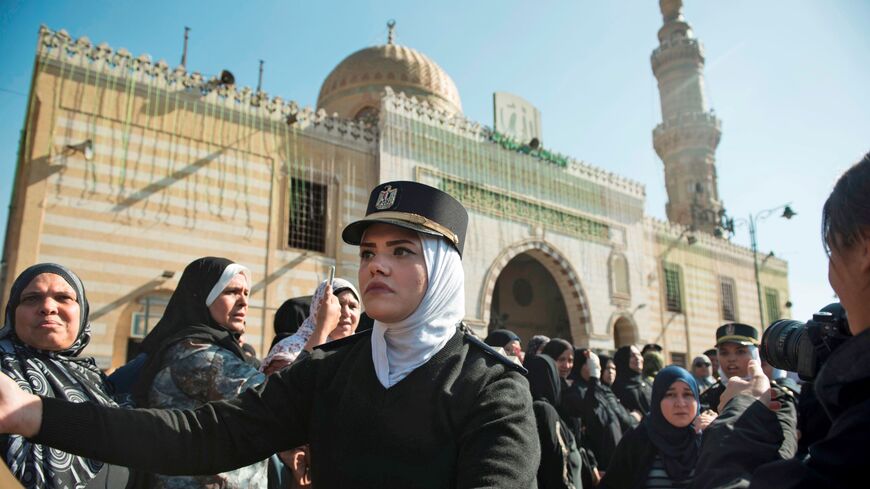 Policewomen organize mourners attending the funeral of the late popular singer and actress Shadia, at the Sayeda Nafisa mosque in the capital Cairo on Nov. 29, 2017. - MOHAMED EL-SHAHED/AFP via Getty Images

CAIRO — From his balcony in al-Qubbah district of the capital Cairo, 20-year-old Mahmoud Abdo can hear the call to prayer from at least five different mosques.

Amid Egypt's dire economic conditions, Abdo is not sure that the excessive spending on all these religious centers is necessary.

“We used to hear people say in the past that money that is needed for [poor] households should not be spent on mosques,” he told Al-Monitor. Instead, most mosques would have boxes to take donations for the development of the mosque or for other charitable work.

However, in November of last year, the Egyptian Ministry of Religious Endowments canceled donation boxes, Sky News Arabia reported, stipulating instead that donations should be made directly to the mosques' accounts via bank transfer.

In September 2020, Egyptian Minister of Endowments Mohammad Mokhtar Gomaa revealed in a televised interview that the number of mosques across Egypt had surpassed 140,000, including 100,000 large mosques.

Mohammed Ali, 60, from the Maadi district of Cairo, is disappointed by the lack of mosque goers for the five daily prayers in his neighborhood, despite the large number of mosques there.

“The mosques in my area are usually full only during Friday prayer and the month of Ramadan. But the rest of the time, there is only a small number of people attending prayer at the mosques,” he told Al-Monitor.

Ali said he wishes mosques were filled with worshipers, especially given the high number of mosques in residential areas, and stressed the importance of building more mosques.

Last month, the Ministry of Religious Endowments announced that 9,600 mosques have been built or renovated since President Abdel Fattah al-Sisi assumed office in 2013, at a cost of 10.2 billion Egyptian pounds (around $404 million).

However, the push has raised concerns among Egyptian intellectuals and youth. Journalist and doctor Khaled Montaser criticized the spending on Twitter last month. He argued that prayers can be held anywhere, but educational services require schools and medical treatment requires hospitals.

US magazine Ceoworld placed Egypt in the last place among Arab countries on the average per capita salary, at $219 per month.

Meanwhile, Egypt is witnessing an unprecedented rise in commodity prices, in addition to the devaluation of the pound against the US dollar. Last month, the government-run Central Agency for Public Mobilization and Statistics reported that inflation rates in the country jumped from 6.2% in November 2021 to 19.2% in the same month of this year.

In response to the criticism, a source from the Egyptian Ministry of Religious Endowments told Al-Monitor on condition of anonymity that the building of mosques is not coming at the expense of other charitable work.

“The ministry fulfills its charitable and humanitarian duties toward society in addition to building and developing mosques."

"The construction money is from endowment funds in addition to the ministry's allocated budget. The spending on equipping and furnishing mosques comes from the donations of the people and charitable work," the source explained.

At a meeting with religious leaders in Matrouh governorate last month, Gomaa praised the mosque-building program, adding that this is an unprecedented number in the history of Egypt and any other country.

In televised statements, Sheikh Khaled al-Jundi, a member of the Supreme Council for Islamic Affairs affiliated with the Ministry of Endowments, agreed that it is a sign of “preserving religion.”