The Egyptian government is opening hundreds of new mosques across the nation, brushing off Muslim Brotherhood accusations that the state is demolishing places of worship. 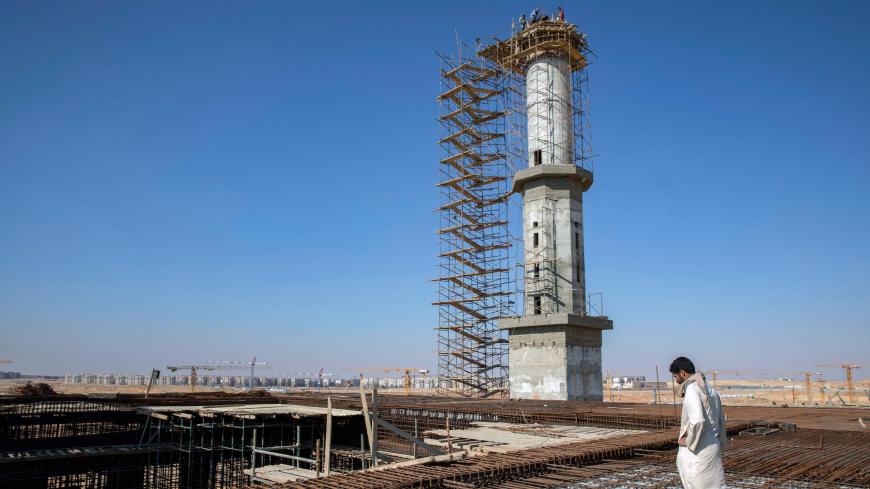 A bricklayer is working on a mosque construction site, in the new administrative capital, some 50 kilometers (31 miles) east of the capital Cairo, Egypt, March 8, 2019. - PEDRO COSTA GOMES/AFP via Getty Images

In a Sept. 3 statement, Minister of Religious Endowments Mohamed Mokhtar Gomaa said the government would open and renovate 314 mosques in September and October.

The foreign-based opposition and the Muslim Brotherhood had launched a vicious attack on the Egyptian authorities, whether through their satellite channels or social media, after the demolition in May of nearly 30 mosques in Alexandria to make way for the construction of roads and bridges.

At the time, the Egyptian authorities said these mosques were built on state lands, whose demolition is part of its campaign against illegal construction, and squatting public and agricultural lands. The demolitions had raised the ire of Egyptians in several governorates.

During the inauguration ceremony of a national project in Alexandria Aug. 29, Egyptian President Abdel Fattah al-Sisi responded to these accusations by saying, “We demolished 30 mosques, but we rebuilt them for the national interest and development — not because of what they had accused us of.”

Sisi expressed strong discontent with the accusations, which he considered far from reality and aimed at sabotaging the state and spreading sedition.

Gomaa said during a telephone intervention with "Al-Hekaya" broadcast on MBC Misr satellite channel Sept. 12, that mosques and "zawiyahs" (islamic religious school) number nearly 140,000, and that Egypt would soon be called the country of "the 100,000 minarets." He added that Cairo is known as the “city of 1,000 minarets,” and therefore these “accusations are lame and unfounded, aimed to push agendas and stir up ill feelings and sedition, discord and instability.”

“These evil people [a jab at the Muslim Brotherhood] are spreading lies and rumors to create chaos and sedition to stop the wheel of stability and development that Egypt is witnessing right now. Egyptians should not fall prey to this ruse and these false accusations. Over the past six years, 1,200 new mosques have been built, and nearly 3,600 mosques have been restored. This is a huge achievement that has not been done before,” Gomaa added.

Spokesman for the Ministry of Endowments Abdulla Hassan told Al-Monitor that new mosques are opened every day and listed on the ministry’s website. “These accusations are baseless and serve one purpose only — to undermine the stability of the country,” he said.

Hassan said that Egypt is the heart of the Islamic world and Egyptians are religious by nature, and therefore promoting false statements and news is “evil.” “These accusations will fall on deaf ears. The revolution of June 30, 2013, was the death sentence of this organization,” he noted in reference to the Muslim Brotherhood.

Ahmed Karima, professor of comparative jurisprudence and Islamic law at Al-Azhar University, told Al-Monitor, “Egypt builds mosques and does not destroy them. Egypt is home to Al-Azhar, which is the heart of the Islamic world. So there is nothing to defend here or to apologize for. Egypt has done nothing wrong to be condemned.”

He added that the rumors about destroying or removing mosques are baseless reports aimed at spreading confusion by some “dark groups,” in reference to the Muslim Brotherhood. “A few mosques were previously illegally built, squatting public land and without the necessary construction license. It would not be possible to build places of worship in an illegal way. This is wrong and against the teachings of Islam and the law. These mosques were removed as per the provisions of the law,” he said.

Shukri al-Gundi, undersecretary of the parliamentary Religious Committee, warned against these false accusations. He told Al-Monitor that Egypt has been facing a deliberate smear campaign by the foreign-based opposition to send the country spiraling into chaos and the unknown, and to stop the journey of development and construction.

He added that the state banks on the awareness of Egyptians and their willingness not to fall prey to these extremist ideas. “Egypt would never remove mosques,” Gundi said, denouncing these “ridiculous” accusations.