The Egyptian government faced little opposition as it demolished a Sufi mosque in Alexandria to conclude a major road project, suggesting Sufis’ need for political protection may outweigh their reverence for shrines. 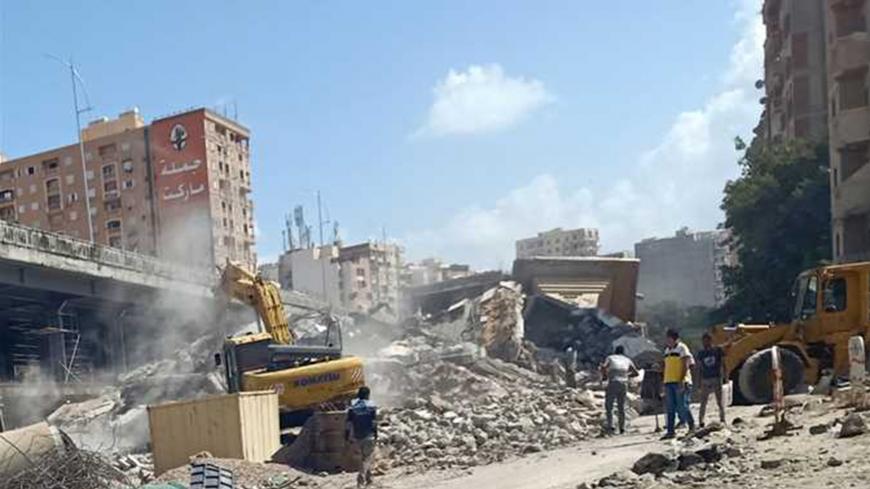 The rubble of Sidi Abu al-Ikhlas al-Zarqani is seen after being destroyed by the Egyptian authorities, Alexandria, Egypt. Aug. 19, 2019. - Twitter/@qudsn

CAIRO — Alexandria's Sidi Abu al-Ikhlas al-Zarqani compound, which included a mosque, shrine, hospital and charity center, was demolished Aug. 19. The shrine was built for Burhan al-Din Abu Ahmed al-Ikhlas al-Zarqani, the founder of the Iskhlasi Sufi order who died in 1979.

The mosque was demolished because it was standing in the way of the Mahmudiya axis project, one of the national projects taking place in Alexandria, which includes the establishment of an integrated traffic and development axis at a cost of 5.5 billion Egyptian pounds (about $330 million) to solve the traffic crisis.

Almost eight months ago, there was a great deal of tension between the authorities and those who insisted that the mosque should not be destroyed and organized sit-ins there.

On Aug. 17, Egyptian President Abdel Fattah al-Sisi intervened and ordered that all obstacles impeding Mahmudiya project be removed, including the mosque. In a televised speech, Sisi said that the compound impeded progress on the project “and this does not satisfy the Prophet Muhammad. We said just name a new location and we will make a replica or even a better mosque.”

The Sufis, a sect of hundreds of thousands and known for its absolute support for the Egyptian regime, welcomed Sisi’s decision to demolish the shrine and move it to another location. In a televised message Aug. 19, Sheikh Mohamed Safwat Fouda, Sufi chief in Alexandria, stressed his support for the decision in contradiction of the Sufi aversion to harming shrines.

Of note, Egypt’s Dar al-Ifta also has many fatwas that prohibit the demolition of shrines.

Abdul Hamid al-Atrash, the former head of Al-Azhar's fatwa committee, told Al-Monitor, “Islam respects the dead just as much as the living. The Prophet Muhammad said, ‘To break a Muslim's bone when he is dead is like breaking it when he is alive.’ One should not harm the bodies of the dead and this is why the Prophet Muhammad prohibited sitting on a tomb. It is as sacred as a mosque.”

He added, “If there is a body in the shrine, it must be respected and no one should touch it for any reason. However, if its presence causes damage, the remains should be placed in a new white cloth and buried elsewhere. Since the shrine of Burhan al-Din Abu al-Ikhlas al-Zarqani is causing great damage by hindering a major development project such as the Mahmudiya axis, it needs to be relocated. The state has promised to build 14 mosques in a modern way on both sides of the road to replace the mosques that were demolished.”

Ahmed Karima, a professor of comparative jurisprudence at Al-Azhar University, told Al-Monitor, “Sharia values public interest over private interest. When Prophet Muhammad started building the Prophet's Mosque in Medina, he found tombs dating back to ancient times so he ordered the remains collected with respect regardless of the beliefs or religion of the dead and that they be reburied elsewhere. Accordingly, the principle of easement was established, which values public interest over private interest in Sharia. President Sisi’s decision to demolish the shrine follows Sharia. It is not the first time this has happened, as hundreds of tombs were moved to build Salah Salem Street, one of the largest streets in Cairo.

Karima said that organizing sit-ins at the mosque was demagogic and wrong. He said that had they had a solid case, they should have turned to the Egyptian judiciary to decide on the matter.

A source from Ahl al-Dhikr Al-Ikhlas, the association overseeing the shrine and the hospital, told Al-Monitor on condition of anonymity, “We went to present our case to the presidency and the leadership of the northern military command but they refused to hear us out because we have no legal standing. We had no other choice but to turn to the Department of National Security in Alexandria, and it made a recommendation to the administration in Cairo to maintain the shrine in exchange for the demolition of the mosque and hospital, so we were shocked to see the shrine gone.”

Sheikh Jaber al-Qassim, former Sufi chief in Alexandria, told Al-Monitor, “The shrines and bodies of both Burhan al-Din Abu al-Ikhlas al-Zarqani and its sister Umm Mohammed were temporarily transferred to the mosque square next to Abu al-Abbas al-Mursi Mosque in Bahri area, with tight security measures, although the mosque is not a Sufi one.”

Said Sadek, a professor of political science at the American University in Cairo, told Al-Monitor, “Sufism's support for Sisi's regime and the state's executive bodies' social, religious and political support for Sufism is not surprising. Sufism is the largest Muslim faction in Egypt at more than 15 million citizens. Sufism believes that change for the better can only be achieved through God, unlike other currents of political Islam that seek to make change by attaining positions of power and sometimes using violence.”

He added, “The state's executive bodies, represented by the Ministry of Religious Endowments and the Ministry of Interior, support and protect Sufi mosques and shrines.”

He noted, “Sufis are loyal to the strongest party for protection. They support President Sisi and supported former President Hosni Mubarak because they have no militias and are unprepared for violence against the Salafist movement, which is usually ready to use violence to achieve its goals. Sufis aim to stay on good terms with the current Egytpian regime and will not fight it on the issue of the shrine. Sufis would rather stay close to the regime and keep close watch on the relationship between Sisi’s regime and the Salafists, whom it uses to fight the Muslim Brotherhood and restricts actions it might take against the Sufis.”

Sadek pointed out that Sufis had never considered establishing a political party until after the 2011 revolution, when the community thought to form one to protect their beliefs against the Salafists, who had formed their own party.

Yet, he explained, the Sufis found themselves unprepared for partisan life, which they believe contradicts their beliefs. Sufis then turned to Sisi, Sadek noted, adding that the regime provided support and protection for the shrines and Sufi beliefs in the face of Salafism. Sufis were rewarded for their loyalty by the appointment of Sufi chief Sheikh Abdel Hadi Al-Qasabi as head the Support Egypt Coalition, Sadek concluded.