Sufis look for a political role in Egypt

Sufis have vowed to make an impact during Egypt’s next elections, in an attempt to push back against the Muslim Brotherhood and Salafists. 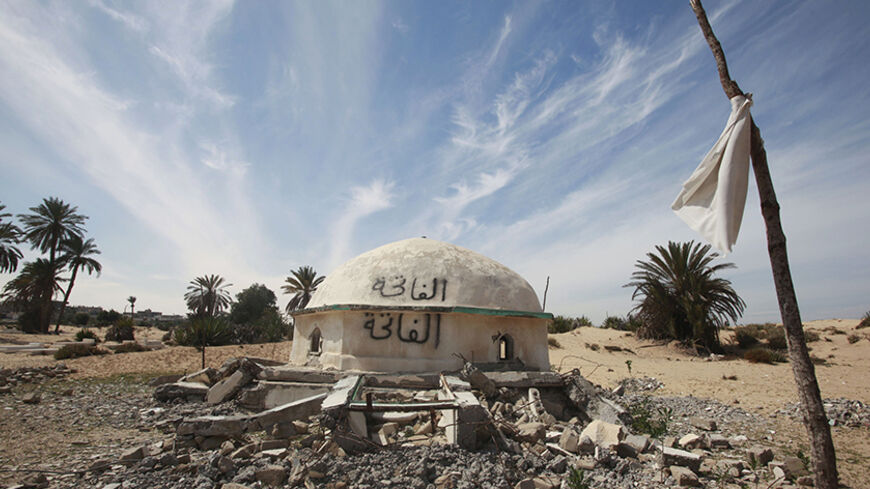 The remains of the Sheikh Zuweid shrine, a Sufi holy site, are seen after it was blown up by Islamist extremists, at a graveyard in Sheikh Zuweid city, in north Sinai, March 7, 2012. - REUTERS/Asmaa Waguih

Following the car bombing of the Ahmad Al-Badawi Mosque — a Sufi mosque that contains the shrine of Al-Sayyid Al-Badawi, founder of the Badawiyyah Sufi order — on Oct. 14, 2014, sheikhs of the Sufi order issued statements accusing the Muslim Brotherhood and Salafist movements of carrying out the operation. They vowed that they would even the scores in the next parliamentary elections, as the Sufi orders, for the first time, would toss their hat in the ring, in coordination with other political forces. So would the Sufi order be a more moderate religious alternative to the Muslim Brotherhood and the Salafists in power?

Sufis and the Muslim Brotherhood might share common ground in regard to the principle of absolute obedience to the commander; the Muslim Brotherhood strictly obeys the group’s general guide, and Sufis follow the command of the sheikh of the Sufi order. In this context, Ahmed Ban, a researcher in Islamic movements, told Al-Monitor, “There is a disparity in views between Sufis as to the ideas on obedience. While some believe that the sheikh of the order should be fully obeyed, others believe that their relationship with him is more spiritual, aiming at enhancing and improving their behaviors.”

For his part, Sheikh Alaa Abu al-Azayem, a sheikh of the Azamiya Sufi Order, said in an interview with Al-Monitor, “Sufis are not a religious group like the Muslim Brotherhood and the Salafist group. Sufism is a way of life dedicated to enhancing the behavior of the people belonging to it. Sufis believe that the sheikh of the order may err and thus they are not obliged to obey him blindly.”

Sufis, the Muslim Brotherhood and Salafists believe in the return of the caliphate or the Islamic state. According to the book “Al-Jafr,” which is one of the most famous mystical books by Sufi Sheikh Mohammed Abu al-Azayem, the Islamic Caliphate will be reinstated but adapted to the current time.

In the same vein, Rifaat Al-Sayyed Ahmed, a political analyst, told Al-Monitor, “The return of the Islamic Caliphate is an [important] notion that exists among all religious groups, but its degree of flexibility differs from one group to another.”

In one of his statements, Abu al-Azayem said that he does not believe in the return of the Islamic Caliphate.

According to Abu Al-Azayem, Sufis have faced colonialism in Egypt, Arab countries and Africa, yet they do not believe in jihad and declaring those who disagree with them as infidels, as is the habit among the Muslim Brotherhood and some Salafist movements.

In Iraq, the Naqshbandi order is one of the Sufi orders that established armed militias following the US invasion in April 2003. The group did not limit its role to fighting against the American invasion alone, but today it has gone so far as to ally itself with the Islamic State (IS) in some military operations that led to the fall of Mosul, according to some media reports.

Moreover, some newspapers reported that the coalition of the Sufi orders in Egypt was urged in 2011 to form militias to defend the shrines that came under attack following the January 25 revolution. However, these reports were denied by the General Sheikdom of the order.

In one of its fatwas during the Rabia al-Adawiya Square sit-in of 2013, the Sufi order stated that those who kill members of the Muslim Brotherhood or Salafists, during any confrontation with the army or the police, were considered to be infidels.

Among the criticisms hurled at the Brotherhood is its relationship with the dissolved National Democratic Party (NDP), after some activists re-posted the interview conducted by one of Egypt’s newspapers with ousted President Mohammed Morsi (formally in charge of the Muslim Brotherhood’s parliamentary elections committee). In the interview, he said that the Brotherhood had been coordinating with some of the NDP figures, because they were “national symbols.”

However, Sufis can be criticized for the same reasons, as (according to Ahmed) the group previously had strong ties with the NDP to the extent that Sheikh Abdul Hadi al-Qasabi, a Sufi order sheikh who once belonged to the party, said that the Sufi order would cooperate with the NDP figures in the upcoming parliamentary elections.

It has been said that the Muslim Brotherhood has common interests with the West, especially the United States. Sufis, on the other hand, have been criticized in the media for their relations with other countries, mainly Iran, whose relationship with the Egyptian regime has yet to be clearly defined. Some news outlets alleged that Iran funded the World Federation of Sufi Orders.

According to Ahmed and Ban, it would be too early and unfair to accuse Sufis in Egypt of being loyal to a certain regime, as the Sufi political experience in Egypt has yet to materialize.

“The Senussi political-religious Sufi order that ruled Libya before the al-Fateh movement was severely criticized because of its loyalty to Britain. The Senussi regime allowed Britain to establish military bases in Libya according to a treaty in July 1953. The regime also allowed the United States to follow suit but in exchange for financial aid, which was one of the reasons behind the emergence of the al-Fateh movement,” Ahmed said. “Sufis in Egypt should not be judged in light of the Senussi experience in Libya.”

Both Ban and Ahmed agree that Sufism is not characterized by extremism or radicalism and does not seek to prohibit arts, for instance, as is the case with other religious groups. However, according to Ahmed, the Sufi orders do not believe in the liberal paradigm of absolute freedoms. “Sufism is the middle ground between radical religious groups and excessive freedoms that can be found in some political models,” he said.

“Sufism is basically a religious education. Sufis believe in resorting to Sharia arbitration and in the need for arts, media and the state policies to be coherent in general. However, they are the least rigid and the most flexible in applying this,” he said.

One could say that Sufis, the Muslim Brotherhood and other Salafist movements share some common principles, while the difference lies in the degree of flexibility in applying these principles. However, this would only be proven on the ground, checking whether or not Sufis would be the more moderate alternative to the Brotherhood. So far, indications suggest a certain similarity.