A Sufi sheikh has been elected to lead the majority Support Egypt Coalition in the Egyptian parliament, leading some to wonder if it signals the rise of another religious current in the wake of the Muslim Brotherhood's fall. 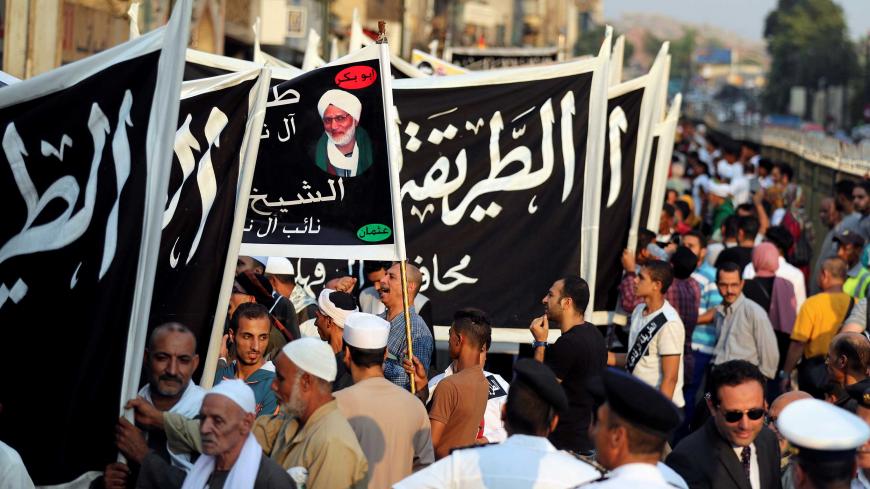 CAIRO — Sufism appears to be politically ascendant in Egypt, with one of its leaders tapped to lead the parliamentary majority for the first time. This has led many to speculate about the future of Sufism in the political arena and the possibility of a return of political Islam after the fall of the Muslim Brotherhood.

Sheikh Abdel Hadi al-Qasabi, vice president of the Nation’s Future Party, chairman of parliament’s Social Solidarity Committee and head of the Supreme Council of Sufi Orders, became the leader of parliament’s majority alliance, the Support Egypt Coalition, assuming the position by acclamation on Sept. 17. The coalition consists of seven parties represented by some 400 independent and partisan parliamentarians. There is a total of 596 seats in the parliament.

Sufi sheikhs in Egypt view Qasabi’s victory as burnishing Sufism's reputation and as acknowledgment of its positive role in society. It also symbolizes Sufis' desire to be represented in Egypt’s political future. Sheikh Alaa Abu al-Azayem, a member of the Azamiyah Order and the Supreme Council of Sufi Orders, asserted in a Sept. 21 press statement that Sufis are qualified to give voice to the religious community.

According to Qasabi, approximately 15 million Egyptians, out of 104 million total worldwide, are Sufis. They belong to 77 officially recognized Sufi orders, or tariqa, congregations of followers gathered around a leader seeking the truth.

Sheikh Abdul Khaliq al-Shebrawi, from the Shebrawi Order, told Al-Monitor, “Sufism is based on self-discipline and [personal] development. Murids [novices committed to spiritual enlightenment] are under the authority of the political leadership and religious institutions in Egypt.” In this, he indicated that this state of affairs guides Sufis to act in a peaceful manner, avoiding violence and conflict with the state and its leadership.

Sufism embraces adoration of God and asceticism. One of its key conditions is steering clear of politics, but Sufi sheikhs in Egypt have sometimes played political roles and attained prominent positions. Egyptian Sufis are well-known for their aversion to extremist currents of political Islam, namely Salafism. In 2013, they rallied with various political parties to topple Mohammed Morsi's Muslim Brotherhood regime.

“We have to fix what the Salafists and Muslim Brotherhood did,” Shebrawi said. “They are one and the same. They wanted to lead the country to political decay. It is time to regain what we lost over many years.”

Sufism rejects the idea of a caliphate, a concept commonly adopted by the Muslim Brotherhood and extremist Islamic groups, most prominently the Islamic State. Sufi sheikhs preach that Sufism is based on “wasatiyah” (moderation) and have accused the Brotherhood of sympathizing with Salafists in attacking Sufism. Salafists view Sufism as apostasy and have called for destroying Sufi mausoleums, where they gather on religious occasions, and disrupting their celebrations.

Sufi sheikhs and Sufi youths have played a vital political role in Egypt since the January 2011 revolution. Sufis youths gathered in Tahrir Square to help topple President Hosni Mubarak’s regime, and Sufi orders joined the Tamarrod campaign against Morsi’s regime. After the demonstrations launched June 30, 2013, the Sufis were at the forefront of currents supporting Field Marshal Abdel Fattah al-Sisi to lead the country. They backed him in the 2014 presidential elections, and held conferences and seminars in praise of the military, grateful for his and the military's role in ousting Morsi and the Brotherhood from power. Shebrawi remarked, “Sufis will always be ready to stand with President Abdel Fattah al-Sisi, if needed.”

Also after the revolution, Sufis began founding affiliated parties, among them the Egyptian Liberation Party, most of whose members belong to the Azamiyah Order. The Sufi Twelver order established the Nasr Party, and the Egyptian Renaissance Party includes members from assorted Sufi orders, including the Shebrawi, the Rifai and Tijaniyyah.

The predominantly Sufi parties failed to win parliamentary seats in 2012, but in 2015, individual Sufis joined other partisan slates, and after election to parliament, a number of them were appointed or elected to leadership positions. Of note, in addition to Qasabi's elevation, Sayed al-Sharif, head of the Syndicate of al-Ashraf, a Sufi committee that works to identify descendants of Prophet Muhammad’s family, was elected first deputy speaker of the parliament.

Parliamentarians from the ultra-conservative Islamist Nour Party declined to comment on the record about Qasabi’s election as majority leader. One of them, however, said to Al-Monitor on condition of anonymity, “There is no space for verbal insults or Salafist-Sufi disputes in parliament. The pressing matters of Egyptian society do not allow such disputes.”

Tarek el-Kholy, a member of the Support Egypt Coalition's political bureau and foreign relations secretary of the Nation’s Future Party, said Qasabi was elected leader of the majority coalition because he is influential as a political leader and parliament member.

“Qasabi's spearheading the sheikhs of Sufi orders contributed to his chances of occupying the leadership,” Kholy remarked. “Sufi orders are influential national groups, representing an authentic part of Egyptian political life. They have followers and popular bases and are spread across Egypt.”

He also noted, however, that the Egyptian constitution forbids religion-based political parties — a point of controversy as some parties formed after the 2011 revolution appear to be in violation of this provision — so Sufis will continue to participate in political work and decision-making through their integration into various political parties. “We are proud that Sufi figures have attained leading positions,” he remarked.