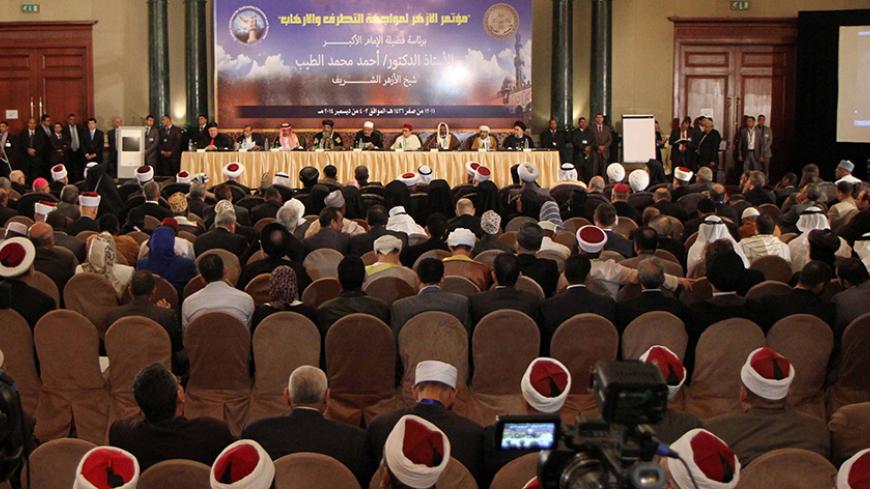 Muslim scholars and popes of eastern churches attend the conference "Al-Azhar in the face of terrorism and extremism" in Cairo, Dec. 3, 2014. - REUTERS/Al Youm Al Saabi Newspaper

CAIRO — On the occasion of the Prophet Muhammad’s birthday, President Abdel Fattah al-Sisi on Jan. 1 gave a speech in which he called for a religious revolution against extremism. He said there are ideas and texts in Islam that have been sanctified over hundreds of years and cannot be ignored. These erroneous ideas, however, have painted a bad picture of the Muslim nation as one characterized by killing and destruction, he said. It has been almost five months since Sisi's speech, in which he also blamed Al-Azhar for rekindling such religious rhetoric. Although the goal of Sisi’s speech was to encourage tolerance and eliminate sectarian polarization, each Islamic current interpreted his words to suit its own ideas and beliefs.

The Salafists, among them Sheikh Mohammed al-Abasiri, demanded the cancellation of Sufi holidays because of their alleged unethical and un-Islamic practices. Meanwhile, Sufi sheikhs, including Mohammed al-Shabrawi, called for the rejection of Salafism, because, he claimed, the Wahhabi ideology is the main reason behind the spread of terrorism in Egypt.

Secularists meanwhile launched fierce verbal attacks against Al-Azhar, blaming its sheikhs for the country’s problematic religious discourse. The Al-Azhar sheikhs retorted that the secularists were trying to strip Egypt of its Islamic identity. The Muslim Brotherhood rejected Sisi’s call, which it said was directed against Islam, accusing Sisi of being unjust to Muslims and asking Muslims to disregard their holy texts.

In an April 2015 speech at the Egyptian Military Academy, Sisi said that his call for religious reform had been incorrectly interpreted.

Ahmad Karima, professor of comparative jurisprudence at Al-Azhar University, told Al-Monitor, “Religious discourse can be divided into two parts. The Sharia texts, which are the Quran and the authentic hadith, constitute the first part, and one cannot go against them. The second part entails the Muslim scholars’ understanding of these texts, and this understanding is debatable and amendable.”

Karima said religious discourse can be modernized through education reform, especially the reform of texts that rely on inaccurate information passed down for generations. Karima cited the “History of the Prophets and Kings” as an example of a historical source that includes false information, such as that Abu Bakr al-Sadiq was the first caliph to burn a man to death.

Karima also claimed that it is important that only academics specialized in Islamic preaching be allowed to speak publicly in places of worship and that unqualified individuals, like many Salafists, be forbidden to preach. According to Karima, Al-Azhar graduates in audiovisual and printed religious media should be put to work in this respect, because the religious media arena is so chaotic that anyone can become involved in it.

The Islamic researcher Islam al-Buhairi disagreed that it should be Al-Azhar’s mission to modernize religious rhetoric. “The only obstacle to the reform of religious rhetoric is Al-Azhar itself,” he told Al-Monitor. “It cannot rectify anything because ideological corruption stems from within [that very institution]. How, then, can the reform take place?”

He further stated, “Sisi has asked Al-Azhar men four times on different occasions to modernize religious rhetoric, but they did not move a finger, and they won’t. This is what pushed me and other thinkers to assume this responsibility.”

Mohammad al-Shahat al-Jundi, a member of the Islamic Research Council and former secretary-general of the Supreme Council for Islamic Affairs, told Al-Monitor, “After Sisi’s call for a religious reform revolution, Egyptian media [began spreading] the opinions of non-specialists, questioning the holy hadith and mocking the Prophet's companions in a way that does not reflect wisdom, truthfulness or professionalism. [They propose] such religious hypotheses [that] carry an underlying organized and deliberate campaign to push Al-Azhar into a manufactured conflict. The aim is to distract Al-Azhar from its pivotal role in fighting takfir, sectarianism and division at a highly critical time for the Muslim nation and for the country.”

Mohamed Zaki, secretary-general of the Supreme Committee for Islamic Preaching at Al-Azhar, which oversees Islamic preaching globally and locally, told Al-Monitor that the committee, which includes several government ministers, including the minister of education, has not convened since 1983. Since he became committee chair, almost a year ago, he has asked Al-Azhar’s sheikh several times to call a meeting, but there has been no response.

Nader Bakkar, co-founder of the Salafist Nour Party, told Al-Monitor, “The failure of the religious reform revolution stems from the lack of a unified and grounded scientific discussion. Each party has its own perspective and driving forces and is not willing to cave in to maintain the trust of its advocates. The heritage books constitute a good starting point for this revolution. Al-Azhar clerics, intellectuals and researchers from outside Al-Azhar, in addition to statesmen who have the executive power to set scientific foundations, can meet to reform heritage books and eliminate the parts that are now only applicable to the distant past. Some opinions [expressed by] Islamic scholars are correct, while others are relative or belong to certain eras. Other opinions are just plain wrong, because people can make faulty judgments.”

Sheikh Mohammed Abu al-Azayem, head of the World Federation of Sufi Orders, said, “Closing the door on juristic deduction has resulted in this backwardness in the religious rhetoric. The Muslim people have become bound by ideas that date back a thousand years, such as the [outmoded] four imams’ approach adopted by the Salafists.”

The modernization of Islamic rhetoric remains lost amid the slew of ideologies in Egypt and various media-driven representations, some of dubious value.