Al-Azhar refuses to consider the Islamic State an apostate

Al-Azhar's refusal to declare the Islamic State an apostate has triggered scrutiny at the growing Salafist faction in the institution. 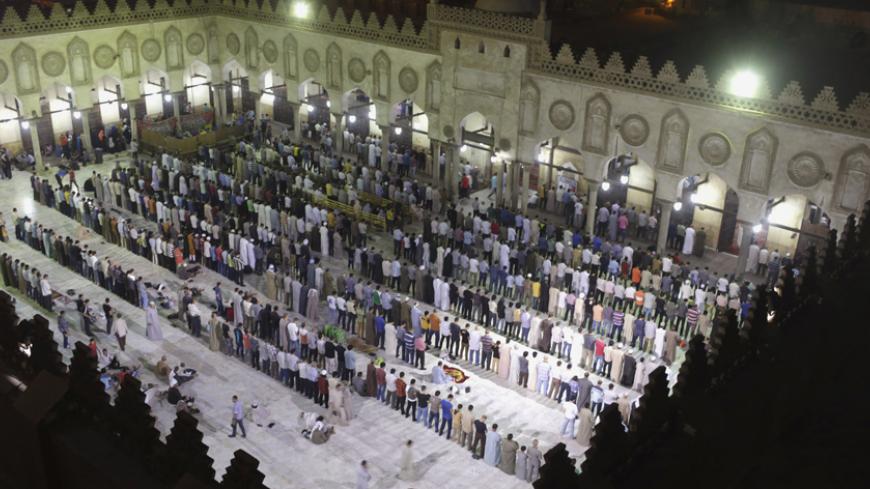 Egypt’s Al-Azhar issued a statement Dec. 11, 2014, refusing to declare the Islamic State (IS) apostates. “No believer can be declared an apostate, regardless of his sins,” it read. Al-Azhar's statement came as a Nigerian mufti seemingly declared IS apostates at a Dec. 4, 2014, Al-Azhar conference. Al-Azhar stated that various media outlets had misrepresented the mufti's speech.

The sheikh of Al-Azhar, Ahmed al-Tayeb, repeated his rejection of declaring IS apostates on Jan. 1, during a meeting with editors-in-chief of Egyptian newspapers. This sparked criticism from a number of religious, political and media parties, especially since Al-Azhar could have renounced the Nigerian mufti’s statement on IS without addressing the issue of whether or not Al-Azhar considers the group apostates.

In press statements, Al-Azhar representative Abbas Shoman said that the institution had not declared any person or group an apostate throughout its history. Yet, this claim was refuted by the daughter of late Egyptian author Farag Foda, Samar Farag Foda, who called into an Egyptian satellite TV program, saying, “My father’s assassination came as a result of fatwas issued by the majority of Al-Azhar’s sheikhs declaring him an apostate, because he had called for the separation of religion from politics.”

Al-Azhar’s leaders — the grand mufti and the Council of Senior Scholars — have actually never declared any person or group an apostate throughout Al-Azhar’s history, yet they have not taken any measures against Al-Azhar figures who have issued fatwas to that effect. Prominent fatwas include those by Al-Azhar’s Scholar Front, headed by Sheikh Abdul Ghaffar Aziz, who declared Foda an apostate on June 1, 1992. The Scholar Front comprises sheikhs who are considered radicals and supporters of ousted President Mohammed Morsi. Aziz was the dean of two of Al-Azhar’s colleges and among those who drafted the curriculum for Al-Azhar University. Sheikh Abd Rabbo Muftah, an inspector in the Department of Preaching at Al-Azhar, issued another notable fatwa declaring Egyptian writer Taha Hussein an apostate in 1926. Furthermore, a committee of 20 Al-Azhar scholars declared scholar Nasr Hamid Abu Zayd an apostate and demanded that he repent for the ideas that appeared in his studies. In 1995, the Egyptian judiciary charged Abu Zayd with apostasy and forcibly divorced him from his wife, forcing the couple to emigrate.

Tharwat al-Kharbawy, a Muslim Brotherhood defector, attributed Al-Azhar’s refusal to declare IS apostates to its “faith in IS’ actions,” during an interview with Ibrahim Issa on satellite TV.

One press report noted a degree of similarity between IS thought and Al-Azhar University's curriculum, which “allows for killing a Muslim who does not pray, one who leaves Islam, prisoners and infidels within Islam [those who do not have a clearly specified creed or sect]. [It also allows] gouging their eyes and chopping off their hands and feet, as well as banning the construction of churches and discriminating between Muslims and Ahl al-Kitab [Christians and Jews], and insulting them at times.”

Ahmad Ban, a researcher of Islamic Affairs, told Al-Monitor that IS' and Al-Azhar's philosophies overlap, even if their practices on the ground differ. According to him, the overlaps could stem from President Abdel Fattah al-Sisi’s call for a religious revolution against certain texts that are considered sacred. Although these texts are not considered core texts, they represent a religious heritage encompassing hundreds of years. According to the Salafist Call, Al-Azhar and some terrorist groups like IS, these ideas cannot be subject to criticism, despite the fact that they are currently “causing concern to the whole world,” as Sisi said Jan. 1.

The Salafist Call issued a statement Dec. 11, 2014, supporting Al-Azhar’s refusal to declare IS apostates. They attacked some of Al-Azhar's critics, saying they were seeking to destroy its important role in protecting Egypt. Ban said, “Some of Al-Azhar’s approaches, including its refusal to deem IS apostates, could be due to the presence of a Salafist lobby within Al-Azhar.” This notion was shared by Saadaddine al-Hilali, a professor of comparative jurisprudence at Al-Azhar University.

The Salafist Call issued its statement in support of Al-Azhar despite a video leak on Dec. 24, 2012, depicting disputes between the Salafists and Al-Azhar. The video was shot during a closed meeting between vice chairman of the board for the Salafist Call, Yasser al-Borhamy, and a number of Salafist sheikhs. In the video, Borhamy said, “Through their participation in the Constituent Assembly to draft the 2012 Egyptian Constitution, the Salafist currents tried to insert articles that would allow for ousting Al-Azhar’s Grand Mufti Ahmed al-Tayyeb at the earliest opportunity.”

Hilali told Al-Monitor, “Al-Azhar is an independent [institution] under the constitution, and it has the right to issue any fatwas and statements it wants. However, it would have been better for it to absolutely reject declaring anyone an apostate, rather than reject this for IS alone. By doing the latter, it has given itself the right to declare other persons or groups apostates if it wants, even though no one has this right.

“I’m worried about Al-Azhar retaining the ‘weapon’ of deeming persons or groups apostates, which makes it akin to churches in medieval times that monopolized religious discourse and made themselves the guardians of man’s relationship with God. The prevalence of local and international propaganda depicting Al-Azhar as the sole entity that speaks for moderate Islam could lead to this being the case. Some of this propaganda came from the US, when Secretary of State John Kerry announced that the US sought to activate Al-Azhar’s role in fighting extremism, despite the fact that it includes a number of extremist Brotherhood members and Salafists. Thus, I want to stress that Al-Azhar’s fatwas do not reflect true religion. Rather, they are the ideas of its grand mufti or Council of Senior Scholars, and [these fatwas] are binding only to those who accept them.”

Al-Azhar, which does not comment on the apostate fatwas issued by some of its scholars, confirmed its rejection of deeming IS apostates. Perhaps Al-Azhar leaders fear delving into the issue of fatwas expressing Al-Azhar’s rejection or faith in some IS ideas, or due to the presence of a Salafist lobby within Al-Azhar that was behind this statement.

The controversy surrounding Al-Azhar’s statement on IS may not dissipate until a review is carried out of Al-Azhar’s structure and curriculum. Concerning the latter, in September 2014, the US Embassy in Egypt's charge d’affaires announced that he sought to increase US scholarships for some Al-Azhar students seeking to obtain master's degrees and doctorates, even though Al-Azhar’s curriculum currently includes “calls to violence.”

by Murielle KASPRZAK and Joseph SCHMID | AFP | May 26, 2022
END_OF_DOCUMENT_TOKEN_TO_BE_REPLACED