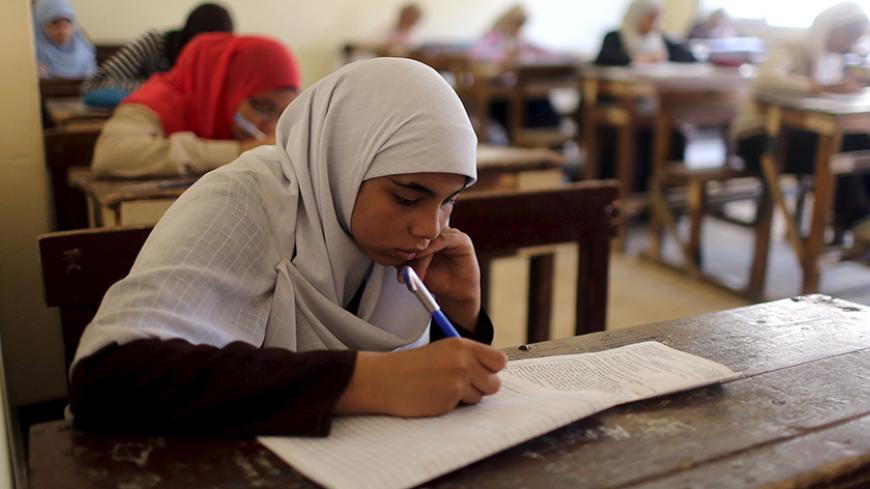 Students take an exam in one of the Al-Azhar institutes in Cairo, May 20, 2015. - REUTERS/Asmaa Waguih

CAIRO — Al-Azhar is preparing to fight extremism and terrorism in the wake of accusations of negligence in countering extremism and calls for the renewal of religious discourse.

Al-Azhar has created an online observatory to reply to terrorists’ allegations in different languages. In the same context, the Ministry of Religious Endowments held training classes for young imams to familiarize them with online communication tools, empowering them to correct misconceptions about Islam.

Al-Azhar's ability to be effective in cyberspace depends on its acquisition of technical capabilities equal to those of terrorist organizations, especially the Islamic State.

On June 2, Grand Imam of Al-Azhar Sheikh Ahmed al-Tayeb inaugurated the Al-Azhar observatory, which aims to monitor the erroneous ideas that terrorist groups promote on their websites in several languages and prepare academic responses to educate the youth about these destructive ideas.

The Ministry of Religious Endowments held a class June 6 to train 300 young imams on correcting Islamic misconceptions through Facebook and WhatsApp, and to train young preachers on effective dialogue with others.

Sheikh Ahmet Turk, the director of imam training at the ministry, told Al-Monitor that there is a new generation at the ministry, one familiar with technology and social networks. He stressed the need to focus on direct communication with the youth and not on holding conferences, workshops and recommendations that are usually not implemented.

This is why the class is important, according to Turk. He said, “I bring the youth, I get to know their way of thinking. I answer the thorny questions and create a communication channel with them.” Turk prioritizes creating a balanced religious discourse that reaches out to the youth. He added, “There is a Facebook page focusing on correcting misconceptions, in addition to WhatsApp. It is a place where the imams get together on any questions.”

He said that the class offers instructions to help and answer the questions of anyone having problems or erroneous ideas, such as deeming others apostates. Turk confirmed that the class is designed for imams whose ages range between 25 and 40. He explained that the imams “at this age deal with the youth. This is while the other generations rely on different approaches such as conferences, workshops and mosques.” He regrets that in general, religious institutions in Egypt do not have a modern way of thinking in line with the youth.

Turk stressed that there is nothing preventing religious institutions from implementing a more modern strategy, and that he hopes this push will be an institutional rather than a personal effort.

Turk said that any strategy for renewing religious discourse must necessarily involve several axes, including restructuring institutions to cope with the current situation financially and administratively “and modern training — which the ministry is seeking at present — restructuring the teaching curriculum and Islamic heritage.”

Turk stressed that all Egyptian religious institutions, such as Al-Azhar, Dar al-Ifta and the Ministry of Endowments, are cooperating in terms of communicating with the youth and working to transmit their message from the mosques into cyberspace, as it is important to counter online terror groups intellectually.

Al-Azhar representative and deputy to the Grand Imam Ahmed al-Tayyeb Abbas Shouman said that the online observatory, with versions in 10 languages, is a new experience. He told Al-Monitor, “It monitors all suspicious and erroneous ideas that terrorist groups promote among the youth, such as the Islamic Caliphate, based on evidence taken out of their contexts.”

Shouman added, “We prepare the refutations and post them in the same language as [the ideas were initially] posted on the website.”

As for the target groups, Shouman said that the “observatory focuses on the youth, which uses modern technologies.” According to him, although Al-Azhar does not have the same means and online tools IS enjoys, the observatory is a step forward for the institution’s presence on social media.

Shouman said, “The challenges that will face them are the preparation of skillful academic replies, which may require a long time, and the use of languages other than those used in the observatory.” Shouman called for technical support and access to information, while stressing the need to reply suspicious ideas in the form of a dialogue.

George Fahmy, a visiting scholar at the Carnegie Middle East Center in Beirut since 2014, talked to Al-Monitor about the assumption that young people join jihadist groups because they initially adopt jihadist ideas. Fahmy considered this idea incorrect. He explained, “In many cases, the youth join Salafist jihadist groups for other reasons, namely economic and political ones, social frustration and injustice against Muslims.” In these cases, religious thought is not what pushes the youth toward violence, according to Fahmy.

Fahmy said that Al-Azhar, Dar al-Ifta and the Ministry of Endowments have assumed an important role in containing the anger and frustration of the youth. He noted, however, that countering extremist groups cannot be achieved online, because the youth who have already made the decision to join them will not be browsing the Endowments and Dar al-Ifta pages. Rather, work must be done on the ground, and the activation of the mosques’ role as not just a place of prayer but also a socio-religious center. He pointed out that Al-Azhar has the ability to be publicly present on the ground, contrary to IS.

He also called for the independence of religious institutions from the state — especially since they are politicized — so that the youth do not lose trust in them.

Al-Azhar is renewing its religious discourse and developing its tools to take on the Internet. However, it still focuses on the importance of preserving religious constants, without defining what they really are and why they are important. Al-Azhar’s scholars also still consider themselves the only moderate Islamic Sunni representatives and resist any criticism of them or their role.