US, Europe pledge $500 million at COP27 for clean energy transition in Egypt

As COP27 continues in Egypt's Sharm el-Sheikh, dozens of countries have announced investments in climate-related projects including a $500 million package to help Egypt decarbonize. 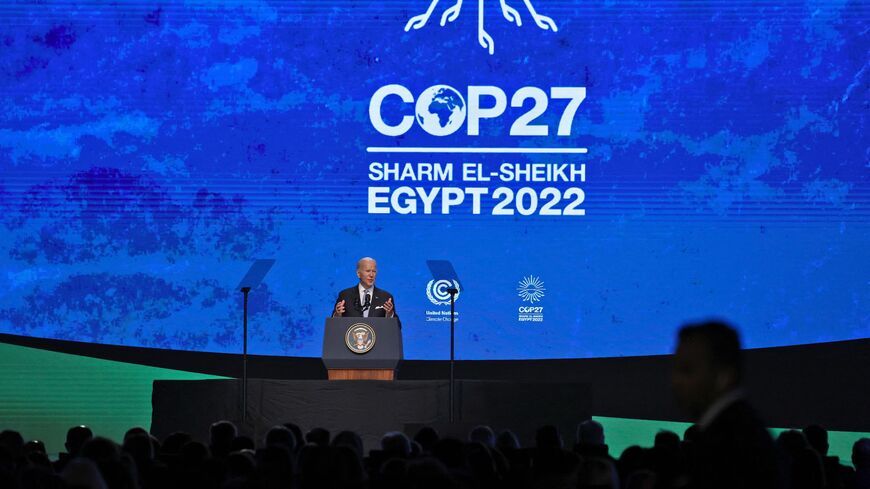 CAIRO — In his Nov. 11 speech at the 2022 United Nations Climate Change Conference (COP27) in Egypt’s Red Sea resort city of Sharm El-Sheikh, US President Joe Biden announced that his country will contribute along with the European Union and Germany to a $500 million pledge to finance Egypt's transition to clean energy.

The financing package, Biden said, “will enable Egypt to deploy 10 gigawatts of renewable energy by 2030, while bringing offline 5 gigawatts of inefficient gas-powered facilities, reducing emissions in Egypt and [the] power sector by 10%.”

Rakha Hassan, a former assistant to the Egyptian foreign minister and member of the Egyptian Council for Foreign Affairs, told Al-Monitor, “Biden’s attendance at the climate summit in conjunction with the US midterm elections attests to the strong US-Egyptian ties. Biden praised Cairo for being a key pillar of stability in the Middle East and appreciated its efforts to stop the fighting in the Gaza Strip months ago.”

Hassan added, “The US president's pledge to support Cairo with $500 million to help it transition to green energy sends out a message that despite the differences on some issues with Egypt, most notably on human rights violations, the bilateral strategic relations and political and military cooperation between the two countries will remain unhindered.”

According to Egyptian presidential spokesperson Bassam Radi, Biden met with his Egyptian counterpart Abdel Fattah al-Sisi on Nov. 11 on the sidelines of the COP27. The two leaders discussed a number of issues, including the latest developments in Palestine, the fight against terrorism and radicalism and the global repercussions of the Russian-Ukrainian war, especially in the food and energy sectors, as well as the Libyan crisis and the stalled negotiations over the Grand Ethiopian Renaissance Dam.

Within the framework of COP27, more than 20 countries announced investments in climate-smart agriculture and food systems innovation. The Agriculture Innovation Mission for Climate, a global initiative launched at COP26 by the United Arab Emirates and the United States, announced during the summit that it was doubling investments in these fields from $4 billion to more than $8 billion.

On Nov. 12, COP27's Adaptation and Agricultural Day, the Egyptian government launched an initiative called “Food and Agriculture for Sustainable Transformation.” The initiative aims to boost contributions to financing for agriculture and food systems, especially for the most vulnerable countries.

Egypt's Minister of Environment Yasmine Fouad, who is Cairo's ministerial coordinator and climate envoy for COP27, stressed in her opening speech for the Nov. 12 session the “need to place agriculture and food security at the heart of climate change negotiations to meet human needs.”

Fouad warned that according to global reports, more than 173 million people will suffer from drought and 43 million people will live in poverty in the coming years due to global warming. “This is a warning call to the whole world of the need to pay attention to the climate changes that are taking place and their devastating effects on the world,” she said.

Reuters reported Nov. 13 that “India wants countries to agree to phase down all fossil fuels at the COP27 climate summit in Egypt, rather than a narrower deal to phase down coal as was agreed last year.”