As Egypt prepares to host the COP27 conference, it's getting help from China to transform Sharm el-Sheikh into a green city. 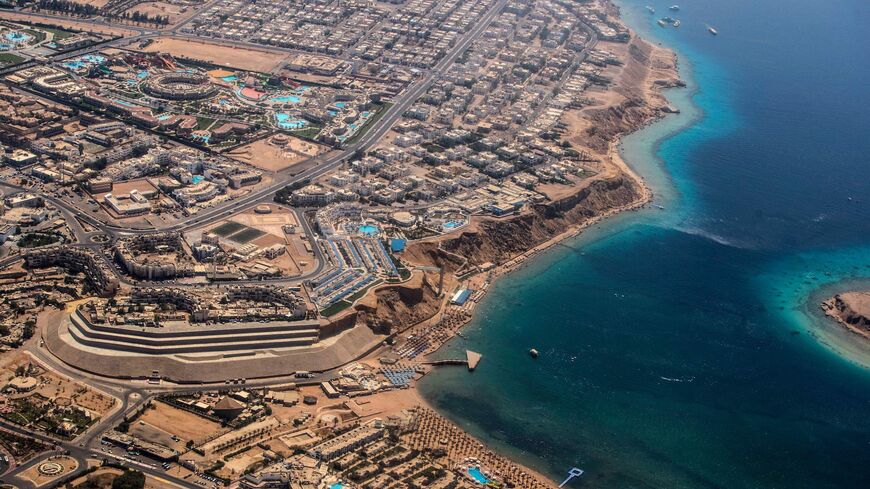 This picture taken on Sept. 27, 2021, shows an aerial view of residential lots and luxury hotels in the Hadaba district of the Egyptian Red Sea resort city of Sharm el-Sheikh at the southern tip of the Sinai Peninsula. - KHALED DESOUKI/AFP via Getty Images

CAIRO — In a virtual ceremony July 27, China dispatched its first shipment of equipment to the Egyptian Ministry of Environment in a bid to support Egypt’s efforts to confront climate change.

The event comes as Egypt prepares to host the UN Climate Change Conference 2022 (COP27) in Sharm el-Sheikh in November.

Speaking at the ceremony, head of the Egyptian Environmental Affairs Agency Abu Sunna said, “The grants provided by the Chinese Ministry of Environment to the Egyptian Ministry of Environment to address the effects of climate change are goods that enhance energy efficiency in Egypt, as one of the basic technological solutions ensuring the use of sustainable and renewable energy resources for reducing global greenhouse gas emissions and increasing the efficiency of energy consumption, thus preserving our natural resources.”

Abu Sunna explained that the Chinese equipment includes solar streetlights, home solar systems, LED lights and energy-saving air conditioners. He said that Egypt "looks forward to China's participation in [COP27] as an effective international partner looking to find realistic solutions to global climate change issues" and "achieve the principles of the Paris Climate Agreement, among other climate agreements, as well as the transition to a green economy.”

Hossam Muharram, a former adviser to the Egyptian minister of environment, told Al-Monitor, “Cooperation between the countries of the world is one of the most important mechanisms for confronting environmental challenges in general and facing the phenomenon of climate change in particular, as this is the greatest threat to human existence.”

He noted “the great technological progress that China has made in recent decades” but added that it is important for Egypt to work on localizing the industry in Egypt.

“Egypt should not be satisfied with merely importing equipment, as this modern technology should be localized, considering that Egypt has industrial and research institutions capable of taking on this role, namely the Arab Organization for Industrialization factories as well as Egyptian research centers and the private sector,” he added.

Saber Othman, former director of the climate change department at the Egyptian Ministry of Environment, told Al-Monitor, “China is working to support Egypt because it has advanced technologies capable of improving energy efficiency and generating energy from renewable sources. This support will help Egypt transform the city of Sharm el-Sheikh into a green city ahead of the COP27. It also fits in with China's plans to demonstrate Beijing's efforts to confront the effects of climate change, be it by reducing carbon emissions that cause and exacerbate the phenomenon globally or by adapting to the effects of climate change affecting biodiversity.”

In a July 27 statement, the Egyptian Ministry of Environment said the Chinese grant comes within the framework of Beijing's 2015 “Assistance to the Countries of the South” program.

Othman said, “Turning Sharm el-Sheikh into a green city is of paramount importance for Egypt, since this city will serve as the headquarters of the international forum hosting the COP27, which will be attended by many state leaders and international officials as well as many representatives of civil society and the private sector. It is important for all of these attendees to learn of Egypt's capabilities to deal with the climate change crisis.”

He stressed that China will play a prominent role in both the conference and implementing the ideas developed there.

In May 2021, the Rhodium Research Group reported that China caused 27% of the greenhouse gas emissions in the world during 2019, exceeding the emissions of major industrialized countries. In 2020, China pledged to achieve zero emissions by 2060.

Othman said, “China, which has the highest population in the world with nearly 1.5 billion people, should not bear the cost of confronting climate change alone, especially considering that other industrialized countries such as the United States have also contributed to this phenomenon.”