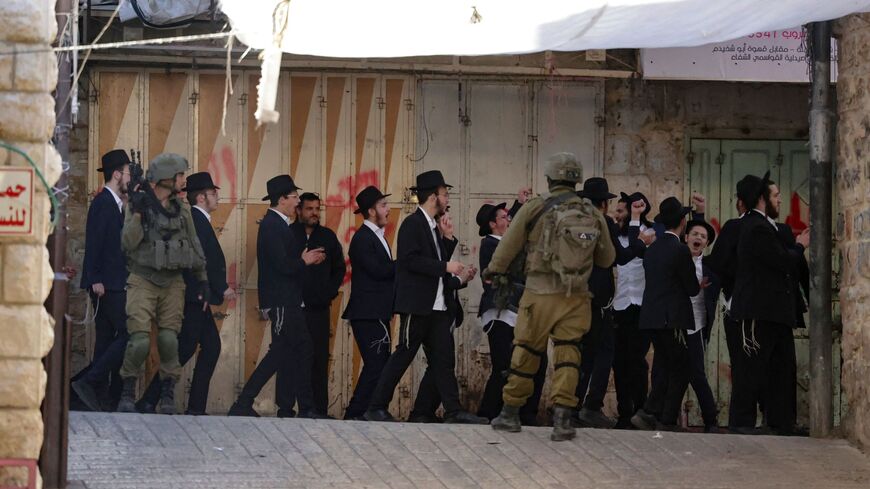 Israeli security forces stand guard as Jewish settlers look toward Palestinian residents, on their way to visit the tomb of Othniel ben Kenaz in the area H1 (controlled by Palestinian authorities), in the occupied West Bank city of Hebron, on Nov. 19, 2022 - HAZEM BADER/AFP via Getty Images

TEL AVIV — Jewish Power leader Itamar Ben Gvir has yet to take over the Ministry of National Security, as per the coalition agreement he signed with Prime Minister-elect Benjamin Netanyahu. Nevertheless, he is already attempting to take control over a Nov. 25 incident involving IDF soldiers in Hebron, who clashed with a group of leftwing activists.

One soldier was filmed pushing members of the group, who were visiting the city and meeting with some Arab families, telling them that, “Ben Gvir will restore order here,” and “Watch out, leftists. I’m going to tear you apart.” At the same incident, one leftwing activist was hit in the face, grabbed, and knocked to the ground by another soldier.

IDF Chief of Staff Aviv Kochavi was quick to condemn the soldiers’ behavior. In a special missive sent to the troops this weekend, he wrote, “Any incident of physical or verbal violence on the part of IDF soldiers is against the values ​​of the IDF and its orders.”

The right threw its support behind the imprisoned soldier, saying that he was a victim of intentional provocations by a group of “anarchists.” Supporters of the political center and left expressed shock and outrage over the soldier’s behavior and political statements. The visitors themselves claimed that this is a direct result of encouragment by Ben Gvir even before he takes over the Ministry of National Security (the new name for the Ministry of Public Security).

The punishment added fuel to the political fire. At the forefront of the group supporting the soldier’s behavior was none other than Ben Gvir himself. In a series of controversial statements, he called on Kochavi to reconsider the sentence. Ben Gvir also visited the soldier’s father and shot a film clip with him, which was distributed across the various social network platforms.

But despite the pressure from the right, the commander of the soldier’s brigade left his punishment intact. In response, Ben Gvir said Kochavi and the IDF’s top brass had “crossed a red line and sent the message that they are willing to hurt IDF troops.”

Kochavi addressed Ben Gvir directly in an even sharper rebuke:
“We will not allow any politician, neither from the right nor from the left, to interfere in command decisions and use the army to promote a political agenda. Political interference in the IDF directly harms the army’s ability to carry out its tasks, and its legitimacy.”

Outgoing Prime Minister Yair Lapid had also condemned the incident immediately on Nov. 25. Today he repeated that, and warned that “the new government has not yet taken office and its ministers are already inciting the IDF soldiers against their commanders. The unrestrained incitement led by ministers and Knesset members alike against the Chief of Staff, the Commander of the Central Command, and Battalion Commander Aviran Alfasi is dangerous and destructive, and responsibility for it lies on the new government.”

In contrast, Netanyahu waited until this morning to react to the incident, keeping his statement short and very general. “The IDF is the people’s army. I call on everyone, from the right and the left, to keep us out of any political disputes,” he tweeted.