The tremendous public protest generated by footage of a soldier cocking his firearm at a Palestinian youth is directed not at the IDF, but the political echelons. 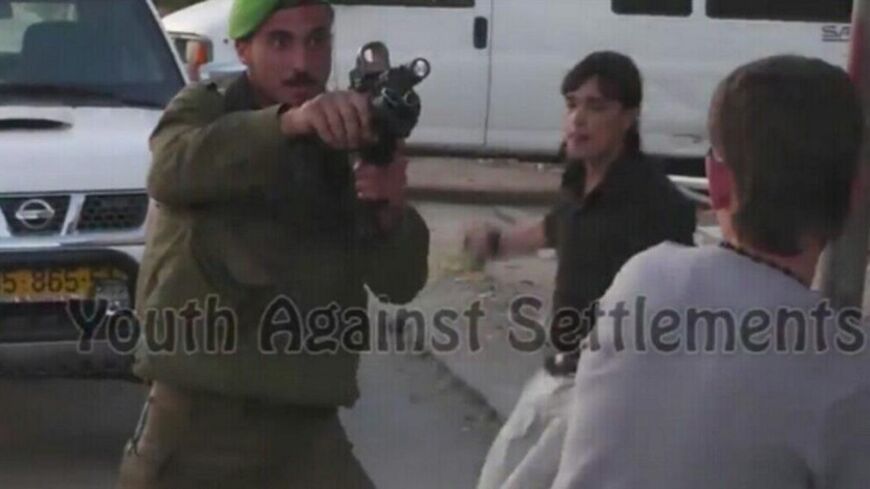 A still from video of the incident shows David Adamov cocking his weapon as the Palestinian youth brandishes brass knuckles, April 29, 2014. - Youtube/Youth Against Settlements

It was only a matter of time before the chairman of the HaBayit HaYehudi Party, Economy and Trade Minister Naftali Bennett, understood the potential of the mass protest that erupted on social media April 29 in support of David Adamov, a soldier in the Israel Defense Forces (IDF) Nahal Brigade, nicknamed “David the Nahlawi.”

Adamov was filmed in the West Bank town of Hebron cocking his rifle at a Palestinian youth who confronted him while holding brass knuckles. Bennett stormed onto his Facebook page, embracing David in a warm post in which he said he would have done the same. By so doing, Bennett gave the incident political overtones, appropriating David the Nahlawi for the right wing. He was joined by several Knesset members from the extreme right, such as Orit Strock and Moshe Feiglin, who "liked" the post and took pictures of themselves with signs reading "I, too, am with David the Nahlawi."

As of May 2, the number of likes on the Facebook page titled “I, too, am with David the Nahlawi” had reached 122,000, with more to come. The Nahal Brigade soldier has become a hero. The clip was filmed by a photographer on behalf of the "Youth against settlements" movement, and found its way to Israeli TV Channel 10. People assumed that Adamov, who was sentenced on the same day to 20 days in jail for violent behavior toward his commander, was punished because of the filmed incident. From that point it was only a short period of time until the IDF experienced its first outburst of digital protest.

The IDF, which was caught unprepared in the face of the tremendous wave of protest that spread on social media networks, tried to explain that David the Nahlawi was not punished at all over the incident in Hebron, but to no avail. Within a day, the soldier had turned into a symbol of the impossible reality with which younger soldiers — 18 or 20 years old — are forced to contend with in the territories.

Unlike other clips distributed recently on social media, showing IDF soldiers helpless in the face of provocations by young Palestinians in the territories, this time the clip portrayed a determined soldier who did not hesitate to cock his assault rifle, but is “punished” for having done so. Combat soldiers who started the protest on the web were, in fact, directing a distress call at those who send them into complex and volatile situations without backing them up.

Anyone who has served in the territories in recent years, since documentation tools have become more sophisticated and the use of social media networks has turned into a weapon in the struggle against the occupation on the part of Palestinian and Israeli left-wing organizations, knows such situations from up close. Quite often these are clear provocations: The soldier is expected to keep his cool since a violent reaction can turn into an international propaganda incident. That is a heavy load to bear. This was the raw nerve hit by the Adamov incident, which enabled the soldiers’ protest to burst forth.

The term “soldiers” includes recently discharged soldiers backpacking around the world, family members of soldiers carrying out their compulsory service and those who have already finished their term of service, reserve officers and simply citizens in whom David the Nahlawi stirred basic feelings of national pride. Such an extensive protest has a lot of power, reflecting for the most part an authentic happening with which the IDF must learn to contend. But the message is directed mostly at the diplomatic and political echelons, which deploy very young soldiers in places that generate conflicts on a daily basis.

Prime Minister Benjamin Netanyahu is not a great fan of social media networks. He has Facebook and Twitter accounts because it’s required nowadays, but he still prefers traditional media. It does not take a wild guess to deduce that his interest in the soldiers’ protest came only after the fact, once it had made front-page headlines and the top of news broadcasts. It’s also no secret that if he could, he would have retained for eternity the current situation between Israel and the Palestinians: a type of negotiation which apparently shows a will on his part to resolve the conflict, coupled with a security lull that “drugs” everyone, especially the Israelis who keep voting for him — a harmless status quo that does not challenge the left wing.

In an interview with Ephraim Sneh published in Al-Monitor last week, the former Labor Party minister explained how the Israeli government had managed to brainwash the Israelis, to convince them that there’s no Palestinian partner and, in fact, to neuter the two-state-solution discourse and thereby to cause the public to lose interest in the conflict and in the leaders of the other side.

And this is exactly where the power of the protest generated by David the Nahlawi lies. It places a mirror in front of the Israeli leadership, and especially in front of Netanyahu’s face, by enabling us to see the difficult and ugly reality that we force on our young soldiers by the hour.

The fancy words about diplomatic negotiations, the public diplomacy campaigns and the security quiet come crashing down with one documented incident, in which death or injury is not even needed to sum up the explosive nature of the conflict. One small incident has signified to the political echelons that there isn’t really a status quo, that reality has a way of rearing its head, that one cannot hide from the world and the Israeli public what occurs in its backyard — certainly not in the digital age.

Therefore, the protest isn’t directed at the IDF command. This is a protest against the political echelons. From the moment the right wing embraced David the Nahlawi as a symbol, it also brought to the fore once again the diplomatic dichotomy between right and left, and the question of the division of the land.

Without meaning to, David the Nahlawi has contributed to sparking a substantive debate once the support and protest party dies down — a debate over the future of the territories, including the basic questions that the Israeli public must ask itself regarding the conflict.

Resolution of such broad national conflicts requires a trigger. This can be a violent intifada, but it can also be a widespread social media protest that exposes Israelis to a reality in which the conflict is not dead, rather, it takes on various forms all the time. The affair is first and foremost a wakeup call for Netanyahu.