Under the newly created position, Jewish Power leader Itamar Ben-Gvir will manage both the Public Security Ministry and the Border Police forces operating in the West Bank. 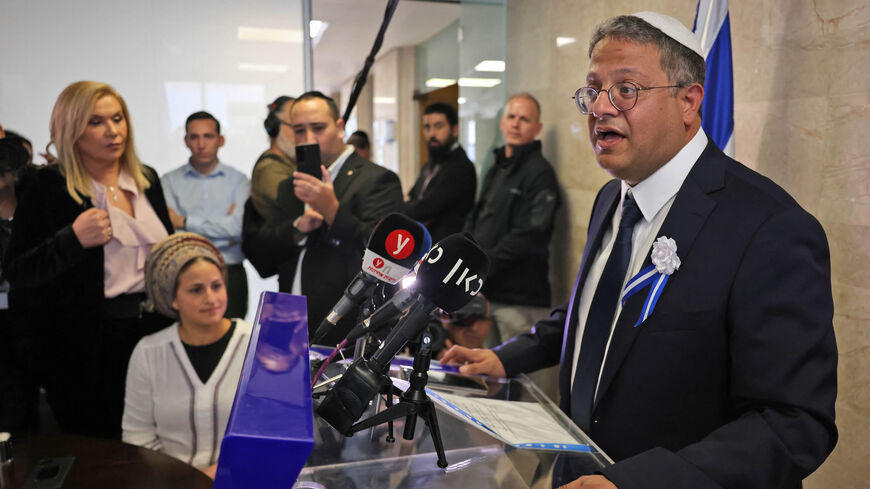 Israeli Knesset member Itamar Ben-Gvir delivers a speech next to his wife Ayala (bottom L) at the Knesset, before a swearing-in ceremony for new members of parliament, Jerusalem, Nov. 15, 2022. - Menahem Kahana/AFP via Getty Images

Jewish Power leader Itamar Ben-Gvir now starts preparing for his new position of national security minister. On Nov. 25, the office of Prime Minister-elect Benjamin Netanyahu announced that he had made serious headway in forming his sixth government by signing his first coalition agreement with the Jewish Power party. As national security minister, Ben-Gvir will also serve in the security Cabinet.

The position of a national security minister is new. It is comprised of the Ministry of Public Security, to which the coalition agreement adds more powers. These include Ben-Gvir assuming authority over the Border Police in the West Bank, which is the main force used to evacuate illegal settlements. The agreement also states that in order to reinforce governability, public order, personal security, and the war against organized crime and protection rackets, an expansive new national guard will be created.

Ben-Gvir’s party, which holds six seats in the Knesset — after splitting with the Religious Zionism party — will also receive two additional ministries: the Ministry for the Development of the Negev and the Galilee, and a newly created Ministry of Jewish Heritage, which will be responsible for all antiquities and heritage sites in Israel and the West Bank areas under Israel’s control.

As expected, the controversial appointment of Ben-Gvir to such a sensitive position involving national security elicited harsh reactions from future members of the opposition.

Current Defense Minister Benny Gantz attacked Netanyahu, saying, “Netanyahu chose disgrace, which will result in a threat to the country’s security.” He promised to wage a fierce battle from the opposition benches to block this destructive attack on Israeli democracy, security and resilience.

Ben-Gvir was just the first piece in the coalition puzzle that Netanyahu is assembling. On Nov. 27, he signed a second agreement, this one with the one-man Noam faction of Knesset member Avi Maoz. It is a religiously conservative, anti-liberal group, which is opposed to LGBTQ rights. According to a statement released by the Likud, a new Authority for National Jewish Identity headed by Maoz will be formed in the prime minister’s office. Maoz will then be appointed deputy minister.

Another agreement is expected to be signed in the coming days with the Religious Zionism party, with its leader Bezalel Smotrich likely to be appointed finance minister.

In response to these developments, Jewish groups in the United States have expressed growing concern over the loss of Israel’s democratic standards. Several Jewish leaders said as much in interviews with the Israeli media.

According to Rabbi Rick Jacobs, president of the Union for Reform Judaism, “For Itamar Ben-Gvir or Bezalel Smotrich to sit in these very important ministries and head some of Israel’s most important ministries would be like putting David Duke, the former head of the Ku Klux Klan in the United States, as attorney general.”

Jeremy Ben Ami, head of J-Street, a prominent liberal, pro-Israel lobby, echoed this sentiment, saying, “I think there is a lot of real concerns about the direction that this new government would take and what it means for Israel-US-Jewish relations.”