Ankara demands “concrete steps” from Sweden and Finland before giving the nod to NATO's Nordic enlargement, including an “asset freeze,” a demand that hasn’t been expressed publicly before. 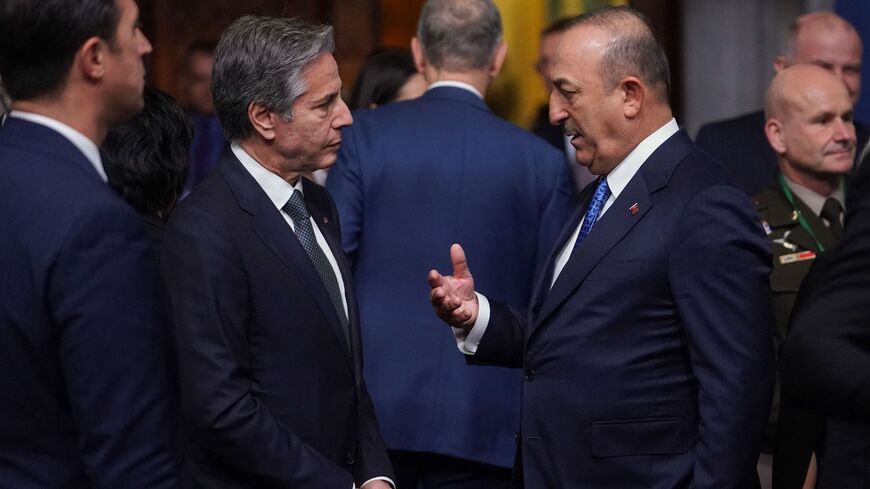 Turkey's Foreign Minister Mevlut Cavusoglu (R) and US Secretary of State Antony Blinken talk ahead of a meeting of NATO Foreign Ministers on Nov. 29, 2022, in Bucharest, Romania. - ANDREI PUNGOVSCHI/AFP via Getty Images

Turkey will wait for more concrete steps — including a freeze of “terror assets” in Sweden and Finland — before giving a nod to the Nordic enlargement of NATO, Turkish Foreign Minister Mevlut Cavusoglu said Wednesday while speaking on the sidelines of the NATO summit in Bucharest.

“We are not dismissing the steps that have been taken so far. However, there have been no concrete steps on some issues such as extraditions and freezing of terror assets,” he said.

Sweden and Finland gave up their neutrality policy in the face of Russia’s Feb. 24 invasion of Ukraine. Turkey demanded security guarantees from both countries in return for its support to the enlargement — a process that requires the unanimous consent of all member states within the 30-member security bloc.

Both Nordic countries pledged to lift arms embargoes against Turkey and address Ankara’s security concerns under a deal agreed upon in June during the NATO leaders’ summit in Madrid. Turkey’s security demands involve restrictions on the activities of groups and individuals that Ankara considers “terrorists,” extradition of dozens of people over their alleged ties with those groups, and finally an “asset freeze” against those groups — a demand that has not been publicly expressed by any Turkish official up until today.

Under the trilateral memorandum signed in June, Finland and Sweden pledged “to investigate and interdict any financing and recruitment activities" of the groups that Ankara considers “terrorists,” including the outlawed Kurdistan Workers Party, an armed outfit fighting for self-rule inside Turkey for some four decades; Syrian Kurdish groups that Turkey equates to PKK; and the Gulenist movement, which is headed by US-based Sunni cleric Fethullah Gulen, who is accused of masterminding the 2016 coup attempt.

The major impasse stems from Turkey’s demands from Sweden as Cavusoglu said earlier this week that the problems they had with Finland were “not that significant.”

Sweden has been a refuge for many dissidents fleeing Turkey over the past decades. It hosts a sizable Kurdish diaspora, with estimates varying between 85,000 and 100,000, some 1% of the total Swedish population.

Stockholm lifted the ban against exporting military equipment to Turkey in September and passed a constitutional amendment tightening its anti-terror laws in early November.

Speaking after a fresh round of talks with his Swedish and Finnish counterparts on the sidelines of the summit on Tuesday, Cavusoglu said his country has welcomed the new anti-terror laws and constitutional amendments that the Swedish parliament adopted earlier this month. “But we also need to see the implementation, and some of those laws will enter into force with the new year,” he said.

US Secretary of State Antony Blinken, whom Cavusoglu also met briefly in Bucharest, for his part struck a more optimistic tone. “I'm very confident – and again, based on what I've heard these last couple of days – that Finland and Sweden will soon be formally new members of the alliance,” he said, speaking at a presser in Bucharest Wednesday.