Hamas says it is not behind rocket attacks from Gaza

Hamas says it is committed to the truce with Israel. 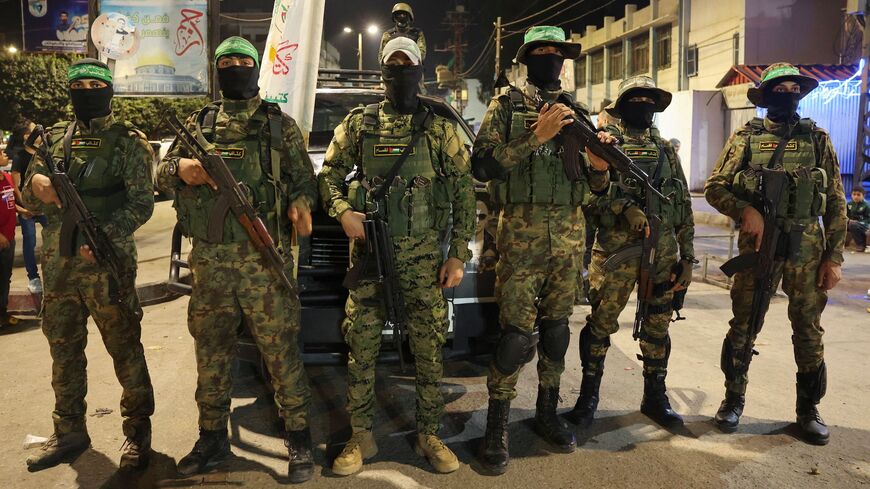 Members of the Palestinian Ezzedine al-Qassam Brigades take part in a demonstration by supporters of the Hamas movement in Rafah in the southern Gaza Strip, on Oct. 27, 2022, against Israel and in support of Jerusalem's Al-Aqsa Mosque and the West Bank. - SAID KHATIB/AFP via Getty Images

“The Palestinian factions have nothing to do with these rockets, which are aimed at giving the occupation an excuse for continuing the aggression,” the source said.

The source stressed that Palestinian factions in Gaza are committed to the joint operations room to coordinate “any response to Israeli aggression.”

In a tweet on Nov. 3, Israeli army spokesman Avichay Adraee announced that rocket alert sirens were activated in southern Israel after a rocket fired from Gaza was detected and intercepted. He added in another tweet that three other rockets heading toward Israel were misfired and landed inside Gaza.

The rockets were the first in three months after the round of fire between Israel and the Islamic Jihad ended in August.

According to Israeli officials, the latest attack came in retaliation for the killing of Farouk Salameh, an Islamic Jihad leader, in Jenin.

In response to the rocket attack, the Israeli army bombed on Nov. 4 an underground site of the Izz ad-Din al-Qassam Brigades, Hamas' military wing, which the army claims was being used for the manufacturing of rocket-propelled grenades.

In a Nov. 4 statement, al-Qassam Brigades said that their “ground defenses repelled the hostile Zionist air force after targeting al-Qassam’s 13th battalion at the entrance to the Maghazi camp in central Gaza with a large number of bombs.”

The brigades stated that they “will remain in the lead in defending the Palestinian people.”

Despite Israeli accusations against Hamas of transferring the military battle to the West Bank through its financial support for armed groups there, Hamas claims it is committed to preserving the truce in Gaza, in exchange for the economic incentives provided by Israel in a bid to rebuild its military capabilities following the so-called Sword of Jerusalem Battle in May 2021.

On Aug. 9, Israel demanded, via UN Special Coordinator for the Middle East Peace Process Tor Wennesland, that Hamas refrain from joining the battle alongside the Islamic Jihad back then, and that in return it would not attack any Hamas target.

Mustafa al-Sawaf, a political analyst close to Hamas, told Al-Monitor, “Any act of resistance through rockets fired from Gaza toward the Zionist occupation that does not enjoy consensus within the joint Palestinian operations room harms the Palestinian domestic front.”

Talal Okal, a political writer for the Palestinian al-Ayyam newspaper, told Al-Monitor, “There is a Hamas decision, which all factions abides by, to continue to work based on the equation of security calm in exchange for incentives. But some circumstances — in reference to Israel’s threats to assassinate resistance leaders in Gaza on charges of supporting the resistance in the West Bank — may push the resistance to violate this rule at any time and to engage in acts of resistance against the Israeli occupation.”

He added, “Israel cannot indefinitely preserve the rule of calm in exchange for incentives in Gaza, because Benjamin Netanyahu’s ambitions regarding security sovereignty over the West Bank and the annexation of Area C will push the resistance in Gaza to respond to Israel. Thus, a major escalation that would involve all Palestinian factions is highly likely in the Palestinian territories.”