Religious Zionism politician Itamar Ben Gvir has been linked to the late American-Israeli firebrand Meir Kahane, who called for the expulsion of Arabs from Israel. 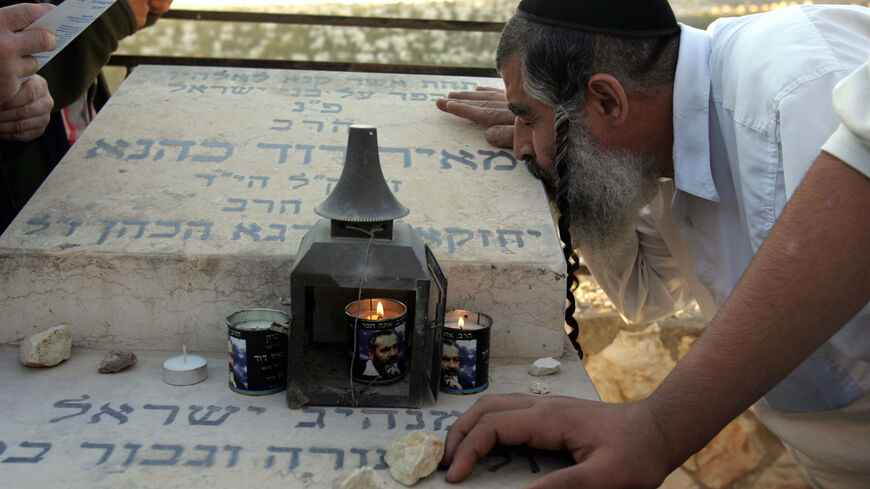 A follower of the late Brooklyn-born Rabbi Meir Kahane (image on candle) prays at his grave in the Givat Shaul cemetery on the outskirts of Jerusalem Nov. 9, 2006, to mark the 16th anniversary of his assassination in Manhattan. - MENAHEM KAHANA/AFP via Getty Images

With most of the votes counted, it appears former Israeli Prime Minister Benjamin Netanyahu will soon return to power in Israel. Netanyahu’s Likud was in first place with 32 seats after more than 87% of the ballots were counted from this week’s election, followed by current Prime Minister Yair Lapid’s Yesh Atid and Religious Zionism

Ben Gvir, a lawyer, used to defend radical right-wing Jews in court, and has himself been indicted for inciting violence. He and Jewish Power are sometimes linked to the ideology of Kahanism, named after late American-Israeli Rabbi Meir Kahane. Kahanism has long been polarizing in Israel for its views on Arabs and Palestinians and the corresponding Kach party is outlawed. So what is Kahanism and what do its adherents believe?

Kahane was born in Brooklyn, New York, into an Orthodox Jewish family. He became a rabbi and was a proponent of Zionism from a young age. In 1968, he founded the Jewish Defense League, which to this day serves to protect Jews against antisemitism. The organization was known for criticizing the Soviet Union’s restrictions on Jewish emigration in its early days, but was later associated with violence, such as a 2001 plot to bomb the office of Palestinian-American Congressman Darrell Issa.

Kahane immigrated to Israel in 1971 and founded the Kach party. Kahane and the eponymous ideology went well beyond mainstream Zionism and actually called for expelling all Arabs from Israel and the Palestinian territories.

Kahane’s plan was for Arabs to hear his message and accept being resettled outside of Israel for compensation. “Any Arab willing to leave will get full compensation for his property, which is more than they gave Jews leaving Egypt and Iraq,” Kahane told a crowd of supporters in 1984, referring to the Jewish exodus from Arab countries.

He also called for retaliatory violence against Arabs in response to attacks on Jews in Israel.

Kahane’s Kach party picked up a seat in the Knesset in 1984, but was outlawed by 1994 under Israel’s anti-terrorism laws.

Some Kahanists have been associated with violence. The most notorious incident took place in 1994, when American-Israeli Kach supporter Baruch Goldstein shot dead 29 Palestinians in the Cave of the Patriarchs, also known as the Ibrahimi Mosque, in the West Bank. The incident was widely condemned in Israel and the American Jewish community.

Kahane himself was assassinated in 1990 by El Sayyid Nosair, an Egyptian who immigrated to the United States. Nosair was also later convicted in relation to the 1993 World Trade Center bombing.

Ben Gvir and Jewish Power have been frequently linked to Kahane in the Israeli press. There are similarities, and Ben Gvir was once a member of Kach. Ben Gvir has called for expelling “disloyal” Arabs from the country, though it is unclear how this determination would be made. He also infamously used to have a photo of Goldstein in his living room.

Ben Gvir himself addressed his views on Kahane in an interview last year. The politician praised Kahane, but said he does not “generalize” about Arabs in the same way.

“I think Rabbi Kahane was a holy man, a righteous man, who fought for the Jewish people,” he said. “But after all that, no, I’m not Rabbi Kahane word for word…I don’t support generalizing about the Arabs.”

Kahane’s views on Arab and Palestinian Israelis are still present elsewhere on the Israeli right. Earlier this year, a parliamentarian from the rival right-wing party Yamina said he wished “all Arabs would go on a train to Switzerland.” He later apologized.

Merchandise reading “Kahane was right” in Hebrew is not uncommon among far-right Jewish Israelis.

Why it matters: Ben Gvir’s likely inclusion as a minister in a Netanyahu government will affect relations with the United States. Israeli journalist Barak Ravid reported today that the Biden administration would not work with Ben Gvir, citing two US officials.

The United States removed the inactive Kach from its list of foreign terrorist organizations in May.

The next Israeli government is shaping up to look quite different from the current one, which included an Arab political party for the first time ever.

Lapid supports the creation of a Palestinian state, unlike Netanyahu and Ben Gvir, though negotiations with the Palestinians remain dormant.

Know more: Al-Monitor is hosting a webinar with veteran Israeli journalist Ben Caspit Thursday on the implications of the Israeli election.