As the dust settles from airstrikes on Kurdish militants in Syria and Iraq, Turkey is threatening a wider operation in the region. 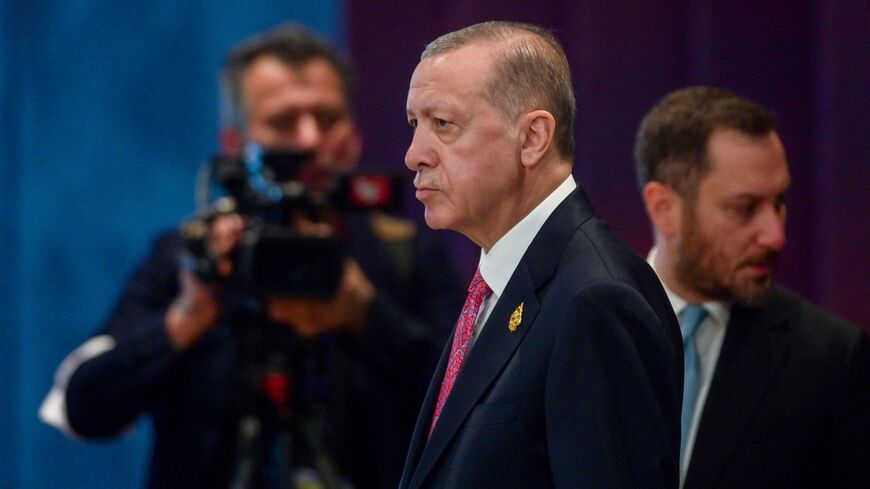 Turkey's President Recep Tayyip Erdogan arrives for the opening of the G20 Summit in Nusa Dua on the Indonesian resort island of Bali on Nov. 15, 2022. - BAY ISMOYO/AFP via Getty Images

ISTANBUL — For months Turkish President Recep Tayyip Erdogan has promised to “come suddenly in the night” for Kurdish militants on Turkey’s southern border. On Saturday night, scores of F-16 fighter jets and drones did exactly that.

The air operation, "Claw-Sword," was ostensibly launched in response to the Nov. 13 bomb attack on Istanbul’s Istiklal Street that killed six people and wounded over 80 others.

Presidential spokesperson Ibrahim Kalin drew a direct link between the blast and the airstrikes, tweeting a photograph of the Turkish flag with the comment, “Payback time for Istiklal.” Turkish air force ground crews wrote the names of two children killed in the atrocity on bombs to be dropped.

The air raids, which set off from bases in southern Turkey just before midnight Saturday, targeted Kurdish militants in Syria and Iraq that Ankara has identified as responsible for the Istanbul attack — the outlawed Kurdistan Workers Party (PKK) and the Syrian People’s Protection Units (YPG). Both groups have denied involvement.

Turkey and most Western countries consider the PKK a terror group but disagree on the status of the YPG. The PKK has fought an armed insurgency in Turkey since 1984 in which tens of thousands of people have died. Under the banner of the Syrian Democratic Forces, the YPG has been allied with the United States in the fight against the Islamic State group in Syria.

The airstrikes were some of the most widespread launched against Kurdish militants, with 89 targets hit along a 730 kilometer (453 mile) front between Tall Rifat in northwest Syria and the Asos mountain region on Iraq’s eastern border with Iran. Asos is some 100 kilometers (86 miles) south of the Turkish frontier.

The YPG reacted to the strikes by launching rockets across the Turkish border from Syria. A soldier and seven police officers were injured at the Oncupinar border gate in Kilis province on Sunday. Interior Minister Suleyman Soylu said three people including a child were killed and at least six wounded in Gaziantep’s Kalkamis district on Monday. Turkish forces responded by shelling targets in Syria.

Talking to journalists on his return flight Monday from the World Cup opening ceremony in Qatar, Erdogan suggested the offensive will be widened into a ground operation.

“It is not possible for this to be limited to an air campaign,” he said. “Our relevant organs, the Ministry of Defense and the General Staff, decide together how much of a force from the land forces should participate in this. We do our consultation and then we take our steps accordingly.”

Turkish troops are already deployed in northern Iraq, where Operation Claw-Lock against the PKK took place in April. Ankara has launched three major cross-border operations into Syria since 2016 and already controls some territories in the north.

Unal Atabay, a counter-terrorism analyst and a retired army staff colonel, described the operation as a defining moment in Turkey’s security policy.

“There has never been a simultaneous air force operation on such a wide front,” he told the opposition Cumhuriyet newspaper. “It is an important message given to the world and the countries in the region.”

He went on, “Technically, it was a difficult operation. If this is an operation carried out within the scope of the political directive, it is a preparatory attack for a subsequent ground operation.”

Erdogan criticized Russia, which controls the airspace over much of northern Syria, for not delivering on a 2019 promise to clear the region of “terrorists.”

“We said that we would not remain silent," Erdogan said, "and that if they could not do it themselves, we would take steps against the terrorists there.”

Turning his ire to the United States, he criticized its arming of the YPG since Barack Obama’s presidency, saying, “I’ve shared [our concern] with Mr. Obama, I’ve shared it with Mr. Trump, I’ve shared it with Mr. Biden," and "Since such a threat comes to us from the south, you are putting us in trouble by giving this support to the terrorist organizations here. We cannot live with these problems. We will have to respond to them if necessary.”

Erdogan said he had not discussed the airstrikes with either US President Joe Biden or Russia’s Vladimir Putin ahead of the operation.

“Both Mr. Biden and Mr. Putin know that we can do such things in this region at any time,” he said. “As in this case, we always say that we can come suddenly one night. In the coming period, I hope they will all see how we will and need to take much more important steps decisively.”

There was little international reaction in the aftermath of the airstrikes but in Turkey, the Democratic People's Party (HDP), which has roots in the Kurdish movement, condemned the operation.

“We may never really learn about the forces behind the Istanbul bomb attack and their purpose, but one thing is very clear: The Turkish government has been using this attack as a pretext to legitimize and further its aggression against the Kurds in Syria,” the party’s foreign affairs spokespeople said in a statement.

Linking the operation to elections due next year, they said the attacks “serve the purpose of boosting Erdogan's electoral chances by uniting voters around a “nationalist and anti-Kurdish agenda.”