Murder has gone up by 18% this year in Lebanon, but perhaps an even more insidious danger is a rise in mental distress and suicide. 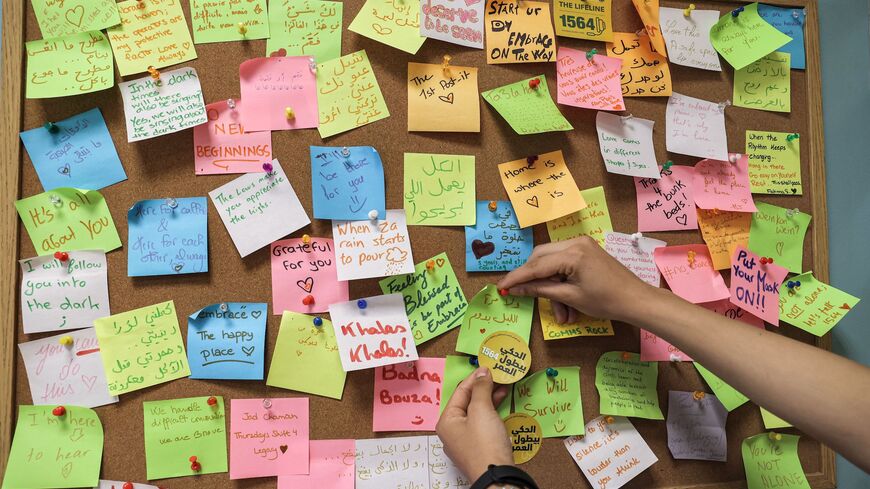 A woman places a note on a post-it board at the offices of Embrace, which runs a suicide-prevention hotline, in Lebanon's capital Beirut on Sept. 1, 2021. - ANWAR AMRO/AFP via Getty Images

For the past couple of months, Jeff Jabbour hasn’t been feeling safe in the streets of Beirut. There is less light at night and rumors about violence and robberies. The young doctor, as many other Lebanese, can sense the desperation of people in public spaces.

“This increase of the feeling of insecurity is because of the crisis that we are living in,” he told Al-Monitor. New data by the research center Information International confirms his sense: There has been an 18% rise in murder cases and suicides gave gone up by 7.8% compared with the same period last year.

The study, which is based on reports from the General Directorate of the Internal Security Forces, includes reports of violent crime in Lebanon such as fratricide, assassination, rival familial and personal disputes, along with clashes between the army and crime suspects, traffickers and gangs.

The economic crisis has contributed to a state of social unrest and general desperation that may explain this violent response.

Almost three quarters of the Lebanese population are living in poverty, according to the United Nations.

Sevana Topalian is a crisis hotline supervisor at Embrace, a Lebanese nongovernmental organization that works in mental health. “It is not a surprise that the crime rates are increasing because people have to do everything to survive,” she told Al-Monitor.

Lebanon has been rated the angriest country in the world by Gallup, which surveyed over 100 countries for its Global Emotions Report. Nearly half of respondents in Lebanon reported experiencing anger regularly, including on the day before they took part in the survey. The Mediterranean country is also one of the saddest and most stressed.

“The current economic situation is a daily stressor that you know is never going to go away,” said Topalian from Embrace’s offices in Beirut. “In the streets, you can observe these behaviors as people being more sensitive to everything,” she added.

One of the most affected groups by the increasing violence is women. The rise of aggression towards them, specially in the household, and the lack of a public response to violence against women condemns them to daily uncertainty. Many organizations such as Kafa and Abaad have been raising awareness and aiding these women.

Kafa researcher Fatima el Hage told Al-Monitor, “There’s an increase in the incidents and in violence against women, especially since the COVID-19 lockdowns.” Many of these women were forced to live for months under the same roof with their aggressors.

The deterioration of the economic situation has aggravated the problem. “A lot of women return to the households where they are subjected to violence because they don’t have an alternative to survive. In some cases, this dependence can result in killings,” el Hage explained.

Lebanon has been facing compounded crises after the 2019 protests, the pandemic and the Beirut port blast in August 2020.

“Women are the ones who are most left behind and the authorities do not really care about them,” el Hage told Al-Monitor. “A lot of women who are under threat are coming to us for help but since the judges are not punishing their aggressors, they are retracting their accusations and staying with them,” she said. “There is a lot of social acceptance of violence against women and against children,” she concluded.

This critical economic and social situation is pushing more people toward suicide. Topalian explained that the stress of the social and economic crisis plus underlying psychological distress can push a person to contemplate or commit suicide.

Jabbour has been noticing more suicidal thoughts among his friends and colleagues. “Everyone you talk to" is taking medications to take care of their mental health, he told Al-Monitor. “We are in a national mental health crisis and we are all being affected by it,” he added.

Every 2.1 days, a life is lost to suicide in Lebanon, according to Embrace, which found that in the first seven months of 2022, there were 83 cases of suicide, compared to 72 in the same period during 2021. One person attempts suicide every six hours. But this data cannot fully capture the crisis. Topalian explained, “Some suicide might not be reported due to stigma, taboo or religious issues.”