Clashes erupted between Hayat Tahrir al-Sham and Faylaq al-Sham, affiliated with the Turkish-backed FSA, due to differences over the alleged opening of a commercial crossing with the Syrian government-held areas in the eastern Idlib countryside. 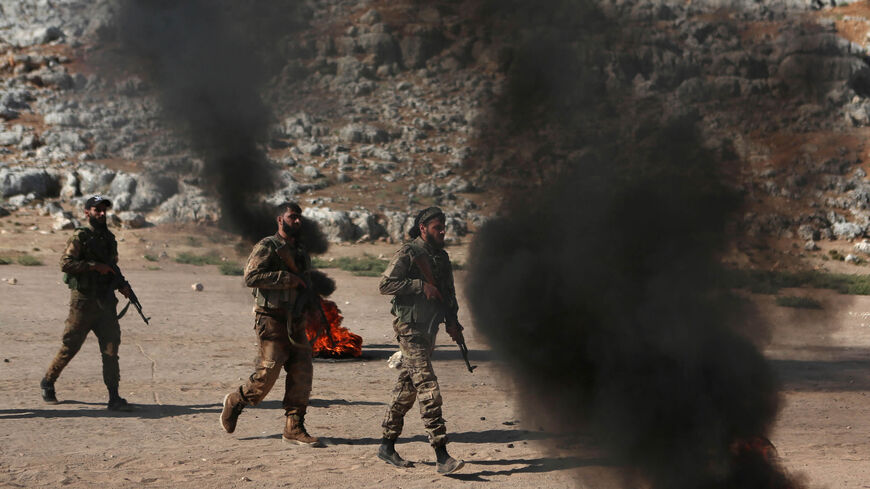 Members of Hayat Tahrir al-Sham attend a graduation for a new batch of fighters in the countryside near the rebel-held northwestern city of Idlib, Syria, Sept. 13, 2022. - Aaref Watad/AFP via Getty Images

The violence broke out after HTS attempted to expel members of Faylaq al-Sham (Sham Legion), who were present at a military post separating the areas of the Syrian government and the opposition.

An officer of the FSA-affiliated Syrian National Army who is based in Idlib told Al-Monitor on condition of anonymity, “HTS dispatched military convoys and besieged a military post for Faylaq al-Sham, near the demarcation lines with the Syrian regime, and asked its members to surrender themselves and their weapons. Clashes then erupted between HTS forces and Faylaq al-Sham fighters who refused to leave their posts.”

The officer said HTS’ move came as part of its plan to open a commercial crossing with the government areas to make financial gains. “HTS fears that Faylaq al-Sham would obstruct this plan. It seeks to show that it has a security and military grip over Idlib entirely,” he added.

Mohammed al-Omar, an Idlib-based journalist close to HTS, told Al-Monitor, “Al-Fatah al-Mubin operations room, which includes HTS and the FSA factions, including Faylaq al-Sham, has been working for the past three months on restructuring the points of contact between the regime forces and HTS’ stronghold. The operations room has dug trenches and tunnels, and opened new posts as part of this restructuring process.”

He said, “All parties are well aware that HTS’ posts are the most fortified while Faylaq al-Sham’s are the least fortified and that its members are incompetent. When the officer in charge of the restructuring process entered Faylaq al-Sham’s posts, he found some members playing the PUBG video game while on duty, which prompted the decision to replace them. However, when Faylaq al-Sham refused to leave, clashes erupted briefly, before they were resolved.”

Omar denied the claims that HTS seeks to open a commercial crossing with the Syrian government.

Mohannad Darwish, an Idlib-based journalist, told Al-Monitor, “Faylaq al-Sham has adopted a policy of zero problems, which is why it avoided any clashes with HTS in the past years. It is the only one that did not fight with HTS, and it seems the recent violence was an exception."

He said, “HTS intends to open a crossing with the Syrian regime to allow trade exchanges between its Salvation Government and the regime to make financial gains. I don’t think that HTS wants to expel Faylaq al-Sham from Idlib, but it will certainly not allow it to not follow the general policy it developed for the area.”

He noted, “Faylaq al-Sham is a strong ally of Turkey, and at the same time HTS needs such a faction in Idlib to serve as a link with the Turks on the one hand, and to bear military burdens on the other, because Faylaq al-Sham obtains Turkish military support. Also, very large parts of the fronts in Idlib are under the control of Faylaq al-Sham and its fighters are deployed there.”

It seems HTS is adopting the carrot and stick policy when it comes to dealing with Faylaq al-Sham, since it needs its presence while at the same time fearing it. At times, HTS gets tough with Faylaq al-Sham while at other times, it goes easy on it because the faction serves as a channel of communication for HTS with Turkey and Qatar.