In his efforts to win the Nov. 1 elections, opposition head Benjamin Netanyahu is willing to torpedo the American-mediated agreement between Israel and Lebanon on maritime border demarcation and to attack the Biden administration. 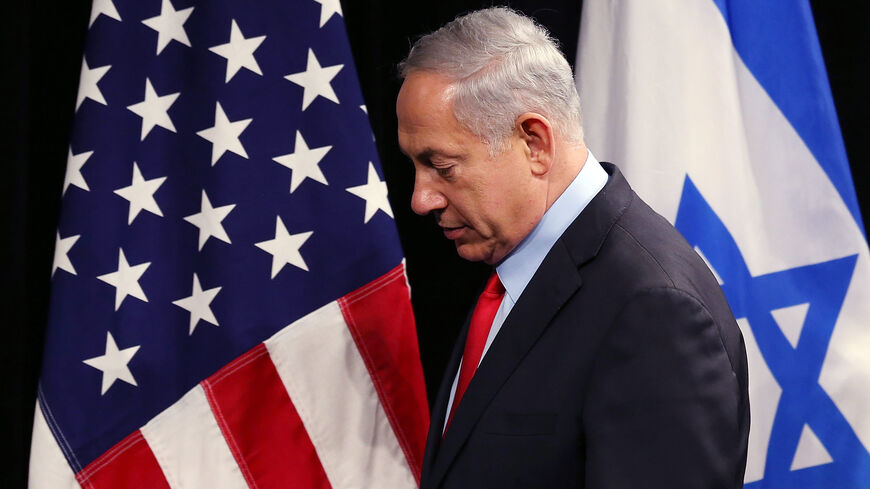 Less than a month before the most crucial elections of his life, Israel’s former Prime Minister Benjamin Netanyahu appears to be going off the deep end as he accelerates his comeback bid. The latest manifestation of his seeming loss of control was a broadside he directed at the Biden administration.

With US-mediated negotiations over the Israel-Lebanon economic waters dispute apparently nearing resolution, Netanyahu is accusing his rival, caretaker Prime Minister Yair Lapid, of surrendering to Hezbollah Secretary-General Hassan Nasrallah and of holding a closeout sale of Israel’s natural gas reservoirs to the group.

At the same time, through various leaks and anonymous sources, Netanyahu’s associates have accused the United States of meddling in Israel’s internal affairs and crass interference in Israel’s elections.

In other words, Netanyahu and his associates are trying to court public opinion by inciting against Israel’s greatest ally, the US administration.

Netanyahu did so in the past during President Barack Obama’s term, in efforts to torpedo the nuclear agreement with Iran. He is now going for a second round under another Democratic president, Joe Biden, whose envoy Amos Hochstein is the lynchpin of attempts to settle the long-running Israel-Lebanon dispute.

Netanyahu’s ire is directed at what he describes as US pressure on Israel to accept a deal with Lebanon. He is also furious at recent signals from unnamed senior US officials questioning the validity of his promise to appoint radical right-wing lawmaker Itamar Ben Gvir as a minister in his next government.

The natural gas issue is the most relevant at the moment, with Netanyahu announcing Oct. 2 that he would not be bound by any agreement and aides claiming such a crucial decision by a caretaker government would be invalid.

In that respect, Netanyahu’s attempts to drag the Biden administration into Israel’s election cauldron, as first reported by Israeli public broadcaster Kan, seems to be especially offensive.

“The former prime minister is causing Israel strategic damage,” a senior Israeli security source told Al-Monitor on condition of anonymity. “He knows the Israel-Lebanon agreement is important, he knows that all the security experts, bar none, support it, he knows Israel is conceding very little in return for regional stability and security for its Karish gas reservoir [adjacent to the border with Lebanon]. He knows all of the above, and is nonetheless looking for a fight, issuing threats and willing to do anything to undermine a deal.”

Netanyahu’s attempts to taint Lapid as a traitor selling out Israel’s natural resources to Nasrallah is evidently baseless. Several security experts have explained in recent days that Israel did, indeed, agree on a demarcation line that is closer to Lebanon’s interpretation of the extent of its economic waters than to its own, but did so out of clearcut security and economic considerations of cost effectiveness.

Israel’s concession to Lebanon of a small gas reservoir that has yet to be officially discovered is minor compared to the benefits such an agreement provides, the experts say. By agreeing to Lebanese gas drilling so close to its own Karish field, and other potential natural gas reservoirs, Israel is minimizing the threat from Hezbollah or other hostile elements.

What's more, as pointed out to Al-Monitor by a former senior intelligence source who spoke on condition of anonymity, Lebanon is currently dependent on illegal Iranian oil supplies, which greatly enhance Iran’s influence over the country and Nasrallah’s power. “Once Lebanon achieves a form of energy independence, it would invariably diminish Iran’s influence and dependence on Nasrallah. This is a clearcut Israeli interest,” the source said.

Netanyahu is a skilled, energetic, creative, sweeping campaigner. At the same time, history shows that he lacks inhibitions, and is willing to go to any length to win.

When Netanyahu tells Israeli voters that Lapid has sold Nasrallah sovereign Israeli territory, he is not being truthful because economic waters are not sovereign territory under international law; they only grant a state exclusive rights to the use of maritime resources in these waters. In international law, they are called exclusive economic zones.

Netanyahu also knows that Lapid did not “surrender” to Nasrallah. In fact, the Hezbollah leader refused to accept any deal with Israel for seven years until circumstances forced him to agree.

Weighty international interests are also at play. The US administration has invested great efforts in the mediation. Hochstein has traveled to the region countless times, plowing on until circumstances were ripe for a deal. Biden is motivated by a supreme interest in expanding the world’s gas supplies, or at least their potential, in order to allay European concerns ahead of a tough winter without Russian gas. While a deal with Lebanon will not provide immediate energy, it would go a long way to calming tensions and signaling potential change in the foreseeable future.

Netanyahu, it seems, is unmoved by these considerations. A once pragmatic leader well versed in geopolitics, Netanyahu now focuses on creating chaos. Over the past three years, he has taken on the Israeli Police, state prosecution, attorney general, courts and judges, elites and political left. His many followers are mounting a noisy campaign that tags the dwindling camp of Israeli leftists as traitors. Whereas Netanyahu would once try to calm the waters and signal ease, he is now adding fuel to the fire through his tentacles in social media and agents spread across quite a few media outlets.

Ahead of Nov. 1, tensions are rising, as are incidents of violence, which risk further escalation. Defense Minister Benny Gantz, a leading contender for the premiership, has dubbed the upcoming voting the “November nightmare.” Let's hope his hyperbole does not prove prophetic.