President Joe Biden called on Lebanon and Israel to now implement the agreement over their long-disputed maritime border. 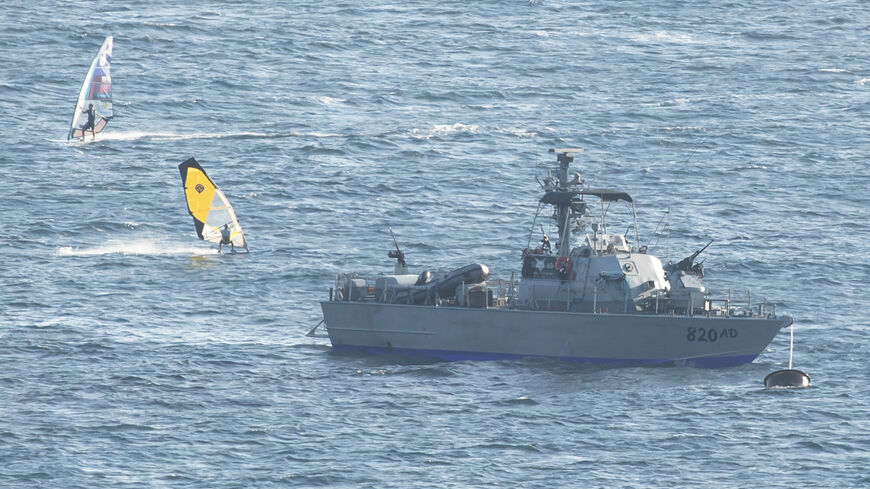 Windsurfers surf by an Israeli navy boat in the Mediterranean Sea at the Israeli side of the border with Lebanon on Oct. 11, 2022, in Rosh Hanikra, Israel. The agreement should resolve a territorial dispute in the eastern Mediterranean Sea, where Lebanon wants to explore for natural gas. Israel is already extracting natural gas from nearby fields. - Amir Levy/Getty Images

The Biden administration hailed the US-mediated maritime deal reached between Lebanon and Israel on Tuesday as a “historic breakthrough” for two neighboring countries that remain technically at war.

The new agreement establishes a permanent maritime boundary between Israel and Lebanon, resolving a longstanding territorial dispute over a potentially gas-rich 330-square-mile stretch of the eastern Mediterranean Sea.

“This agreement is historic for a number of reasons,” said a senior administration official briefing reporters on Tuesday. “It provides security and safety for Israel. It provides economic opportunity and hope for Lebanon.”

The official framed the agreement as a potential economic lifeboat for Lebanon, which is suffering its worst financial crisis in decades. The small Mediterranean country's currency has lost more than 90% of its value since 2019, and the state electricity company is unable to provide residents with more than a couple hours of electricity per day.

The agreement “will over time improve the energy conditions in the country and perhaps have an immediate response to the electricity crisis long before these fields are discovered and developed,” the official said, speaking on condition of anonymity.

The deal also paves the way for increased Israeli gas exports to energy-starved Europe. The administration official speaking to reporters touted Israel’s “ability to export and be part of the solution for the global and European crisis” in the wake of Russia’s invasion of Ukraine.

The maritime accord delivers a foreign win to President Joe Biden, who last year tapped senior US energy envoy Amos Hochstein to oversee the stalled Israeli-Lebanese negotiations after previous administrations failed to secure a deal.

Biden held separate phone calls on Tuesday congratulating Israeli Prime Minister Yair Lapid and Lebanon’s President Michel Aoun. He called on both parties to “uphold their commitments and work toward implementation,” according to a White House statement.

"The agreement announced by both governments today will provide for the development of energy fields for the benefit of both countries, setting the stage for a more stable and prosperous region, and harnessing vital new energy resources for the world," Biden said.

The Lebanese and Israeli leaders each expressed their support for the agreement. Aoun said the final offer was satisfactory to Lebanon, “meets its demands and preserves its rights to its natural resources,” while Lapid called it a “historic achievement” that will “strengthen Israel’s security, inject billions into Israel’s economy and ensure the stability of our northern border.”

To move forward with the deal, both Beirut and Jerusalem still require approval from their governments. The senior administration official said Washington expects the agreements to be signed and put into force as soon as possible but acknowledged it’s not yet a done deal.

“This has not been an easy negotiation,” said the administration official. “We expect that there may be other difficult moments as we implement this agreement moving forward.”

The maritime agreement comes as Israel gears up for its fifth election in four years. If elected, former Prime Minister Benjamin Netanyahu has said he won’t be bound by the agreement, which he accused of benefiting Hezbollah.

“Anyone who looks at this from a nonpolitical, nonpartisan, but from a substantive perspective, will reach the inescapable conclusion that both countries here have done very well,” the official said when asked about Netanyahu's criticism.

Experts say the deal could help ease tensions between Israel and Hezbollah, the Iran-backed Shiite group that fought a monthlong war with Israel in 2006.

Hezbollah had threatened to attack Israel if it explored for gas in the disputed area before a deal was reached. In July, Israel said it intercepted three Hezbollah drones flying over its Karish rig in the Mediterranean.

The militant group, which was not included in the US-led negotiations, did not immediately comment on the agreement Tuesday. Officials told Reuters, however, that Hezbollah had agreed to the deal’s terms.