More public and private institutions in the socially conservative Gaza Strip are being served by women security guards. 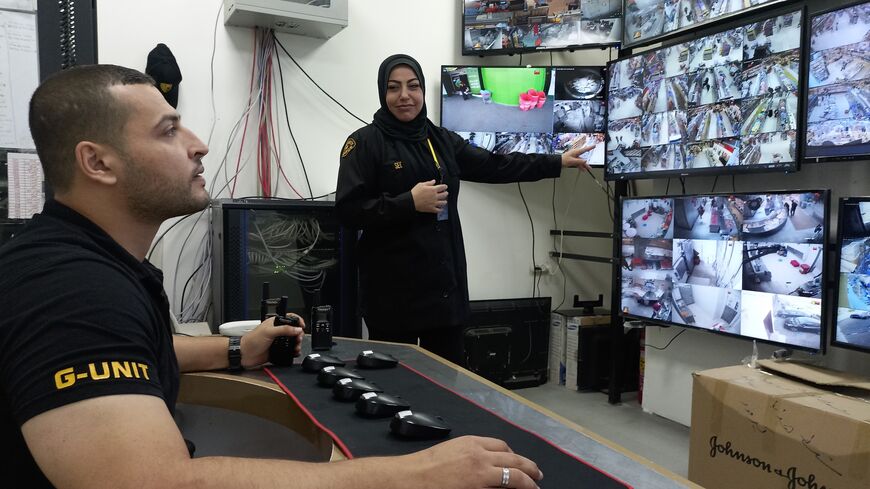 Reem Sukkar, who works at the Carrefour Mall in Gaza City, is one of the Gaza Strip's first women security guards.

“My dream is to open a women-only security company in the Gaza Strip,” Sukkar told Al-Monitor.

“My husband works in security and he had many books on security work that I was constantly reading. I love crime mysteries and everything related to security. I was once at my bank and I saw a woman arguing with a male security guard. He could not resolve the issue because she was a woman and he could not touch her because we live in a conservative Islamic society. That was in 2015, and that is when I got the idea to study security sciences at a college in Gaza,” she said.

More women in Gaza are taking up professions that were once monopolized by men. Several internationally funded projects have encouraged the inclusion of women in the Gaza workforce. Rapid population growth has brought both challenges and opportunities, and some institutions are now requesting female security staff to meet growing needs.

Sukkar said, “I underwent intensive training courses for three months. My first training was with the Ministry of Interior. It consisted of several courses, including self-defense and communicating with the public " as well as more advanced subjects such as weapons and conflict resolution. "I then had some training with the security company I work with, G-Unit. It included refresher courses for everything that I had studied at university. I have been working as a security guard for six years in banks, private companies and large malls.”

She added, “Many people, especially men, have criticized me for working as a security guard. Whenever an issue arises between two men, they ask for a male guard to resolve it instead of me." Nevertheless, she said, she remained determined with the support of her community.

There are three private security companies in Gaza — Secure Land, G-Unit and Royal Security. These companies are all licensed by the Ministry of Interior in Gaza. They train and deploy security guards at banks, malls and markets.

Iman Abu Hamad is another female security guard. She did not specialize in security sciences like Sukkar, but she loves her job. She told Al-Monitor, “I graduated from university majoring in Arabic, but there aren’t many job opportunities in my field. I saw an ad that Security Land was looking for female guards. So I checked it out and it turned out I needed to undergo a 45-day intensive training with the Ministry of Interior. At first I was afraid, but there were no other opportunities. The training was very intense and included physical fitness, explosives and a lot more.”

She added, “After I finished my training and started working, I realized how much power and courage it gave me. I started encouraging other women to join. Many situations require assistance from female staff. I have worked as a security guard at banks, weddings and other events, exhibitions and shops such as LC Waikiki. I had to defuse many tense situations but they have only made me stronger, and I love being financially independent.”

Abu Hamad explained, “The most difficult thing is having to deal with men in our closed and conservative society. Many have criticized my work or looked at me strangely. I always get asked why I work in security as a woman. I never let this affect me. I love my work and my family and company support me.”

Bilal al-Arabid, director of Security Land, told Al-Monitor, “We were the first company in the Gaza Strip to hire female guards. In 2015, we felt that there was a need to open this labor market to women and we established a training program. The trainers are mostly retired officers and have experience in security and military training.”

He added, “We then started posting job vacancies and many women applied. Although many clients needed security guards, we had some trouble convincing them that hiring female guards was a great idea, given the conservative society we live in.”

Hani al-Najjar, director of G-Unit, told Al-Monitor, “Thanks to modernization, our culture is beginning to change. Consequently, there is a growing demand for female security guards in malls, banks, and institutions." He said the company opened job applications to women and had over 500 apply.

He added, “Our employees undergo intensive training to work in security. Having female guards to deal with women and children is crucial because men find it difficult to defuse situations in which women are involved.”