Israel and Jordan are creating a plan to rehabilitate and protect the Jordan River, making it a year-round water source with a healthy ecosystem. 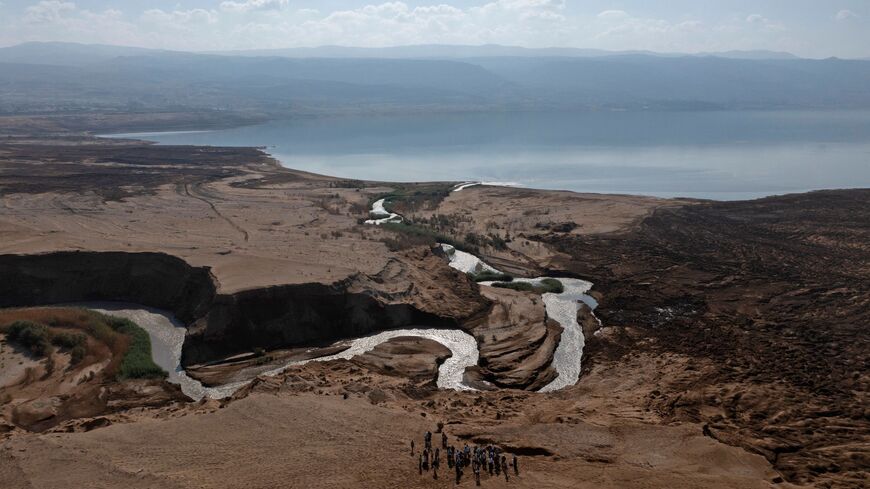 A group of Israeli hikers walk on the hills near the Jordan River where the stream pours into the Dead Sea near the West Bank city of Jericho on Oct. 14, 2022. - MENAHEM KAHANA/AFP via Getty Images

Today, Israel and Jordan mark 28 years since the 1994 signing of their peace treaty. Bilateral relations have gone through many ups and downs over the years, but it seems that both governments agree on one issue in particular: the necessity of cleaning up and rehabilitating the Jordan River.

Due to long years of neglect along its southern section, combined with degradation caused by years of drought and sewage discharge, the river’s southern basin has become a putrid waterway with only a trickle of water for the Christian pilgrims who seek to perform baptism rites in its waters.

In July 2022, Israel’s government approved a long-awaited interministerial cleanup project. Its initial phase aims to restore the first seven miles of the river's southern basin, including treating and monitoring and sewage as well as injecting additional water into the dying waterway.

The plan calls for a significant increase of water flowing into the Jordan River from the Sea of Galilee through a small opening alongside the Degania Dam, from 11 million cubic meters of water per year to 40 million. The increase will be made possible in part by a significant reduction in the amount of water pumped from the Sea of Galilee through the national water carrier network to other parts of the country. That reduction is made possible by the growing portion of Israel’s drinking water being provided by desalination plants along Israel’s Mediterranean coast.

The government resolution states that the restoration project is intended to turn the river into a year-round water source with a healthy ecosystem by preserving its rich biological diversity and developing it as a tourism and community attraction. It is also designed to enhance cooperation with Jordan, creating together a sequence of open spaces along its route. These open spaces are to include protected nature zones, sustainable agriculture and infrastructure for public use, thus assisting the region in dealing with climate change.

Under the plan, Israel’s Agriculture Ministry and Regional Cooperation Ministry will promote meetings between Israeli and Jordanian farmers from both sides of the river to deepen cooperation on environmental and agricultural issues. An interministerial team will be formed to examine additional cooperation along the southern Jordan River Basin in preservation and development as well as prevention and mitigation of damage from climate change.

Cooperation between the communities living on both sides of the river will include economic aspects and knowledge transfer on tourism development and other matters. Israel's Regional Cooperation Ministry, in cooperation with Jordanian authorities, is set to prepare a detailed infrastructure development plan for a conference and research center dedicated to river restoration and preservation in arid climates.