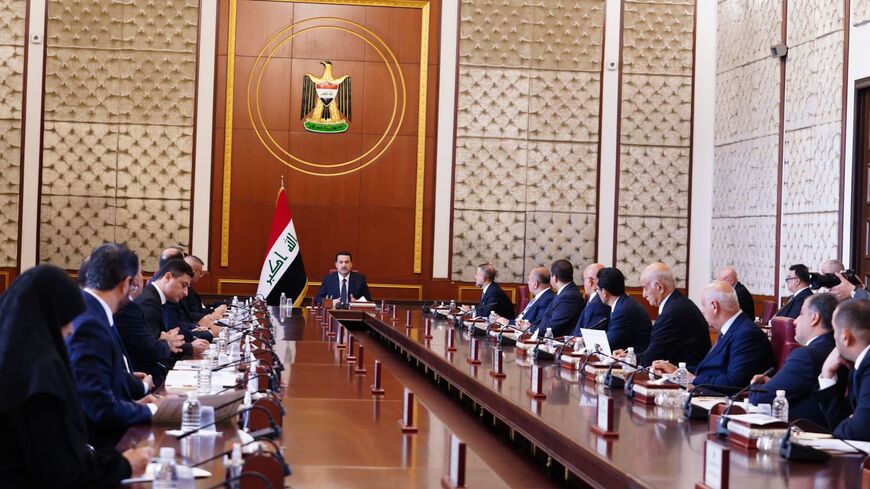 The new premier officially assumed his duties as prime minister and commander-in-chief of the armed forces in a handover ceremony with former Prime Minister Mustafa al-Kadhimi at the Government Palace.

The new government immediately held its first cabinet meeting on ministerial handovers, during which the prime minister stressed the need to “avoid making hasty decisions" and "changes and modifications," warning against "marginalization and exclusion." He noted that "all those present are employees of the Iraqi state."

The ministries are shared among Iraq's political parties based on sectarian quota system.

Of a total of 23 ministries traditionally represented in the cabinet, 21 ministers have been selected. The other two — the Ministry of Environment and the Ministry of Construction, Housing, Municipalities and Public Works — remain vacant due to lack of agreement among the political parties.

The Shiite ministries are shared among the Shiite political parties within the Coordination Framework:

The Sunni ministries are shared between the Taqaddum Party and Azm Alliance:

The Kurdish ministries are shared between the Kurdistan Democratic Party and Patriotic Union of Kurdistan:

The minority parties' share went to the Babylon Movement, led by Ryan al-Kildani

The Sadrist Movement is the only main political party to refuse to participate in the government. The Sadrists, led by Shiite cleric Muqtada al-Sadr, won the largest number of seats in parliament in last year's elections but they withdrew from the legislature in June after failing to form a new government. Then the Coordination Framework replaced their seats and became the largest bloc.

This is first time the Sadrists have not participated in the government. Previously, the Shiite share was divided equally among the Sadrists and other Shiite parties that are gathered today under the umbrella of the Coordination Framework.

None of the about 40 independent legislators received cabinet positions.

In his plan that was approved yesterday, Sudani promised to hold new elections within one year, offering the Sadrists and others another chance to join.