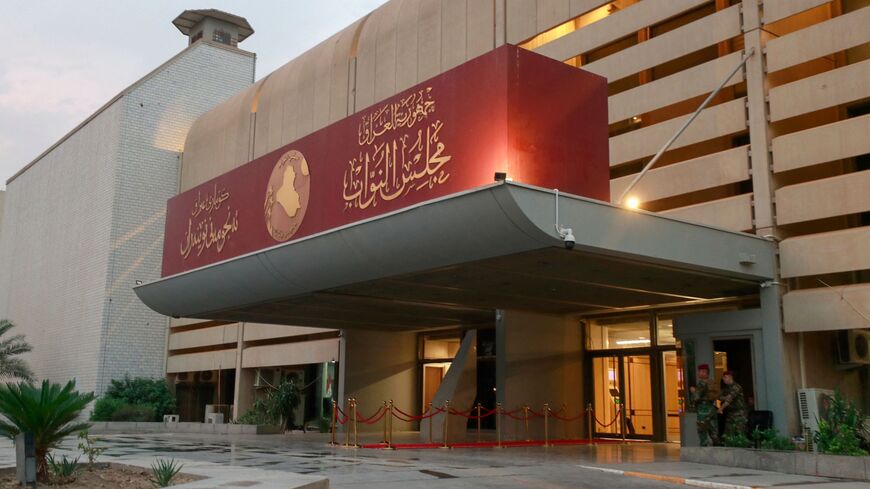 A picture shows a view of the Iraqi parliament in Baghdad, ahead of a confidence vote on a new government on Oct. 27, 2022. - AHMAD AL-RUBAYE/AFP via Getty Images

BAGHDAD — The Iraqi parliament approved the new government of Mohammed Shia al-Sudani on Oct. 27, as the 29-page ministerial program put forth by Sudani was put to a vote and received more than 250 of 329 parliamentarians' votes.

Sudani presented his approach as far as the work of ministries is concerned and did not introduce any major change in the general policies drawn by the ministerial program of his predecessor, Mustafa al-Kadhimi. This is despite the fact that over the past couple of months, Sudani harshly criticized Kadhimi and his political team over policies related to foreign relations and regional and international cooperation, among other issues.

Sudani has a strong card enabling him to roll out his program — namely, the broad parliamentary cover that his government enjoys, as it is the fruit of the “state administration coalition” formed by the Coordination Framework, which is a political alliance between Shiite groups and military parties loyal to Iran with about 140 parliamentary seats.

However, it eventually adopted the quota approach among the participating parties, which could end up blocking any major initiatives.

The most important point in Sudani’s ministerial program is the emphasis on holding early elections within a year and the amendment of the Parliamentary Elections Law within three months, thereby conveying a positive message to the leader of the Sadrist movement, Shiite cleric Muqtada al-Sadr, who has withdrawn from the political process.

In other words, Sudani’s government could be another short-term government just like the previous government, which was formed with the sole aim of achieving specific goals, most notably holding early parliamentary elections.

Accepting Sadr’s demand to hold early elections once again is, on the one hand, aimed at reassuring him that “there is no intention to exclude him,” and on the other, it is aimed at reproducing the “missing political balance,” as noted by leader of the National Wisdom Movement Ammar al-Hakim, one of the most prominent leaders of the Coordination Framework and supporters of Sudani.

But the biggest challenge lies in how to amend the electoral law, especially the mechanisms of agreement on the “distribution of districts,” “the vote counting mechanism” and “the Elections Commission,” which were subjects of contention in the previous elections, as the Coordination Framework accused the previous government of managing the elections in a way that favored Sadr, who won the largest number of seats.

Sadr currently lacks any parliamentary representation to take part in the drafting of the new electoral law, and he rejects any form of “dialogue” with the Coordination Framework to begin with. If Sudani’s government proceeds with drafting an election law that would deal a blow to Sadr, then Sadr could be prompted to return to the streets.

Sudani's anti-corruption campaign of “building effective tools to fight corruption within a maximum period of 90 days from the date of formation of the government,” as he promised, is actually a double-edged sword. This is everyone’s demand both inside and outside of Iraq, and it forces Sudani to engage in very harsh confrontations, some of which might be against his own supporters. This raises the question as to whether Sudani will be ready to engage in a similar confrontation at a time when he has to be very cautious toward Sadr and his current.

Of note, Kadhimi’s government also focused on the fight against corruption as it formed a special committee in this regard. While the committee managed to make some progress, it faced great pressure, which led to its subsequent dissolution by the judiciary.

Sudani’s proposals in terms of creating job opportunities for the youth may collide with the complex economic reality and the need, ultimately, for radical reforms in Iraq.

The Iraqi economy is highly dependent on the state and its financial resources amid very little private sector contribution. Kadhimi’s government had previously adopted an economic reform program dubbed the “white paper.” It relied on privatization, foreign investments, as well as bigger state revenues through taxes and administrative reforms.

However, the program faced widespread opposition on the part of the pro-Sudani political team. So if Sudani opts for radical solutions similar to the white paper proposals, he could lose the support of his political team in parliament. And if he turns toward temporary solutions similar to the solutions of the governments that preceded Kadhimi — chief among them job appointments and scales — then he will further complicate the economic problems facing Iraq and may lose the support of international financial organizations such as the World Bank.

Of note, the public sector is already grappling with inflation and stagnation, and it needs restructuring through cooperation and exchange with the private sector.

In terms of services, securing the necessary amount of electricity for the 2023 summer season is the biggest challenge Sudani has to meet. Electricity production largely depends on the import of Iranian gas, and the plans and projects launched by the previous government — including setting up electricity connections with Saudi Arabia, the Gulf, Jordan and Egypt — and solar energy projects and gas extraction faced strong opposition from the pro-Sudani political team, which deemed this to be an influence of Western and Arab countries that do not get along with the pro-Iran axis in the region.

At the level of foreign relations, Sudani is likely to have a less tense relationship with Iran.  An open question is whether he can expand on Kadhimi's progress in deepening ties with Egypt, Jordan, and the GCC.