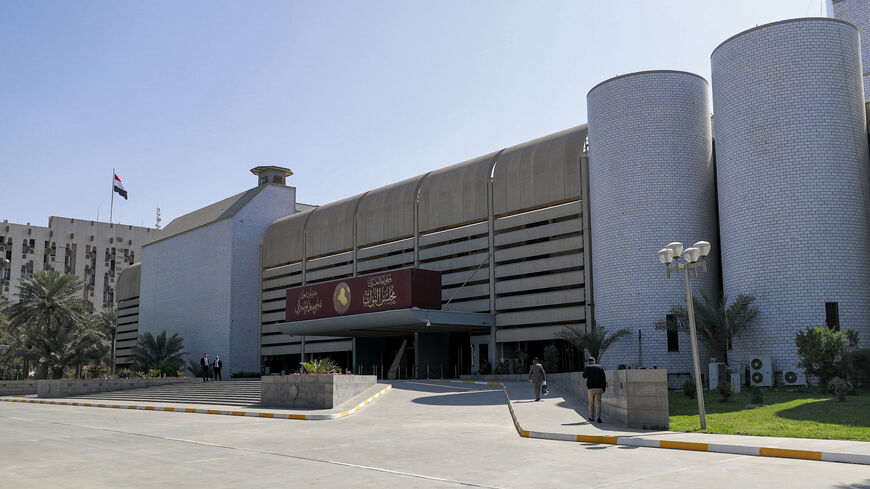 This picture taken on March 26, 2022, shows a view of the exterior of Iraq's Council of Representatives, the country's unicameral legislature, in the capital Baghdad's heavily fortified Green Zone. - AHMAD AL-RUBAYE/AFP via Getty Images 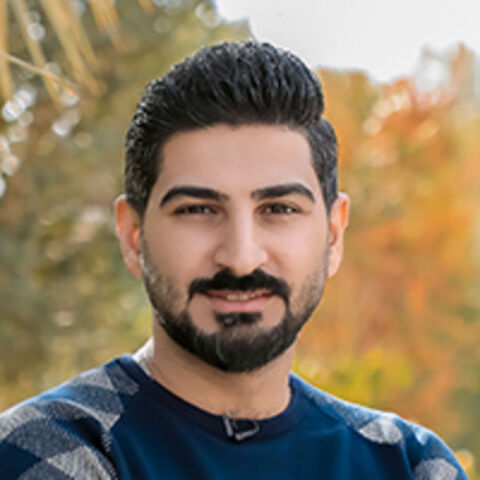 According to a brief statement on the parliament's website, the law aims "to achieve food security, curb poverty, achieve financial stability in light of urgent global developments, to continue providing services to citizens.”

The new law seeks to be a partial alternative to the official budget for 2022, whose approval has been so far hampered by the political crisis in the country.

Nearly eight months after early legislative elections were held on Oct. 10, 2021, Iraq is still unable to form a new government.

The law, to address an urgent food crisis sparked by the war in Ukraine, had been caught in the politics of the deadlocked government formation process, now in its seventh month.

The Saving the Homeland alliance — which includes Muqtada al-Sadr’s movement, the Kurdistan Democratic Party and the Sunni Sovereignty Bloc led by parliament speaker Mohammed al-Halbusi — has been seeking a majority government.

The alliance has been stymied, however, as the next step in the process requires the approval of two-thirds of lawmakers — or 220 of the 329 members of parliament — to proceed with the selection of the president.

They have so far only been able to rally around 200 votes. Thus, there is an effective "blocking third," and so far the gap between the two has proved unbridgable.

On the other side, the Coordination Framework, including former Prime Minister Nouri al-Maliki’s State of Law Coalition and the Iran-backed Fatah Alliance, which is the political wing of the Popular Mobilization Units (PMU) headed by Hadi al-Amiri, in addition to their Kurdish ally the Patriotic Union of Kurdistan, are forming this so-called blocking third and seeking participation in the new government.

In early May, the Federal Supreme Court of Iraq found unconstitutional the bill on food security and development that the government presented to parliament. The government had introduced this legislation as a temporary solution for the conduct of the state’s affairs in light of the inability to pass the budget law due to the political blockage in Iraq.

The court justified its decision by stating that this government is a caretaker government with limited powers and is not entitled to submit bills to parliament.

This time, the Iraqi parliament took the initiative to put to a vote an alternative food security bill drafted by the parliamentary Finance Committee and not by the government of Mustafa al-Kadhimi, in compliance with the decision of the Federal Supreme Court.

The law was supported by 273 members of parliament. Some of the Kurdish parties and certain members of the Coordination Framework left the parliament before the vote in a sign of objection.

The Kurdish parties claim that the law has not given a fair share to the Kurdistan Region. Some in the Coordination Framework are opposing the law because it will empower the caretaker government to continue for a longer time and with resources.

Amid the continued absence of a federal public budget, government expenditures, or spending, for the year 2022 are now governed by Article 13 of the Financial Management Law No. 6 of 2019 as amended, which stipulates that the minister of finance is to issue instructions for disbursement at a rate of 1/12 of the total expenditures in the 2021 budget.

Amid these challenges facing the Iraqi government, the need for additional allocations — which can be called “compensatory allocations” — has become more urgent.

The emergency food law, according to the prime minister’s adviser for financial policies Mazhar Muhammad Salih, has estimated these allocations.

He told Al-Monitor, “The global and local rise in prices weakened the purchasing power of the financial allocations related to national food security. The average food bill is expected to increase by 40% compared with previous years. This is in addition to the increase in the import prices of oil, gas, electricity derivatives, and other imported and local government purchases. Add to this the rise in the purchase price of wheat to 750,000 dinars per ton.”

The Food Security Law turned into a pressure card between the various political blocs over the formation of the next government. Sadr backed the bill while opposition parties, most notably some members of the Shiite Coordination Framework, rejected it, citing corruption.

However, the head of Al-Fateh parliamentary bloc, Abbas Al-Zamili, announced that others in the Coordination Framework decided to participate in the parliament session on June 8 and vote in favor of the bill.

Iraqi Finance Minister Ali Allawi confirmed that the food security bill drafted by the Finance Committee is not a substitute for the budget law. Allawi added in a statement relayed by local media before the parliament vote June 8 that “the budget law represents the state's economic and investment vision, and it cannot be replaced by the emergency food security law.”

The law drew controversy among popular circles as well. Citizen Mustafa Akram described it as a double-edged sword. “This law is crucial for providing food and electricity. Iraq is in debt to Iran, and these dues must be paid to continuously provide gas and electricity.”

Samah Ibrahim said the law opens the door for corruption as it includes paragraphs that may be interpreted as falling within the scope of the public budget and not an emergency law. “This law provides for investment allocations, public appointments and others. It is not limited to food security,” she said.