There are rising concerns over food security in Iraq due to the war on Ukraine and the drought, but the agriculture and trade ministries say there is no need to be concerned over the country’s strategic food reserve stocks. 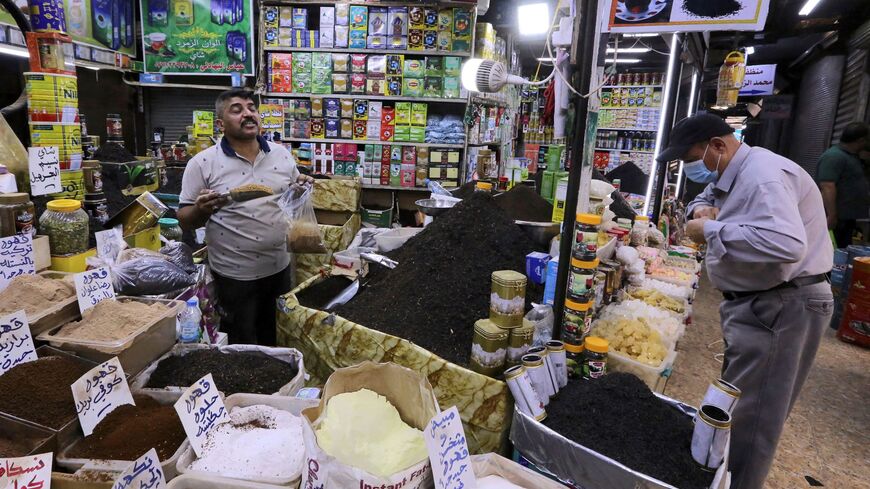 Iraqis sell goods at al-Shorja market during Eid al-Fitr holiday, which marks the end of the holy fasting month of Ramadan, on May 4, 2022. - SABAH ARAR/AFP via Getty Images

The parliamentary Finance Committee announced on May 14 that the money allocated under the food security bill had increased to 27 trillion Iraqi dinars. Yet this bill was aborted by the Federal Court on May 15, because it contradicts the constitution, which embarrassed the cabinet, according to the finance minister.

The federal court rejection came a day before discussing it in the parliament. The decision was denounced by the three elements of the largest coalition in the parliament, Saving the Homeland, which consists of Muqtada Sadr’s movement, Masoud Barzani’s Kurdistan Democratic Party and Muhammad Halbousi’s Sovereignity Alliance.

On May 16, the head of the parliamentary Finance Committee, Hassan al-Kaabi, who belongs to the Sadrist movement, said that aborting the law means depriving the people of electricity and food, while the movement’s opponents in the Coordination Framework welcomed the court’s decision.

A week earlier, the Iraqi government announced wheat imports from Germany and Australia, given the country’s low strategic reserve as a result of the war on Ukraine and the drought, as well as the high prices of fuel, seeds and fertilizers.

Trade ministry spokesman Mohamed Hanoun told Al-Monitor that the strategic wheat reserve is sufficient for only one month. He added that the Trade Ministry secured “a stockpile of wheat and ration card commodities for a period of six months,” and the government has allocated $1 billion to add 3 million tons of wheat to the strategic reserve. Local production of 50,000 tons per day will also increase the reserve, he said.

He indicated that “the grain crisis is global, and the Trade Ministry has been handling it efficiently, with the funds obtained from the Finance Ministry, although the state budget has yet to be approved.”

Hamid al-Nayef, official spokesman for the Ministry of Agriculture, told Al-Monitor that the 2022 summer agriculture plan will irrigate an area of ​​1,846,000 dunums, in coordination with the Ministry of Water Resources. “The ministry has harnessed all means in order for farmers to deliver wheat crops to the government silos," he said, "and raised the purchase price of wheat to 750,000 dinars per ton so as to encourage the farmer.”

Mazhar Muhammad Salih, a financial adviser to Iraqi Prime Minister Mustafa al-Kadhimi, told Al-Monitor, “Iraq is dependent on Ukraine for 70-80% of its basic commodity import needs.” As a result, he said, the average food bill is expected to increase by 40% compared with previous years.

Haitham Khazali, an economic researcher at al-Hadaf Network for Political and Media Analysis, described the emergency food security bill to Al-Monitor as “an alternative mini-budget to the real budget.” He said that calling it an emergency bill is not in line with the concept of security.

Khazali expressed concerns over “putting 8 trillion Iraqi dinars at the disposal of the Trade Ministry, as it could open inlets for corruption and embezzlement of public funds and could further indebt the country.”

Yasser al-Metwalli, a member of the Baghdad Economic Forum and economic researcher, told to Al-Monitor that successive governments have failed to provide food security.” He noted that agriculture was the second contributor to GDP after oil in the 1990s, and Iraq grew 6 million tons of wheat, at a time when it needed 4 million tons.

Metwalli attributed the decline in production to neglect of land reclamation, as well as other countries taking too much water from the Tigris and Euphrates rivers and ineffective irrigation systems.

Nabil Jabbar Ali, an economic researcher at the American University of Iraq, told Al-Monitor,  “Iraq does not have strategic warehouses to store grains for long periods, but rather silos to collect the grains scattered in various places in Iraq in order for farmers to market them and then re-transport them to private mills.”

Ali said that “the government was relying on the bill it submitted to the Iraqi parliament to finance the ration card program and to continue financing the farmers.” Yet, Ghaleb Damai, a political researcher and professor at Al al-Bayt University, said that these hurdles aim to hinder the efforts to form national majority cabinet and to force the tripartite alliance to include the Coordination Framework in the next cabinet.