The Palestinian government is expected to conclude an agreement with an Egyptian company to develop the Gaza Marine gas field and start extracting gas from it by the end of the year. 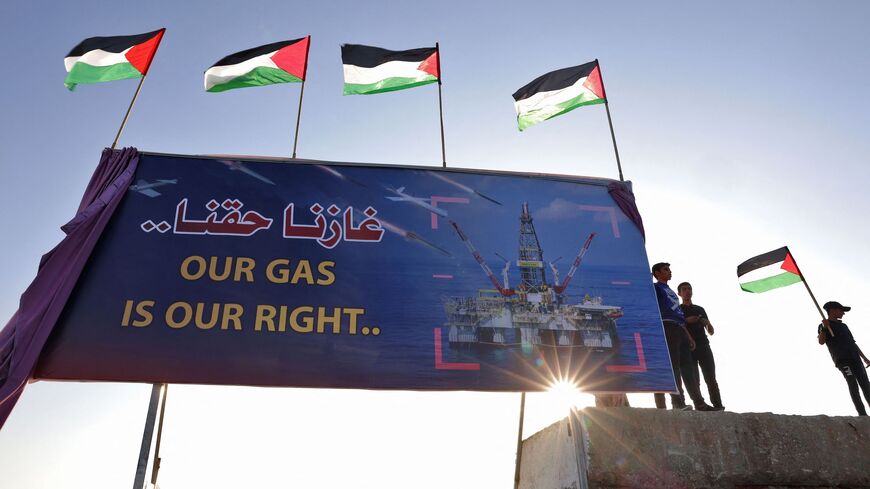 In a rally at the Gaza City sea port, Palestinians demand access to gas from maritime fields in the eastern Mediterranean as well as the lifting of the blockade on Sept. 13, 2022. - MOHAMMED ABED/AFP via Getty Images

RAMALLAH, West Bank — The Palestinian Authority formed a ministerial committee Oct. 17 to oversee the sovereign Palestine Investment Fund on progress toward an agreement on the operation of the Gaza Marine gas field off the coast of the Gaza Strip.

The fund and the Athens-based Consolidated Contractors Company each own a 27.5% share in the field. The remaining 45% will be owned by the operating company, the Egyptian Natural Gas Holding Company.

Palestinian Minister of Social Affairs Ahmad Majdalani told Al-Monitor that an agreement is expected to be signed by the end of this year and work will begin at the beginning of next year.

Majdalani denied Israeli media reports that Israel will get a financial share in the field as a signatory of the agreement, saying, “It is an agreement between Palestine and Egypt alone.”

Hamas, which has controlled the Gaza Strip since 2007, has not commented on the issue. The movement has previously vowed to protect the wealth of the Palestinians it at all costs.

Asked about Hamas' involvement in the gas field issue, Majdalani said, “There was no problem with Hamas on the matter.”

He went on, "Natural resources belong to official authorities, not parties, and Hamas is a political force that imposed its de facto control over Gaza. This does not give it a legitimate authority or a role in international and regional agreements,” he added.

Majdalani pointed out that although the field is one of the smallest in the Mediterranean, it is expected to generate about $7 billion in revenues. He explained that the Egyptian company that will handle the gas extraction and transport the extracted gas through underwater pipelines to the Arish complex for gas liquefaction and export.

While the Gaza Marina field was discovered at the end of the 1990s, the field has yet to be exploited due to Israeli obstruction. The field is estimated to contain 1.1 trillion cubic feet of natural gas and have a production capacity of 1.5 billion cubic meters per year over the course of 20 years.

On Sept. 13, Hamas held an event in Gaza attended by several factions during which it unveiled a mural reading, “Our gas is our right.” It also pledged to protect the gas resources in the Gaza field.

Suhail al-Hindi, a member of Hamas’ political bureau, told Al-Monitor, “This wealth belongs to the Palestinian people and Israel cannot have a share in it, let alone any individual who does not represent the people and the resistance. No one has the right to take advantage of our wealth. This is our pledge and our natural right as Palestinians.”

Asked about Hamas’ stance on gas extraction, Hindi said, “The issue is currently being discussed by Hamas and the resistance [factions], and we shall agree on a stance without media attention.”