Palestinian factions in the Gaza Strip may be coordinating with Hezbollah, which could complicate Israel-Lebanon gas talks. 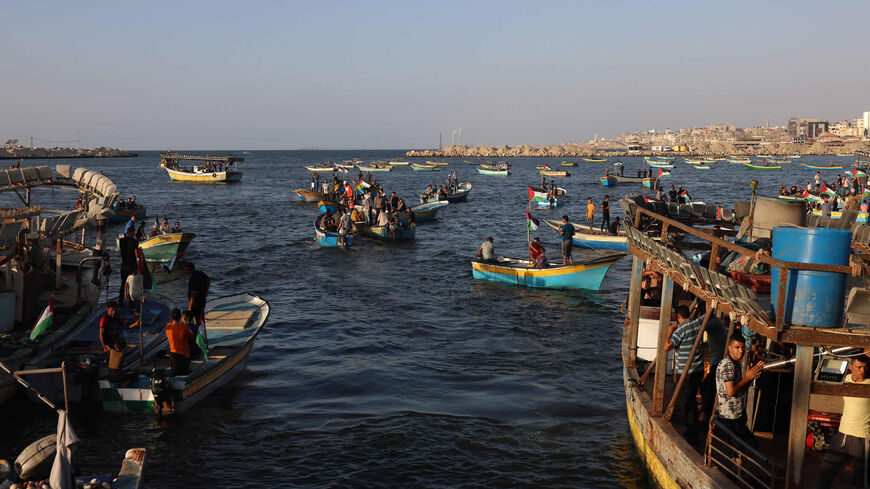 Palestinians participate in a rally at the Gaza City seaport to demand their right to receive gas from maritime fields in the eastern Mediterranean and the lifting of the Israeli blockade, Gaza Strip, Sept. 13, 2022. - Mohammed Abed / AFP via Getty Images

RAMALLAH, West Bank — The Palestinian factions in the Gaza Strip have laid the foundation stone for a sea passage that connects the enclave to the outside world, during a popular event held in the Gaza seaport Sept. 13.

The event also witnessed the inauguration of a mural that read “Our gas is our right.”

During their speeches at the event, the leaders of the factions and the joint armed operations room called for allowing the Palestinians to benefit from their own natural resources, namely gas, and stressed that they would not allow Israel to steal their gas.

The event has raised talk about the natural gas fields off the Gaza coast in the Mediterranean Sea.

It also coincided with tensions between Israel and Lebanon over the demarcation of their maritime borders, with Hezbollah threatening Israel against extracting gas from a disputed area as long as Lebanon is not allowed to do the same.

It seems that the Palestinian factions’ move came also to challenge Israel, possibly indicating that there has been coordination between the factions and Hezbollah ahead of the event in the Gaza port.

During the event, a number of Shehab suicide drones flew over the Gaza coast, in a message that the Palestinian factions have the ability to strike Israeli gas extraction barges in the Mediterranean.

In 1999, the Gaza Marine 1 natural gas field was discovered by the British Gas Corporation 36 kilometers (22 miles) west of Gaza’s coast in an area located in Palestinian territorial waters. A year later, the Gaza Marine 1 field was discovered on the common border with Israel. But all those years, Israel has prevented the Palestinians from benefiting from their own natural gas resources.

The Palestinians believe that today the time is right to raise the natural gas file amid a growing global demand for gas in light of the ongoing Russian war on Ukraine, the heightened tension between Lebanon and Israel over the disputed gas fields and the US mediation efforts to prevent a military confrontation between the two countries.

Suhail al-Hindi, a member of Hamas’ political bureau, told Al-Monitor that the recent event organized by the Palestinian factions was a message to Israel stressing the Palestinians’ right to gas, and that the factions have the capacities to confront Israel to gain this right, whatever the obstacles and difficulties. “We also sent a message of our right to have a waterway that connects Gaza to the world,” he said.

He noted, “We may face difficulties to gain our right, but we took the first step on this path and sent a message to the enemy and mediators about that.”

Hindi refused to reveal details of how the factions would complete the waterway and eventually gain their rights to Gaza’s natural gas, saying, “This file was raised in the past, and will be raised later with [all the parties involved]. But as to where, when and how this will be achieved, the coming days will tell.”

Thabet al-Amour, a Palestinian author and political analyst, told Al-Monitor that the Palestinians followed in the footsteps of Hezbollah by raising the natural gas file, as they saw that Israel took a step back in the Karish gas field, which lies in the disputed area with Lebanon and where an Israeli gas rig had begun extracting gas in June.

Thus, he added, it seems the Palestinian factions wanted to raise and deal with their own gas file the same way Hezbollah did.

Amour, however, ruled out the possibility of a confrontation between the Palestinian factions and Israel over the gas fields, in light of other major files that are a source of tension between the two parties, including the Judaization of Jerusalem, the repeated raids at Al-Aqsa Mosque and the ongoing Israeli settlement activities in the West Bank.

He noted that the gas file was never a reason behind the previous wars on Gaza, while the waterway project was included in the truce agreement 2014 — although it has yet to be implemented eight years on.

The faction’s message seems to have reached Israel.

In a Facebook post Sept. 14, Danny Danon, Israel’s former UN ambassador and current chairman of World Likud, the Likud party’s global communication wing, said, “After [Prime Minister Yair] Lapid’s apparent surrender to Hezbollah, and after relinquishing a large part of the sea and gas reserves, now Hamas too has its appetite opened, and intends to blackmail Lapid in order to extract gas off the coast of Gaza. Lapid is causing long-term political-strategic damage to Israel that will take years to be repaired.”

In a Sept. 13 article, Israeli political analyst Yoni Ben-Menachem said, “The Palestinian organizations are trying to follow in the footsteps of Hezbollah by threatening Israel [when it comes to gas resources]."

According to Ben-Menachem, Israeli concerns have grown after the recent meeting between Hezbollah leader Hassan Nasrallah and Islamic Jihad leader Ziad al-Nakhalah in Beirut, during which they discussed the possible consequences of a confrontation with Israel at the maritime border.