Egypt reached demarcation agreements with Greece and Cyprus in August. 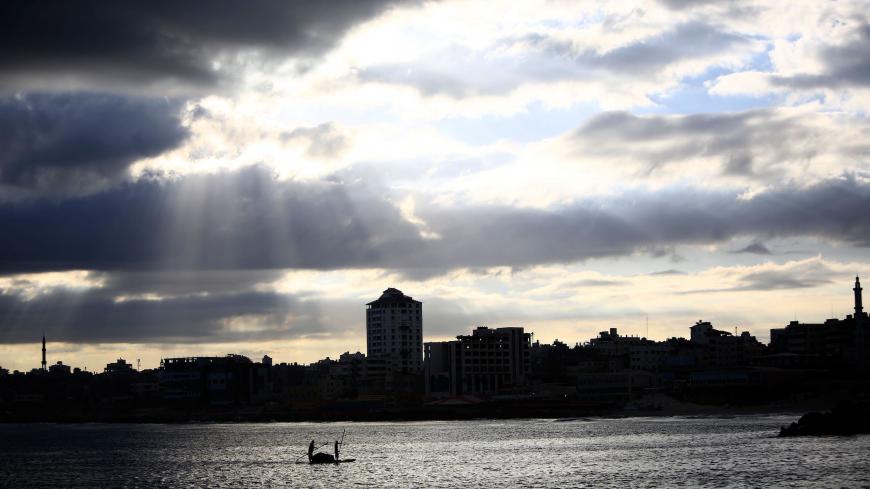 Palestinian fishermen fish in the Mediterranean Sea near Gaza City on May 10, 2019, a week after a deadly two-day escalation in violence between the Hamas-ruled Gaza Strip and Israel. - MOHAMMED ABED/AFP via Getty Images

GAZA CITY, Gaza Strip — Palestinian officials have taken the first practical steps to demarcate Palestine's maritime border with Egypt by forming a team of specialists to negotiate with Cairo. In September, the Palestinian Authority signed the charter of the East Mediterranean Gas Forum (EMGF).

Egypt reached maritime border demarcation agreements with both Greece and Cyprus in August before singing onto the EMGF, which includes Israel, Italy, Jordan, the Palestinian Authority and Greece. The forum aims to strengthen cooperation between the six member states and allow each country to explore its own natural resources in the Mediterranean Sea. These regional developments came as Turkey began drilling for natural gas in a disputed maritime zone with Greece.

Palestinian Ambassador to Ankara Faed Mustafa told the Turkish press June 22 that Palestine was ready to negotiate with Turkey to demarcate the maritime border. “We are open to any idea that would deepen our relations with Turkey, including a deal on the exclusive economic zones,” he said.

The official said he expects the negotiations with Egypt to kick off in Cairo in the coming months after the two parties agree on a date.

He explained that the natural gas reserves discovered 36 kilometers (22 miles) off the Gaza Strip coast in 1999 would meet local energy and gas needs for at least 20 years. He said they would turn Palestine into a gas-exporting country and bring in billions of dollars per year. The Palestinian government needs to resolve a financial deficit due to declining international and Arab aid and Israel withholding Palestinian tax revenues.

On Oct. 8, 2019, Palestine presented maps and coordinates to the United Nations and the Arab League.

The PA has taken a series of steps to demarcate its maritime border. They include informal talks on the sea borders ongoing with Egypt since 2016 and Palestine's 2015 accession to the UN Convention on the Law of the Sea. The Palestinian government formed a national team to discuss the demarcation of the maritime border with neighboring countries in June 2017.

The 1982 UN Convention on the Law of the Sea reads that coastal states have jurisdiction over their natural resources within 200 nautical miles from their coasts and have the right to claim them as exclusive economic zones.

Samir Abu Mdallala, dean of the Faculty of Economics and Administrative Science at Al-Azhar University in Gaza, told Al-Monitor that it is important for Palestinians to negotiate their maritime border as many Mediterranean countries are signing such agreements. He stressed that the Palestinians need to exploit the natural resources that Israel has been extracting for decades.

Abu Mdallala added that the maritime border demarcation with Egypt would significantly reduce maritime accidents such as the killing of Palestinian fishermen who accidentally enter Egyptian territorial waters. He said the talks will also allow Palestinians to benefit from the huge fish wealth of the area.

Hanna Issa, a professor of international law at Al-Quds University, told Al-Monitor that the maritime border demarcation between Palestine and Egypt is essential to preserve Palestinian rights. However, he warned, “Such a step will remain incomplete as long as Israel does not recognize the State of Palestine under the UN resolutions and continues to occupy Palestinian lands and waters.”

The UN Conference on Trade and Development estimated in December 2019 that the cost of the Israeli occupation to the Palestinian people between 2000 and 2017 stands at $47.7 billion. According to the report, much of these losses are the direct result of Israeli control of Palestinian natural resources.