Palestinian officials are discussing demarcating their maritime borders with the Arab League and the United Nations, threatening to resort to international courts should Israel refuse to cooperate. 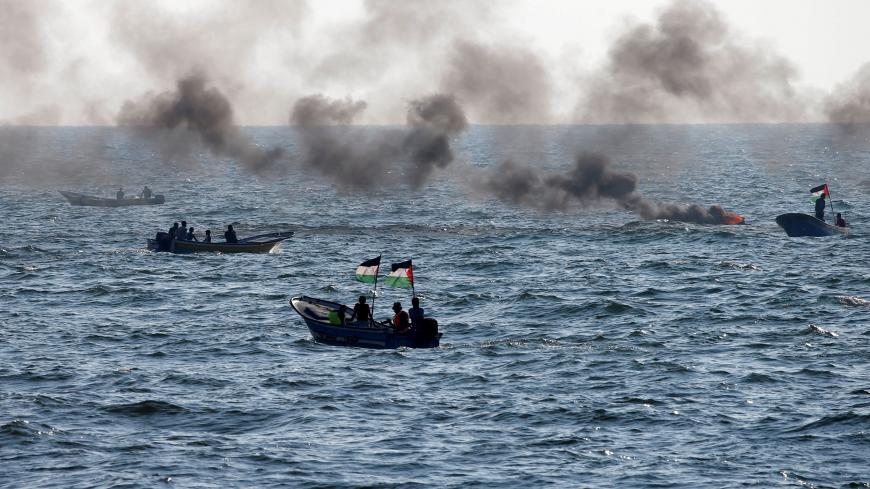 Palestinians sail with boats toward the maritime border with Israel as smoke rises from a burning tire during a protest, in the Mediterranean Sea off the coast of the northern Gaza Strip, Sept. 10, 2018. - REUTERS/Mohammed Salem

This move, which aims to reinforce the status of the Palestinian state around the world, is part of a series of actions taken by the Palestinian government in recent years in this direction.

In 2015, Palestine participated for the first time in the meeting of state signatories to the 1982 UN Convention on the Law of the Sea in New York, where Palestinian officials confirmed their commitment to the convention and stressed the rights of people to benefit from natural resources and preserving the environment. The Palestinian Authority (PA) held demarcation talks in June 2016 with Egypt, with which it shares a common maritime border. The PA is also expected to hold talks with Cyprus for the same purpose.​

In June 2017, a national team of experts was formed to work on demarcating the Palestinian maritime borders of the Mediterranean Sea.

This month, at a press conference after Maliki turned over the file to the Arab League, he said an official Palestinian delegation also had submitted at the end of September documents to the UN, including the maps and coordinates of the Palestinian maritime borders.

“We asked UN Secretary-General Antonio Guterres to circulate the maps and coordinates among the member states to help us in our efforts to set up the maritime borders, especially with regard to the exclusive economic zone, which the state of Palestine has the right to exploit and invest in,” Maliki said.

An official at the Palestinian Ministry of Foreign Affairs, who spoke on condition of anonymity, told Al-Monitor the purpose of depositing the maps and coordinates with the UN and the Arab League is to introduce the world to the Palestinian maritime areas and to provide evidence that Israel is violating these areas, especially within the Gaza Strip coastline, and stealing Palestinian natural resources, namely natural gas.

The source stressed that the maritime demarcation step will be followed by other moves such as resorting to international arbitration courts if Israel keeps interfering. The source explained that as per the UN Convention on the Law of the Sea, every state has the right to explore natural resources in its own economic zone. However, Israel chose not to join the convention.

He pointed out that Israel for years has been using many of the gas fields in Palestinian waters while restricting Palestinians from extracting gas from the Gaza Marine 1 gas field, which was discovered in 1998. The PA since has awarded an exclusive contract to British Gas Co. and Palestinian Consolidated Contractors Co. (CCC) to explore for natural gas in Gaza Strip waters. The two companies discovered two gas fields: Gaza Marine off the shore of the strip, and Gaza Marine 2 on the common border with Israel.

The British company estimated the capacity of Gaza Marine 1 at about 1.4 trillion cubic feet.

A Sept. 10 report by the UN Conference on Trade and Development (UNCTAD) showed that Israel's occupation of the Palestinian territories has deprived Palestinians of billions of dollars' worth of natural resources, predicting that economic losses will continue to rise.

Mohammad Awartani, director of the Natural Resources and Gas Fields Unit of the Massader for Natural Resources and Infrastructure Development Co. in Ramallah, told Al-Monitor that the PA’s demarcation submissions to the UN and the Arab League will result in investments in the Palestinian territories, particularly in gas exploration. Awartani explained the submissions will also speed up potential Palestinian strategic projects for natural resources, including gas fields, which could provide significant permanent energy sources for Palestinians in both the West Bank and Gaza Strip.

Hanna Issa, an international law professor at Al-Quds University in the West Bank, told Al-Monitor the main dilemma facing Palestinians is Israel’s failure to sign on to that convention, which would bind it to demarcate its maritime borders with its neighboring countries. He explained that Israel violates the rules of international law by controlling Palestinian maritime resources, since the economic zone off the shores of the Gaza Strip belongs to the Palestinians.

Issa said Israel has blocked any Palestinian step since 1998 to extract gas or any natural materials discovered in the Palestinian economic zone, and prohibits Palestinians from fishing in the zone agreed upon in the 1993 Oslo Accords, which extends up to 20 nautical miles.

Moin Rajab, an economics professor at Al-Azhar University in Gaza, told Al-Monitor he believes the success of the PA’s efforts will initially depend on other countries pressuring Israel to acknowledge the borders. If that doesn't work, the PA will resort to international courts to settle the issue, he noted.

The natural resources in the Palestinian economic zone, including gas and oil, would meet Palestinians’ need for energy supplies and help them overcome the long-standing financial crisis gripping their country, he added.

The Palestinians’ effort to delineate their maritime borders remains a real challenge, especially along the common border with Israel, given its sea blockade on the Gaza Strip that's been in place for 13 years.