Al-Monitor obtained information from Palestinian and Egyptian officials about the success of Egyptian mediation in pushing Israel to allow the start of extracting natural gas off the coast of the Gaza Strip. 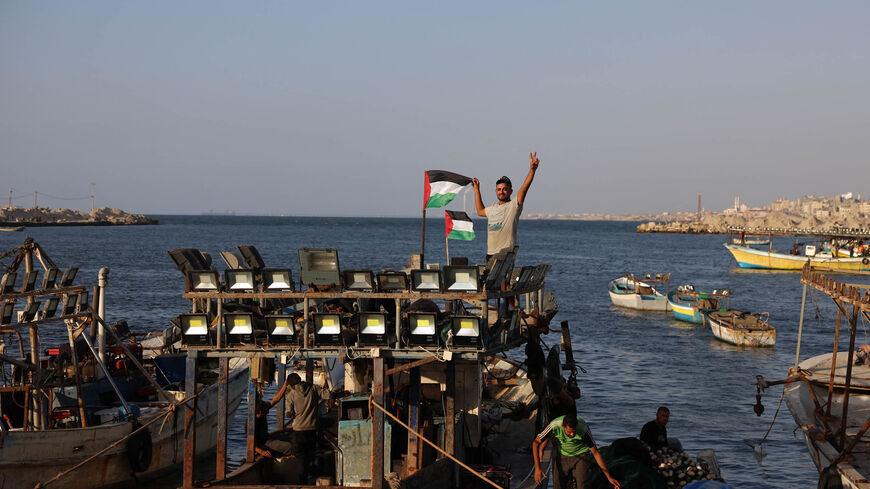 Palestinians participate in a rally at the Gaza City sea port, in which they demand their right to receive gas from maritime fields in the eastern Mediterranean and the lifting of the Israeli blockade, Gaza Strip, Sept. 13 2022. - Mohammed Abed/AFP via Getty Images

GAZA CITY, Gaza Strip — Egypt succeeded in persuading Israel to start extracting natural gas off the coast of the Gaza Strip, after several months of secret bilateral talks, according to information provided to Al-Monitor by an official in the Egyptian intelligence service and a member of the PLO Executive Committee.

This development coincides with the rising global energy prices caused by Russia's war on Ukraine, while European nations seek alternatives to Russian gas ahead of the winter season.

It also comes after years of Israeli objections to extract natural gas off the coast of Gaza on security grounds, preventing the Palestinians from benefiting from their own natural resources, namely in the Gaza Marine field.

The field, which lies about 30 kilometers (19 miles) west of the Gaza coast, was discovered in 2000 by British Gas (currently BG Group) and is estimated to contain more than 1 trillion cubic feet of natural gas. The cost of development of the field is estimated at about $1.2 billion. But the field remains untapped as the Palestine Investment Fund, which is the Palestinian body responsible for developing the field, has not been able to extract its gas all those years due to Israel’s refusal.

The official in the Egyptian intelligence service told Al-Monitor on condition of anonymity, “An Egyptian economic and security delegation discussed with the Israeli side for several months the issue of allowing the extraction of natural gas off the coast of Gaza. The delegation finally succeeded in reaching a compromise that would benefit all relevant parties, the most important of which are Israel and the Palestinian Authority [PA].”

On Feb. 21, 2021, the PA and Egypt signed a memorandum of understanding on the development of the Gaza Marine gas field. Under the agreement, the Egyptian Natural Gas Holding Company and the PA would cooperate to develop the gas field, transfer gas to the Palestinian areas and possibly sell it to Egypt.

The Egyptian official explained that Israel required the start of practical measures to extract gas from the Gaza fields at the beginning of 2024, to ensure its own security.

The member of the PLO Executive Committee told Al-Monitor on condition of anonymity that Egypt informed the PA of Israel's approval to start extracting Palestinian gas off the coast of Gaza. He pointed out that this came after political pressure exerted by European countries on Israel to meet their needs for gas alternatives to Russian gas.

The PLO official said that under the agreement, Egypt and Israel would supervise the extraction process, and that part of the gas will be exported to Egypt, and the bulk of it will be exported by Israel to Europe through Greece and Cyprus. The financial revenues from the process of exporting Palestinian gas will return to the treasury of the PA, with part of these revenues allocated to support Gaza’s economy.

Meanwhile, it seems Hamas, which controls the Gaza Strip, is watching the world rush to energy sources and does not want to leave empty-handed from the revenues generated by the gas extraction off the Gaza coast.

During a public event held at the Gaza port Sept. 13, the Palestinian factions laid the foundation stone for a sea corridor linking the Gaza Strip with the outside world, and inaugurated a mural inscribed with the text, “Our gas is our right.”

In their speeches during the event, the faction leaders demanded that the Palestinians be allowed to benefit from their own gas resources, and stressed that they would not allow Israel to steal it.

An Israeli agreement to extract Palestinian gas can guarantee long years of calm with the Gaza Strip, given that supporting its economy is one of the most effective means to prevent Hamas from launching rockets at Israel.