Palestnian officials claim the project has been complicated by Israel, which controls the coastal waters off Gaza. 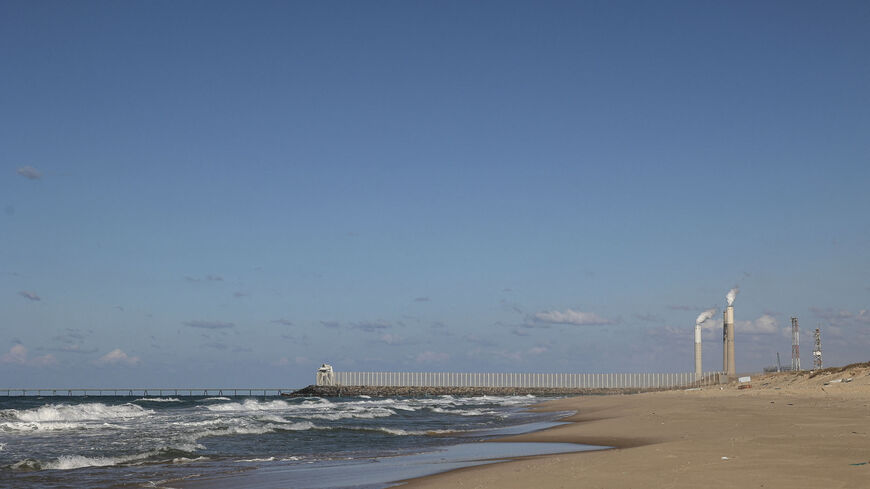 The beach in Beit Lahia looks out on the towers of an Israeli power plant in the city of Ashkelon, Gaza Strip, Dec. 15, 2021. - Mohammed Abed/AFP via Getty Images

During a meeting in Cairo June 14, Mulla told the chairman of the board of directors of the Palestine Investment Fund (PIF), Mohammad Mustafa, that Egypt will spare no effort to help support the Palestinian economy in light of the strong relations binding Egypt and the Palestinian  Authority.

Mulla also stressed Egypt’s firm position and support for Palestinian rights, including the Palestinian inherent right to exploit natural resources and affirm Palestinian sovereignty over such resources, foremost of which is the Gaza Marine field.

Mustafa praised the constructive cooperation with the Egyptian Ministry of Petroleum and Mineral Resources in the oil and gas industry, as he stressed the importance of benefiting from the Egyptian ministry’s expertise in the field given the great successes it has achieved.

In February 2021, both Egypt and the Palestinian Authority (PA) signed a memorandum of understanding on developing the Gaza Marine field off the coast of the Gaza Strip.

Under the memorandum, the Egyptian Natural Gas Holding Company would work with the PA on a deal to extract natural gas from the Mediterranean and transport it to the Palestinian areas.

The Gaza Marine field, located 36 kilometers (22 miles) west of the coast of Gaza in the waters of the Mediterranean, was discovered in 2000 in an area under the control of the PA and is estimated to contain more than 1 trillion cubic feet of natural gas.

Palestine, as a member of the Eastern Mediterranean Gas Forum, which also includes Israel, Egypt, Greece, Italy, Jordan and Cyprus, hopes that the direct Egyptian intervention will allow the development of the offshore gas field in the Gaza Strip after years of Israeli objections that have obstructed the conclusion of agreements.

Palestinian officials say their attempts to extract natural gas have been thwarted by Israel.

According to the Egyptian state-owned newspaper Al-Ahram, Egypt is the only country that has signed a memorandum with the Palestinian side for the development of the field.

The Gaza Marine field is seen as an opportunity for the cash-strapped PA to join the gas boom in the eastern Mediterranean, providing a great source of income capable of reducing Palestinian dependence on foreign aid and Israeli energy. But Palestinian political differences and conflicts with Israel, including several economic factors, have delayed plans to develop the field.

Al-Monitor tried to contact Egyptian and Palestinian officials to comment on the next steps moving forward, but to no avail.

Palestinian political analyst Akram Atallah told Al-Monitor over the phone that despite the signing of a memorandum between Egypt and the PA for the development of the Gaza Marine field as a prelude to the extraction of natural gas, Israel remains the main player in completing the agreement, as the field is located off the coast of Gaza, which is controlled by Israel.

He said that Egypt has great experience in extracting and liquefying natural gas thanks to its recent gas discoveries. However, he continued, the completion of the agreement should take place in the framework of an Egyptian understanding with Israel, which has obstructed the extraction of natural gas from the Gaza field over the past years.

Since discovering the Gaza Marine field in 2000, the British Gas corporation has tried to negotiate with Israel to begin operations in the field. But the Israeli objections led a consortium of foreign companies responsible for developing the field to exit it. This turned the PIF into the only field owner. According to Reuters, the PIF is looking for a company to buy and operate 45% of the field.

Atallah believes that Israel wants to monopolize and sell Palestinian gas and does not want Palestine to sell gas, as this would enable it to be independent from and compete with Israel and will bind Palestine to the world through interests and agreements, which Tel Aviv does not want.

However, Israel claims that its objections to the development of the Gaza Marine field is due to its concerns that the revenues from the natural gas sales would end up in the hands of Hamas, which controls the Gaza Strip, to fund more attacks against Israel.

Israel’s former Defense Minister Moshe Ya'alon said in statements in 2007 that the Hamas movement would benefit from the gas revenues to launch attacks against Fatah, gas facilities as well as Israel. Until a political settlement is reached and a gas deal is concluded, Israel will continue to prevent Hamas from controlling the Gaza Strip, Ya’alon continued.

Meanwhile, the PA imports more than 90% of its electricity from Israel to the West Bank, while it relies on a Jordanian line and on solar energy to feed the city of Jericho. The gas extracted from the Gaza Marine field would be used to run power stations in Gaza and Jenin.

Tamer Abu Bakr, Egyptian petroleum expert and chairman of the board of directors of the Petroleum and Mining Chamber in the Egyptian Industries Federation, told Al-Monitor over the phone that Egypt’s participation in the development of the Gaza Marine gas field could materialize by linking the gas field to export and liquefaction stations in Egypt.

He said that Egypt’s gains, if an agreement is reached, would be exemplified either by a share of natural gas from the field, or by financial compensation in return for the development work that the Egyptian authorities will carry out, which is a common practice around the world.

Amani al-Sinwar, researcher in international relations, told Al-Monitor that Egypt will benefit from this agreement for two reasons. First, Egyptian companies will have the opportunity to invest and obtain no less than 45% of the Gaza Marine field in exchange for its development. This, she said, would be part of Egypt’s efforts to turn into a regional energy hub.

Second, she added, Egypt will benefit politically if it manages to conclude the agreement and break the Israeli veto, which has blocked any use of Palestinian gas fields since 2000. This would further boost Egypt’s regional position and role and its sponsorship of the Middle East peace process.

Atallah said the fate of the Gaza Marine field will depend on a political agreement that allows the Palestinians to develop the field and end the Israeli blockade imposed on Gaza, but it is unlikely for any progress to be made in the absence of an agreement with Israel.