How Egypt benefits from gas agreement with Israel

Egypt and Israel agreed to establish a pipeline connecting Israel’s offshore Leviathan natural gas field to the liquified natural gas terminal in Egypt, a move that was hailed as a major step toward economic, political and security gains for Cairo. 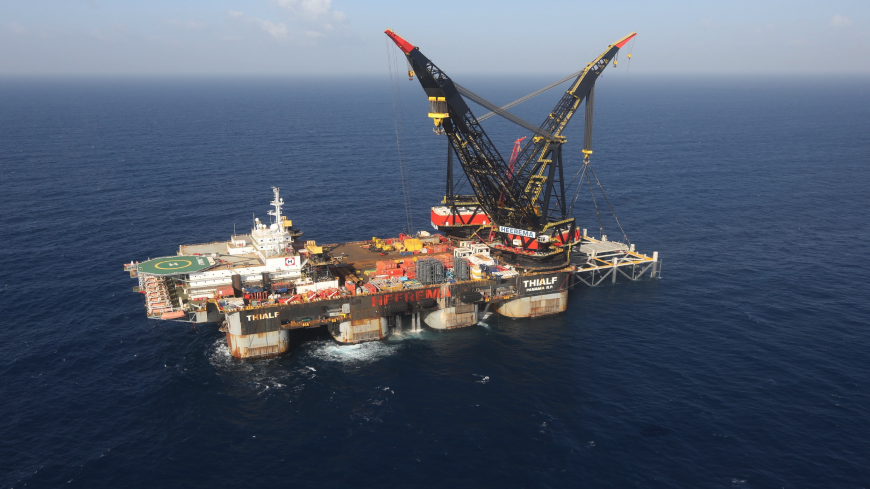 This picture taken on Jan. 31, 2019, shows an aerial view of the SSCV Thialf crane vessel laying the newly arrived foundation platform for the Leviathan natural gas field in the Mediterranean Sea, about 130 kilometers (81 miles) west of the coast of the Israeli city of Haifa. - MARC ISRAEL SELLEM/AFP via Getty Images

The agreement came during the visit of Egyptian Minister of Petroleum and Mineral Resources Tarek el-Mulla to Israel Feb. 21 to “hold talks to support the goals and efforts of the Eastern Mediterranean Gas Forum.”

Speaking at the start of the meeting, Netanyahu said there was enough gas for both countries to meet their needs to become major exporters. He said the visit was an “important day” for cooperation in the energy field and other fields and he believed this was a new era of peace and prosperity.

Sources familiar with the talks told Agence France-Presse Feb. 21 that the Israeli-Egyptian agreement aims to increase gas exports to Europe from the gas liquefaction facilities in Egypt and, therefore, meet the increasing European demand for natural gas.

Osama Kamal, a former Egyptian petroleum minister, told Al-Monitor, “The agreement has economic, political and security dimensions. Egypt has been [reaching out] for a long time to neighboring countries such as Cyprus and Israel, which have discovered gas fields, or other countries that have potential to produce gas such as Greece and Palestine.”

“These countries do not have a large infrastructure that enables them to exploit the riches they have, while Egypt has the largest infrastructure in its regional surrounding, which is close to all these fields,” he added.

Kamal said Egypt has two LGN stations, the first in Idku in the Egyptian Delta and another one in Damietta in the far north.

“Since 2011, the two stations have been idle or have run at less than their potential capacity. Additional gas supplies would mean that stations would normally resume operations, which would lead to economic benefits and create jobs,” he explained.

Kamal said the Israeli-Egyptian agreement indicates a serious confirmation of the importance of the Eastern Mediterranean Gas Forum in calming the situation between the region’s countries that had a dispute over oil discoveries.

“These efforts began to yield results, especially in terms of Egypt’s efforts to support the Palestinian cause and the understandings between Palestine and Israel to start developing the Gaza Marine gas field, which has been idle for years,” Kamal added.

During a Feb. 21 visit to Ramallah, Mulla agreed with energy officials in the Palestinian Authority PA to develop the Gaza Marine gas field in order to supply Palestine with natural gas and enhance cooperation between the two countries, and export part of the gas to Egypt.

Mohammad Mustafa, adviser to the Palestinian president for economic affairs, said in press statements Feb. 23 that the “attempts to extract gas have always crashed with the intransigence of the Israeli position. … We are working with Egypt to overcome this challenge and develop the Gaza Marine gas field as soon as possible.”

“Egypt’s intervention is somewhat a source of comfort for both parties (Palestine and Israel) to [better] deal with each other, and for the PA to benefit from these fields in a bid to address its grinding economic crisis,” Kamal said.

“Egypt’s efforts contribute to calming the situation and bringing about real development processes in the Gaza Strip, which includes tightened security control on the northeastern borders of Egypt, to prevent the infiltration of extremists into the country,” he added.

Gamal Qalioubi, a board member in the independent Egyptian Petroleum Association and a professor of energy at the American University in Cairo, told Al-Monitor, “The agreement between Cairo and Tel Aviv to connect the Leviathan natural gas field to LNG terminals in Egypt comes as a result of the obstacles facing Israel in developing its field. The gas field is located in a geographical area where it is difficult to build a line for production.”

“This is not to mention the high cost of this on part of Israel. Therefore, the easiest and fastest way is to connect the field to Egypt through a pipeline to the LNG stations to facilitate production,” he added.

Qalioubi believes the agreements with Israel and Palestine would contribute to the transformation of the Eastern Mediterranean Gas Forum into a regional organization with clear strategic and geopolitical impact, providing many solutions to all member states.

“The Egyptian state is seeking economic benefits, which entails political benefits that serve all countries and create a convergence of their interests and people. Egypt also seeks to become an open market for gas,” he explained.

“Egypt played this role with great intelligence and political acumen to solve many problems and calm the region, which was on the verge of economic conflict, especially in light of Turkey’s arrogance,” Qalioubi added.

Ramadan Abu al-Ula, professor of Petroleum and Energy Engineering at Pharos University in Alexandria, told Al-Monitor, “Coordination regarding the energy sector between Israel and Egypt has been ongoing for several years and is moving forward. The recent agreement achieved mutual interests for both sides and strengthens Egypt’s position in the region.”

For his part, Qalioubi added that Egypt and Israel have a great history of mutual benefit in the energy domain.

“We were the first country to export natural gas to Israel more than a decade ago. We also receive Israeli gas through the Ashkelon-Aqaba pipeline that is pumped in the Egyptian market. There are common interests between the two countries that are constantly developing,” he concluded.