Several Egyptian universities have written up dress codes for students to wide anger. 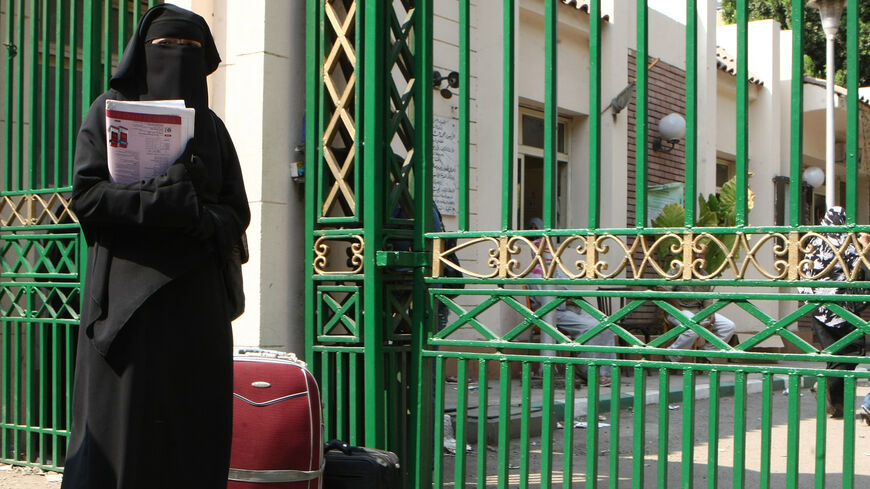 File picture dated Oct. 7, 2009, shows conservative Cairo University student wearing the niqab, a black veil which covers the face except for the eyes, outside the university dormitory, unable to enter due to new rules preventing admission to niqab wearers. - CRIS BOURONCLE/AFP via Getty Images

CAIRO — Egyptians were outraged over the recent decision by some universities in the country to require modest clothing.

Youm7 reported Sept. 24 that some universities have decided to impose new dress codes that disallow students from wearing clothes such as shorts, transparent clothing, torn garments or leggings on campus. The measures, some of which ban excessive makeup and also include restrictions for men, coincide with the start of the academic year in October.

The decision prompted angry reactions on social media, to which the Ministry of Higher Education responded in a Sept. 24 statement expressing "confidence in the students’ ethics and their ability to opt for clothes and conduct that suit their campus.”

Reactions have been mixed.

Suheri Othman, a professor of media at Cairo University, told Al-Monitor that she supports a dress code on campus, arguing that several institutions and workplaces observe similar restrictions.

“These rules and regulations, including a dress code, come in line with university norms and traditions and respect for the campus environment,” she said, stressing, “This is not a restriction on students’ liberties.”

“This a collective responsibility on the students’ part," Othman insisted. "University rules and regulations must be respected.”

In a Sept. 26 Facebook post, lawyer and human rights activist Nuhad Abu el-Qumsan denounced the move, saying that some restrictions are appropriate for workplaces depending on the nature of the profession but not for universities.

She said that the decision will be left “to the discretion” of university security guards, “who would decide which students are allowed in and which are not,” adding that the move resembles the practices of Saudi Arabia’s Commission for the Promotion of Virtue and the Prevention of Vice.

In televised statements Sept. 25, Abu el-Qumsan condemned what she called “loose and not well-defined restrictions on students.”  She did, however, welcome the idea of certain dress requirements, explaining, “There is a difference between a professional dress code and a moral code in clothing.”

She warned that the dress codes imposed are overly vague, saying, “These measures may subject some young women who wear dresses to the same situation student Habiba Tariq faced.”

In June 2021, Habiba Tariq, a sophomore Egyptian student at the Faculty of Arts at Tanta University, claimed that she was bullied and mocked by proctors during final exams over how she was dressed. The public prosecutor looked into the matter in June and closed it for lack of evidence.