Daoud Kuttab writes on the controversy over the new dress code at Al-Aqsa University in Gaza. 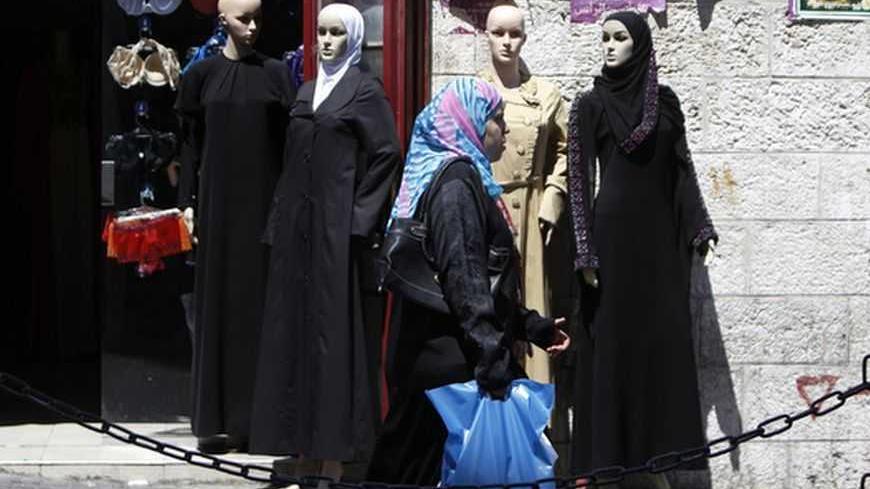 A Palestinian woman walks past a clothing store in the West Bank city of Ramallah, Sept. 4, 2012. - REUTERS/Mohamad Torokman

As if the Palestinian people didn’t have enough problems with the occupation and the political splits, we are now experiencing a new controversy, this time a social one.

The problem began last Sunday, Jan. 27, when the board of trustees of Al Aqsa University voted unanimously to impose a “dress code” on female students. The new guidelines include that in addition to the head cover (hijab), all female students must wear the jilbab — the long loose jacket-like cover that extends to the feet, thus not showing any curves in the woman’s body. While this appears to be a binding decision, the statement from the university said that no punishment will be given to those refusing to comply with the dress-code order, but that attempts to change such students' behavior will be applied through “persuasion” rather than punishment.

Ramallah-based Palestinian media joined in the criticism with a quote from a third-year student named Tahrir, who said that had she wanted to abide by the Islamic dress code, she would have gone to the more conservative Islamic University.

This exchange actually reveals what many call the Islamization or the "Hamasization" of Palestinian institutions in Gaza. While the Islamic University was always closely affiliated with the Islamist movement, Al Aqsa University was known as less Islamic and closer to the PLO’s nationalist political line. When the Ramallah leadership lost control of Gaza, then-university president Ali Zeidan was among those pro-Fatah leaders who left Gaza for Ramallah. He is now the minister of transportation in the Salam Fayyad government. Agha, who was appointed by Hamas to replace Zeidan, was delegated the responsibility of this so-called Islamization process. No doubt the process was part of a campaign pushed by the Al Awqaf Ministry in the Hamas government.

For its part, the PLO has also added its voice against the attempt to introduce a conservative dress code.

The Cultural and Information Department of the PLO, headed by Hanan Ashrawi, slammed the university’s decision as being Taliban-like. The statement said that the decision violates both human rights and Islamic teachings.

The PLO said that the decision is also against the university's mission, which was founded to develop society, and condemned the verbal and physical violence reportedly faced by female students for not adhering to the dress code.

It is hard to discern whether the eruption of this social problem is connected to attempts to reconcile the secular PLO and the religious Hamas. Some expect that once such a reconciliation is carried out and followed by elections, the social power of the Islamists will weaken, prompting a push to establish Islamic cultural mores that can’t be reversed.

Others predict that the pressure exerted on the university's board of trustees reflects the divide within Hamas, which is worried about losing power as reconciliation efforts move ahead. For this school of thought, the dress-code decision was an attempt to scuttle the reconciliation talks by creating a side issue that they knew will surely elicit a strong response from less-religious circles in Gaza and the PLO-dominated powers in Ramallah.

Whatever the reason, this social controversy will add to an ever-growing list of problems that the leaders of Hamas and the PLO will have to confront as they move into the implementation phase of the reconciliation process.