The decision to ban student movements affiliated with political parties at universities in Egypt was met with support, as they prevent clashes on campus, and criticized because the decision is deemed illegal. 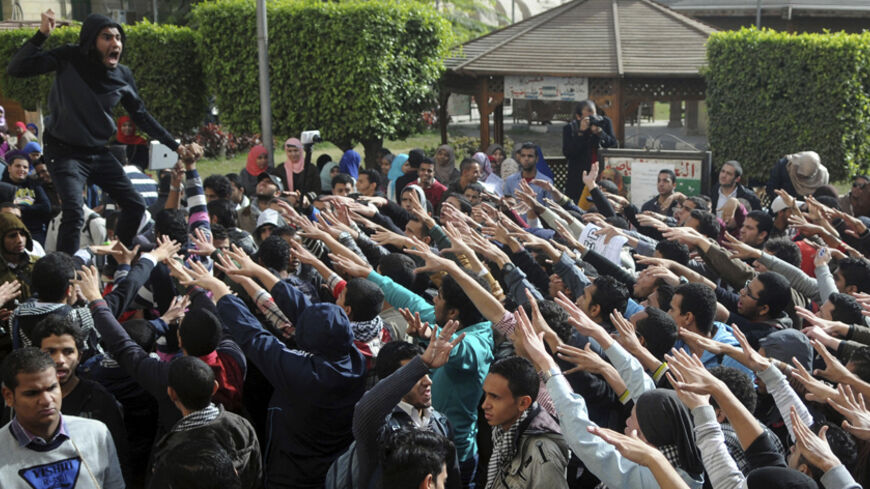 Student movements still represent a thorn in the flesh of the political regime in Egypt, especially after the violent, bloody clashes between students and security forces that occurred at universities in 2013. This is why universities in Egypt felt they had no other option than to ban student groups formed on partisan or political bases. However, the real effects of this decision on the student movements remain unclear.

After the Egyptian government decided to delay the school year for a month, Gaber Nasser, president of Cairo University, announced that the school had decided to dissolve student groups supporting political movements or parties to prevent all sorts of partisan political activities on campus, which affect the educational process. Many universities, including Cairo University, complied with the ban, which was a heavy blow for all political parties and factions — whether political or religious — that were believed to be supported by student groups.

The regulations stipulate that a group shall only be dissolved following the decision of its leader, its board of directors or two-thirds of the general assembly’s members. It is illegal for university presidents to dissolve student groups.

It's difficult to tell which groups are affiliated with political parties, since all groups are registered with their names and objectives, and not their political activities. Thus, Adel Abdul Ghaffar, Cairo University spokesman, said that it is easy to recognize the politically-affiliated groups through their seminars and outfits. The university's deans then review a group’s status and the Youth Welfare Department has the authority to dissolve it.

In an interview with Al-Monitor, Abdul Ghaffar defended the ban, saying: “The implementation of this decision will attenuate the clashes between students. Such a decision will help rationalize their behavior on campus.”

He differentiates between partisan work on the one hand, and political work and public affairs on the other, emphasizing that public affairs and all sorts of political subjects are allowed to be discussed on campus.

Abdul Ghaffar believes that the student groups that are formed on a partisan basis are advertising on behalf of the parties they are affiliated with. He rejects such acts, especially since the parliamentary elections are approaching.

However, Hisham Ashraf, president of the student union at Cairo University, confirmed that this decision would be difficult to execute. “The decision to ban student groups will be difficult to officially implement, since there are groups whose members are known to be politically affiliated, but they organize several nonpolitical activities,” he said.

This is why Ashraf described the decision as “unsystematic” and proof that the university is not fully aware of student life and its various activities.

It seems that the purpose of this ban is to scale the Muslim Brotherhood’s activities and completely block them, especially since the Brotherhood has a long history in student groups.

In this context, Mahmoud Jamal, a student at the faculty of engineering at Ain Shams University, who is affiliated with the banned Muslim Brotherhood, told Al-Monitor that the regime is not only hostile to the Brotherhood but also to all student movements. He asked, “Are there more severe and horrible procedures than using live bullets against students and arresting them, as was the case last year?” Jamal stressed that the protests, which he described as peaceful, will continue, but will take another turn as a result of the security forces' intervention.

Ahmed Abed Rabbu, a political science professor at Cairo University, stated that the decision goes beyond targeting Muslim Brotherhood-affiliated students. He explained that the Brotherhood indirectly benefits from such decisions, which leads to more government opponents and represents a repetition of the mistakes of Hosni Mubarak’s regime.

Abed Rabbu denounced the implementation of this decision, since university students are no longer adolescents and cannot be forced to refrain from political activity. In his interview with Al-Monitor, he showed surprise that the Egyptian universities adopted procedures that presumably help secure the university, such as building higher fences, appointing deans and postponing courses. According to Abed Rabbu, these procedures will ultimately lead to clashes and more tension.

In an interview with Al-Monitor, Ali Abdul Aziz, vice president of Ain ​​Shams University, denounced the fierce attack on the ban decision. He refused to have student groups turn into partisan political offices within the university, stressing that on-campus political activity is prohibited at Western universities.

“Universities have an educational objective, which does not include on-campus political activity,” Abdul Aziz said, adding, “The ban decision and the legal procedures are still being studied and will only be taken following the approval of all parties involved in the university.”

A student, affiliated with the Strong Egypt Party students’ office at one of the Egyptian universities and who preferred to remain anonymous, said that the decision aims at fighting the revolution. He told Al-Monitor the state knows that controlling universities means controlling the revolution. “The decision is invalid,” he stated, stressing that youth will continue their activities and projects. “They just can’t dismiss more than a quarter of university students,” he said.

Student Ahmed Shaaban at the faculty of commerce at Cairo University, who is affiliated with the April 6 Youth Movement, said that the movement’s youth wanted to form university groups after the January 25 Revolution. He said, “Universities refused [their request] once they knew that they were members of the movement, despite the fact that the groups will not be political movements.”

He added: “Some people even told us, ‘Even if you were the last people on earth, we will not let you form university groups. … The decision aims at restricting students’ activity.” He explained that students have become accustomed to scenes of blood, violence and arrest, and will not give up easily. He also noted that the government will not be able to implement this decision, recalling the decision to ban the April 6 [Youth] Movement. “Despite the decision to ban the movement, we are working on the ground and we will keep doing so.”

Tightening the security noose on students in universities — places that constitute a melting pot of religious and political views — will fuel on-campus clashes and will likely aggravate conflicts and polarization, especially since the clashes between Egyptian university students and the ruling power reached their peak and most security solutions adopted by the regimes have failed.