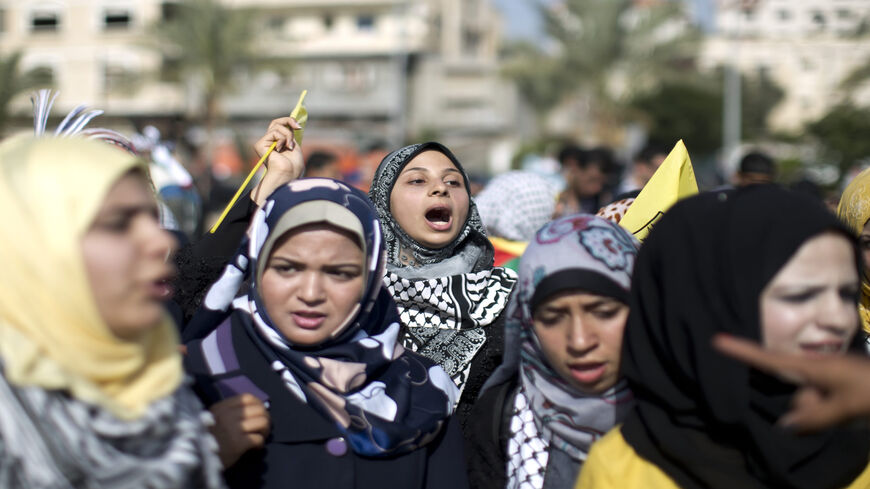 The university's administration as well as rights organizations widely condemned and rejected the attack, which triggered violent clashes between the security officers and the students.

Al-Azhar University, which was established in 1991, is considered one of the major Palestinian universities fully affiliated with the Fatah movement, Hamas’ main rival.

In general, Fatah supporters send their children to Al-Azhar University because of the financial support they receive, such as grants and loans. The chairman of the university’s board of trustees is usually appointed directly by President Mahmoud Abbas. The chairman then appoints members of the board who ultimately decide on who will be the university's president.

The Palestinian keffiyeh is a black and white scarf attributed to late Palestinian President Yasser Arafat. After his death in 2004, the keffiyeh became a national symbol. It is worn beyond the Arab region, and it gained popularity among activists expressing solidarity with the Palestinians.

Since the keffiyeh has represented the long historical struggle, attacking it is seen as an insult to all Palestinians and their resistance symbols.

Fatah described the Hamas attack on students and employees at Al-Azhar University as unethical. In a press statement released the day of the attack, the movement said the attack was a crime against symbols of the Palestinian national identity in general, and reflects Hamas' inclination to exclusion, which threatens national ideology, principles and heritage.

Even members of the university's security personnel were attacked as they tried to intervene to stop the clashes between police and students, according to the administration statement.

The Palestinian Center for Human Rights also condemned the attack on Al-Azhar University students, calling for an investigation into this incident and for taking measures to prevent the recurrence of such incidents that threaten the educational process.

Al Mezan Center for Human Rights also denounced the police’s banning of the keffiyeh, storming of Al-Azhar University campus in Gaza and assaulting students. The center said that the police would not intervene on a university campus unless the administration officially requests it. This is a long-standing norm and parties respect it, it stressed, calling for the need to keep universities out of political problems and disputes.

The Hamas police denied in press statements all these incidents, claiming the reports were fabricated rumors demonizing police officers.

The police said the facts were distorted, with the aim to achieve certain political goals.

Following intervention from mediators, the Fatah Youth Movement, Fatah’s student bloc at the university, and Hamas’ Islamic Bloc issued a joint statement Sept. 22, in which they said that it was agreed to overcome the dispute between all parties, and based on the agreement to release all university students who were detained following the incident.

Meanwhile, Palestinian activists launched the Arabic hashtag that translates into “Keffiyeh Is My Identity” to protest the police’s assault on the Al-Azhar University students. The hashtag trended on social media in Palestine, and thousands of social media users engaged with it, underlining the strong symbolism of the keffiyeh for the Palestinians and their history of struggle.

Palestinian activists warned against being dragged into partisan issues, which would widen the rift in the Palestinian street and cement the Palestinian political division that has been ongoing for 15 years.

Kamel Abdo, a 20-year-old Al-Azhar University student, expressed his deep disgruntlement with the behavior of the Hamas police for attacking students on campus. He was shocked at what happened since wearing the keffiyeh does not affect security, but the police saw it as an incitement to violence from a certain party.

Saleh Raafat, member of the Fatah Central Committee, told Al-Monitor, “What the Hamas police have done against the students of Al-Azhar University is immoral, because the Palestinian keffiyeh is a symbol of every Palestinian fighter, and it is not specific to Fatah alone.”

He said, “University students wear the keffiyeh out of love for the late Yasser Arafat and the history of the Fatah movement. It is unreasonable for that to cause controversy and partisan bias.”

“Since Hamas took control of the Gaza Strip in 2007, it has continued to suppress and persecute supporters of the Fatah movement and obstruct their activities,” he said, calling on Hamas to reconsider its behavior with the Palestinian people, and immediately retract the pressure it is exerting on Gaza’s citizens.