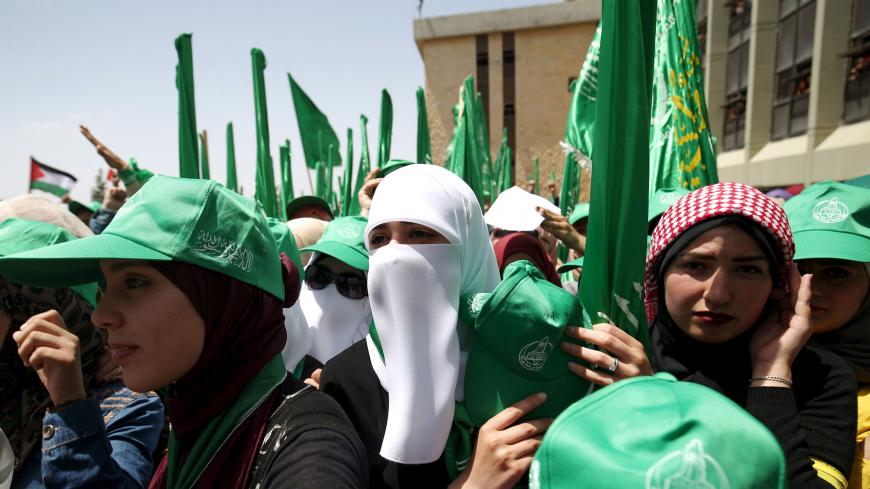 Palestinian students supporting Hamas take part in a rally during an election campaign for the student council at the Birzeit University in Ramallah, West Bank, April 26, 2016.

RAMALLAH, West Bank — Birzeit University suspended all activities recently after a brawl erupted between the student blocs of Hamas and Fatah.

The targeted student was leaving the university with his friends when security forces intercepted them. All of the students managed to escape and hide inside the university. Gunshots were reported, but no one was injured.

Enraged by what had just happened, the students started yelling at security personnel and hurling insults about the PA — which didn’t sit well with members of Fatah's student party, Shabiba. An altercation developed into a brawl despite the university guards’ attempts to contain the situation, which required an intervention by the university's administration. The school canceled courses for the next day, and classes resumed Dec. 19.

Aziz Shwayka, the school's assistant president, urged all parties to “stop disrupting academic life and consider the university space a sacred one that is not to be desecrated.” He told Al-Monitor, "We have no contact with the Palestinian security apparatuses and have no knowledge of the individuals who attempted to arrest the students."

University guards had tried to defuse the situation, according to one such guard who asked for anonymity as he is not allowed to speak to the media. “We tried to maintain order inside the university during the brawl,” he told Al-Monitor. “A number of guards suffered injuries during a clash as they were trying to end the dispute.”

Shwayka said, “The university guards are not armed and don't have the tools to deal with cases of violence." He added, “Their responsibility is to maintain order at the university through peaceful means." Because of this, outside security forces should stay off the campus and not interfere with student affairs, Shwayka said.

Al-Monitor attempted to speak with Palestinian security, which refused to comment.

Following the 2007 Palestinian division between the Hamas and Fatah political parties, Hamas' student bloc was persecuted in the West Bank; its members were pursued and their university activities banned. But in 2012, following a 10-day sit-in organized by the bloc's students inside Birzeit University, the sides reached an agreement that unshackled the students' work and put an end — at that time — to the harassment. Under the agreement, security apparatuses and the Ministry of Interior pledged to stop all forms of persecution over students' political affiliations and university activism. That agreement, however, is being violated.

Islamic Bloc members at West Bank universities say they are constantly hunted by Palestinian security due to the students' school activities, which include organizing artistic, cultural, student and academic exhibitions designed to raise money from students.

Yet students who are arrested are often charged with serious crimes such as sectarian violence, libel, defamation, or even receiving funds from illicit parties or possessing weapons. Hamza Abu Qaraa, the Islamic Bloc's coordinator at Birzeit, told Al-Monitor these accusations are mostly fabricated, so courts issue orders to release the students. Although security officials often stall for a few days, they do eventually release most of the students.

“Security apparatuses try to fabricate charges against the Islamic Bloc students to put them off getting involved with it,” he said.

Abu Qaraa himself was arrested June 27 by PA intelligence affiliates. “I left the university heading for a gas station where I was surprised by an intelligence vehicle. The officers got out of the car, introduced themselves and asked me to surrender myself," he told Al-Monitor.

He got out of his car and tried to flee. “I went back to the university to hide there, but another intelligence vehicle was waiting for me on the other side. They started shooting in the air. This is when I stopped. Subsequently, they caught me, handcuffed me and beat me in the street. They took me to the [PA police intelligence] headquarters in Ramallah,” Abu Qaraa said.

Abu Qaraa said he was held for 19 days, even though he was granted a release order after the fifth day by the judge handling his case in Ramallah.

More than 400 students from various West Bank universities have been arrested during the school year, Abu Qaraa said, though exact figures aren't available. He said about 24 Birzeit students have been arrested since May when the Islamic Bloc won student council elections for the fourth year in a row.

The Islamic Bloc accuses PA security of trying to disrupt its work by persecuting its members. “The security apparatus’ interference with student life was the cause of the recent events at Birzeit University,” Abu Qaraa said, adding, “They make sure [they undermine] the Islamic Bloc’s [activities]. This is the case at all [West Bank] universities."

“Security apparatuses document any event or activity organized by the [Islamic] Bloc at the university, be it service-centered, academic or union-related, to subsequently pursue the people involved,” he said.

However, Sadek al-Khdour, spokesperson for the Palestinian Ministry of Education and Higher Education, told Al-Monitor, “The ministry distances higher education institutions from any divergence of viewpoints or disputes to preserve the educational process.”

Khdour denied that any PA security forces were involved in the brawl.

Asked whether the ministry or any affiliated personnel were connected to attempts to abduct students, Khdour said, “Security apparatuses might have some ulterior goals and motives, but we won’t comment about what happened without knowing the reasons.”

With the Fatah-Hamas split entering its 12th year, the fallout — including student persecution — is evident in both the West Bank and Gaza Strip. Manifestations of the rivalry correlate with each progressive or negative development between the parties.