Lebanon's struggling households are finding it increasingly challenging to afford school lunches for their children due to financial constraints. 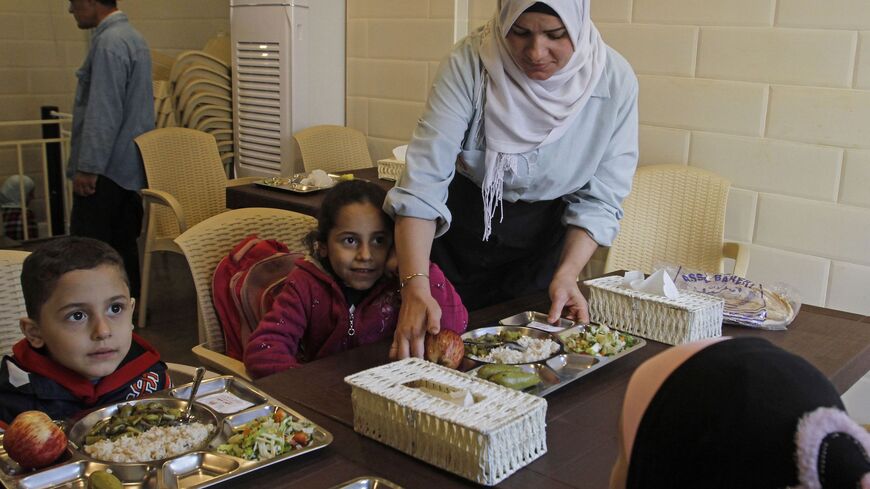 A volunteer serves food to needy children at a kitchen set up by charity groups in Lebanon's southern city of Sidon on Dec. 7, 2019. - MAHMOUD ZAYYAT/AFP via Getty Images

BEIRUT — Cash-strapped Lebanese families are struggling to feed their children at home and in schools, and many have to choose between heating or food.

Many families are skipping meals and borrowing money to make ends meet, resulting in a greater dependence on food-distributing charities.

Social activists have also been distributing free meals for families to send to school with their children, targeting the most vulnerable.

Social psychologist Nasreen Najm has been working on securing meals for students at several schools in Beirut, which she distributes on a weekly basis. She told Al-Monitor, “After hearing about the situation, I visited several schools to assess the needs and decided to launch a campaign that can help those who are from low-income households.”

Najm noted that there was a clear lack of nutrition in meals children take to school, with some bringing as little as a plain sandwich with just a bottle of water.

She targeted children whose families are financially unstable, providing them with a sandwich, snack, fruit and drink.

Nutrition is vital for a healthy child, and food insecurity is negatively interfering with the health and development of many children in the country.

Caroline Beaini, a child nutritionist based in Lebanon, told Al-Monitor, “It’s disheartening and shocking to see children going to school with such a small amount of food in their lunchbox.”

The situation worries Beaini, who noted that the lack of food impacts the child’s development both physically and mentally.

“Lack of food causes anger, anxiety and depression, and frequent tantrums because it directly impacts the nerve system and the functioning of the child’s brain,” Beaini said.

Beaini advises families who are on a tight budget to focus on including carbohydrates, a source of protein such as raw nuts or chickpeas, and a serving of vegetables or fruit.

Schools are paying more attention to lunchboxes in order to avoid jealousy and comparisons among students, according to Beaini.

“The school that my kid attends now has a policy of instructing parents on what to give their child to take to school to make it fair for everyone,” says Beaini.

Families are pushed to the brink and there is only so much they can do with rising costs.

Food prices have increased rapidly in recent months, and more families are skipping meals and trying to cook budget-friendly meals or are going into debt.