Gazan restaurant owner Abdallah Lafi went to school hungry many times, and now he has launched a campaign to help other children and families get a meal. 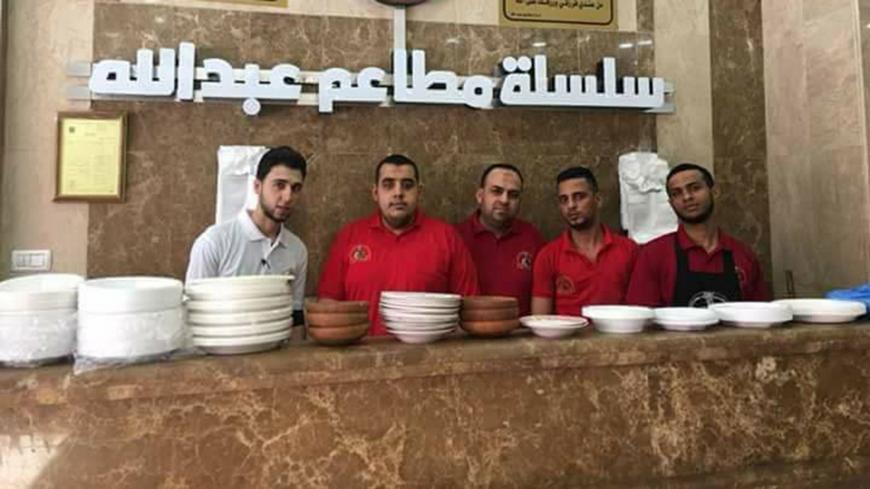 GAZA CITY, Gaza Strip — In the Gaza Strip, where 80% of the residents rely on humanitarian assistance to survive, various civil initiatives help the poor by providing them with food and medical treatment or writing off their debts. One of the initiatives that has been running for four years now is “Faker Bghayrak” ("Think of Others"), a youth initiative that provides food and medical treatment to the sick. A more recent campaign — “Sameh, Toujar” — encourages merchants to drop the debts of Gazans who cannot pay.

A recent campaign by the Abdallah Restaurant chain offers Gazans a free breakfast and dinner every day. The chain's three restaurants — in Rimal neighborhood, west of Gaza City; in Sabra neighborhood, central Gaza; and al-Zaytun neighborhood, south of Gaza City — are part of the initiative designed to feed 100 poor families daily.

“Ever since we started the campaign, many families that do not have the means to buy food have come to our restaurants for breakfast or dinner to be served beans, falafel and chickpeas. We only serve these two meals,” Atta, a waiter at the restaurant in Sabra, told Al-Monitor.

Some students who do not have money to buy sandwiches come to Abdallah Restaurant before school to get a falafel sandwich and a small salad. “Even before the campaign started we used to give children falafel sandwiches for free on their way to school in the morning. It only costs us two falafel balls and a loaf of bread. The children really appreciate it,” Atta added.

Essam Jouda, 9, stopped by Abdallah’s on his way to school and grabbed a sandwich from Atta’s hand. “I am the youngest of six children. My father used to work in construction but stopped working a long time ago. When we have any leftover food, my mother makes me a sandwich but sometimes I go to school without having breakfast,” he told Al-Monitor.

The owner of Abdallah Restaurant chain, Abdallah Lafi, had worked in restaurants for 15 years when he opened his own beans and falafel restaurant when he was in his late 20s.

He told Al-Monitor, “My family was poor so I had to work to help out. Before completely dropping out of school at the age of 15, I remember going to class without breakfast. When I first worked at a falafel restaurant, I used to pay for the sandwich I made and eat there. That's why I cannot bear seeing small children standing by the restaurant door, unable to buy a 1 shekel sandwich, which is only about 28 cents.”

Lafi’s hard work allowed him to save enough money to open his first restaurant, where he served falafel, beans, chickpeas and chickpea fatteh at low prices. He quickly got regular customers and was able to open two more restaurants within 10 years.

“Children would come up to me or the restaurant staff on their way to or from school — at sunrise and sometimes after sunset — asking for sandwiches. Once a young mother approached me and said that her children were craving chickpea fatteh, which is a dish made out of bread crumbs and chickpeas topped with almonds and sometimes minced meat, but she could not afford to buy it for them. They only cost 5 shekels — or about $1.40 — but she did not have the money,” Lafi noted.

This specific incident was the reason for launching the campaign. “I worked out my daily income and weekly earnings and found that I could provide breakfast and dinner for 100 poor families a week at 5 shekels for each meal. I announced the campaign in my three restaurants to our customers, and we have been providing food for poor families for about five months now. The number of people in need who come to the three locations has gradually increased since then,” he said.

In March, Lafi asked his friends and customers working in the media to promote the campaign in order to encourage other restaurants to do the same.

“The number of people coming in for free food has continued to rise, given the ongoing Israeli blockade and worsening financial conditions in the Gaza Strip. This is not to mention the never-ending repercussions of the sanctions imposed by the Palestinian Authority such as salary cuts [for public servants] and [mandatory] early retirement,” he added.

Lafi does not receive any assistance or support for his campaign from any governmental or charitable organizations in Gaza. “We did not ask for support from anyone and no governmental or civil institution has even offered to help. However, some Palestinians who live abroad have contacted me directly to help cover the cost of the food. I think I will accept their assistance since I would not want to disappoint anyone, and the number of people in need coming in keeps on rising,” he said.

The success of the campaign launched by Abdallah Restaurant reveals the poverty suffered by Gazan families.