How some Egyptian youths are addressing food insecurity

Egyptian students launch an initiative that allows poor citizens to buy sandwiches with the money left by paying customers. 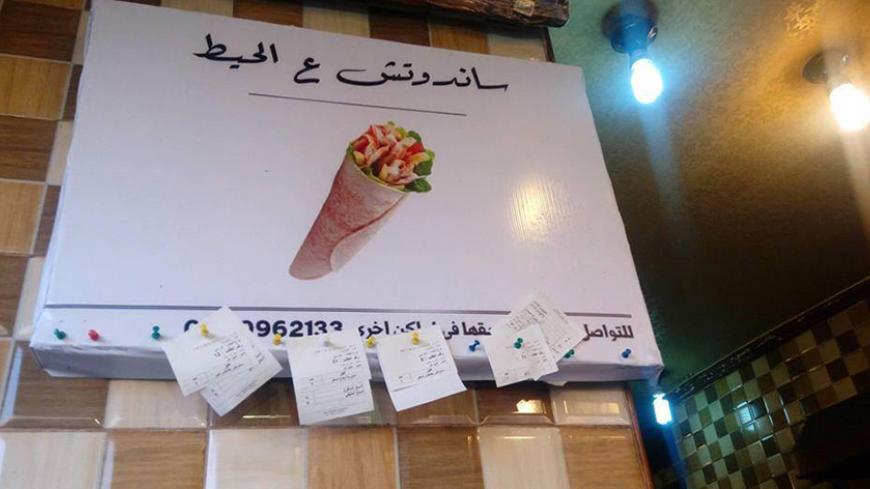 A sign for the charity initiative "Sandwich on the Wall" is seen at a restaurant taking part in the project; image uploaded March 18, 2017. - Facebook/Eng Mai

In a modest restaurant on the outskirts of Cairo, paid receipts are pinned to one of the walls, allowing hungry people who have no money to use them to order a sandwich.

The restaurant has joined the "Sandwich on the Wall" initiative that was launched by three young Egyptian students to provide poor people with free food. The idea is that a customer buys a sandwich and pays for another one; a hungry person who can't afford a sandwich can take the receipt from the wall to pay for a meal.

Several restaurants in El-Obour city near Cairo have embraced the initiative, which is set to expand to other restaurants in Cairo during the summer.

“We want to help poor people in Egypt, not only by allowing them to eat for free but also for them to have their meals with dignity,” said Mohamed Magdy, 16, the brains behind the initiative.

The need for free food in Egypt has become particularly acute amid the difficult economic situation. Egypt’s urban consumer inflation rose for the fifth consecutive month in March to reach an annual 30.9%, according to data released by the state-run Central Agency for Public Mobilization and Statistics (CAPMAS).

On Nov. 3, Egypt abandoned its currency peg of 8.8 pounds to the US dollar and took a raft of economic reform measures to secure a $12 billion loan program from the International Monetary Fund. The Central Bank of Egypt accompanied the November float with a 3% interest rate hike to fight price pressure, but inflation is expected to keep climbing as the government pushes on with economic reforms, including fuel subsidy cuts. It now takes 18 Egyptian pounds to buy a dollar.

To cope with the price hikes, many Egyptians have started to rationalize their spending and rely on locally made products. However, there are still many people who do not have enough money to buy food.

Magdy told Al-Monitor, “The idea dawned on me one day when I sat with my friend at a restaurant and we saw a customer order a sandwich and ask the waiter to cut it in half. The customer took one half and gave the other half to a poor person who was standing outside the restaurant.”

Magdy said he and his friends were encouraged when several restaurants showed interest in the idea and agreed to cooperate.

An advertising agency also contacted the founders of the initiative and displayed 10 banners and distributed 1,000 flyers free of charge, to raise awareness among the public about the importance of taking care of poor people and the way they could help.

“Our main aim is to put an end to hunger in Egypt. We know that it is tough, but we will do our best to meet this end,” Mohamed Essam, one of the founders of the initiative, said.

Essam, who is still in secondary school, said that he and his peers are now hoping that a large nonprofit organization would adopt their initiative and enable them to reach as many poor people as possible. “We also hope that the idea is implemented in every restaurant in the country,” he said.

Eman Ashraf, a volunteer in one of the country’s charity organizations, said that such initiatives raise awareness among people from the upper and middle classes about their social responsibility to help people from lower segments. “Part of the poverty problem in Egypt could be solved if the rich took it upon themselves to get the poor out of poverty and help them have a dignified life,” she told Al-Monitor.

Before the “Sandwich on the Wall” initiative was launched, a restaurant in the upscale Cairo district of Dokki was a pioneer in providing free food to the needy for an hour a day. The restaurant offers poor customers 20 Egyptian pounds ($1.10) worth of sandwiches for free between 5-6 p.m. every day.

The restaurant also garnered donations worth thousands of dollars from Egyptian celebrities, including singer Sherine and TV host Amr Adeeb.

“In such a critical economic period, we should have more of these restaurants to provide the poor with one of their basic needs — food,” Ashraf said.