None of the many possible outcomes of next week's vote offer real hope for a stable, majority-supported new government in Israel. 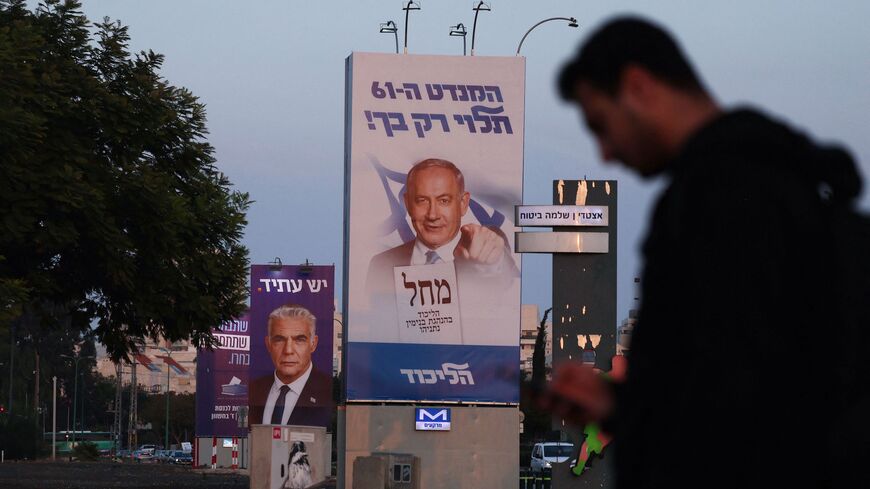 A picture shows a electoral banner for the Likud party depicting its leader, former Prime Minister Benjamin Netanyahu, reading in Hebrew "The 61st mandate depends only on you" in Tel Aviv on Oct. 27, 2022, ahead of the November general elections. - AHMAD GHARABLI/AFP via Getty Images

As Israelis prepare to vote in the country’s fifth elections in less than four years, Israel’s future hangs in the balance. Will former Prime Minister Benjamin Netanyahu achieve the 61-seat Knesset majority he needs for his political comeback and reshape the country with sweeping reforms? Or will his rivals once again block him and his allies?

This round is more complex than the four previous since April 2019, with a near tie between the pro- and anti-Netanyahu blocs making predictions exceedingly difficult.

The possibilities for a governing coalition are vast. Anything could happen, even a unity government between Netanyahu and caretaker Prime Minister Yair Lapid, despite vehement denials by all sides.

Join Ben Caspit on Thursday, Nov. 3 for a webinar to break down the election results as well as the domestic and international implications. Register for free here.

Netanyahu has been assuring his supporters that his Likud party and its allied nationalist and ultra-Orthodox parties are on the verge of victory. An average of the latest polls gives them slightly more than 60 seats in the 120-seat legislature, not quite enough to cross the bar. Still, the prospect of failure to reach his goal for the fifth time must be privately daunting.

If he does win 61 seats, will Netanyahu follow through on forming a full-fledged right-wing government with his two ultranationalist allies, Religious Zionism party leader Bezalel Smotrich and his running mate, Jewish Power chair Itamar Ben-Gvir holding him politically hostage? Is he prepared to internationally isolate Israel and risk its major diplomatic achievements in the region?

The American administration, Emirati leadership and many others have been warning him not to do what his family is reportedly urging him toward. Previously Netanyahu would never have considered such an option, but his 2019 indictment for corruption have left him a pale imitation of the leader he once was as he battles to regain power and introduce constitutional and legal reforms that would halt his trial.

Netanyahu associates, among them senior Knesset members, have begun suggesting Lapid join him in a unity government if Netanyahu wins 61 seats. They discount the idea of a unity government with Defense Minister Benny Gantz because there is no chance Gantz would enter such a political adventure with Netanyahu for a second time. Gantz had taken up Netanyahu on a similar offer after the 2020 elections only for Netanyahu to renege on all his promises and nearly sink Gantz’s political career.

From Lapid’s perspective, an opportunity to stay would be appealing. Meanwhile, Netanyahu’s trial would proceed to its conclusion and he'd retain the premiership in the case of conviction or plea bargain — though  in Israeli politics, anything could happen in two years.

That being said, Lapid is vanishingly unlikely to agree to such a union. He achieved his current position by resisting a similar offer two years ago, letting Gantz join Netanyahu instead only to be ground down by Netanyahu’s machinations. Lapid has played a long game and flourished. Unlike Netanyahu and Gantz, he does not seem obsessed with power.

The Gantz option is still feasible, with the ultra-Orthodox United Torah Judaism party adamantly opposed to a sixth round of elections if the Nov. 1 results are once again inconclusive. Party heads have indicated that if Netanyahu failed to win a majority for the bloc, they would examine a possible alliance with Gantz. Such an outcome would create pressure for Lapid to join them and split the prime minister’s job with Gantz. In this scenario, Gantz would serve as premier for the first two years of the term, giving the ultra-Orthodox time to accept Lapid and his anti-clerical views. But Lapid is unlikely to agree and far more likely to take his chances with another election as an incumbent.

Yet another scenario under discussion in the political arena is a revolt both in the ranks of the Likud and of the ultra-Orthodox, shifting support for Netanyahu to a different Likud candidate, someone like former Knesset speaker Yariv Levin.

Such a move is constitutionally feasible and might even win the support of former Likud stalwart and current Gantz running mate Justice Minister Gideon Saar as well as senior Likud members. Netanyahu would be forced to give up his comeback ambitions. Following his failure in previous rounds, leading ultra-Orthodox figures such a UTJ chair Moshe Gafni asked Netanyahu whether he would agree to cede his position to a different Likud politician to enable the formation of a right-wing and ultra-Orthodox government. Netanyahu quashed the idea, but would he be able to withstand such pressure this time?

The upcoming balloting will be determined by turnout. A 50% Arab Israeli turnout would greatly reduce Netanyahu’s chances of a majority. Current estimates of the Arab turnout range from 46% to 48%. As for the pro- and anti-Netanyahu blocs, will either turn out in droves, as he famously predicted of the Arab sector?

Another factor is external meddling in the elections. The Shin Bet security agency has already blocked one attempt at cyber interference by Russian hackers.

“This was not a government-sponsored hack,” a senior Israeli intelligence source told Al-Monitor on condition of anonymity. “These were Russian hackers and the attack was not powerful. We hope this was a one-off that does not develop into something more serious, although we would be able to block that, too.”