In a new display of military power, the Houthis used helicopters for the first time to commemorate the 8th anniversary of their capture of Sanaa. 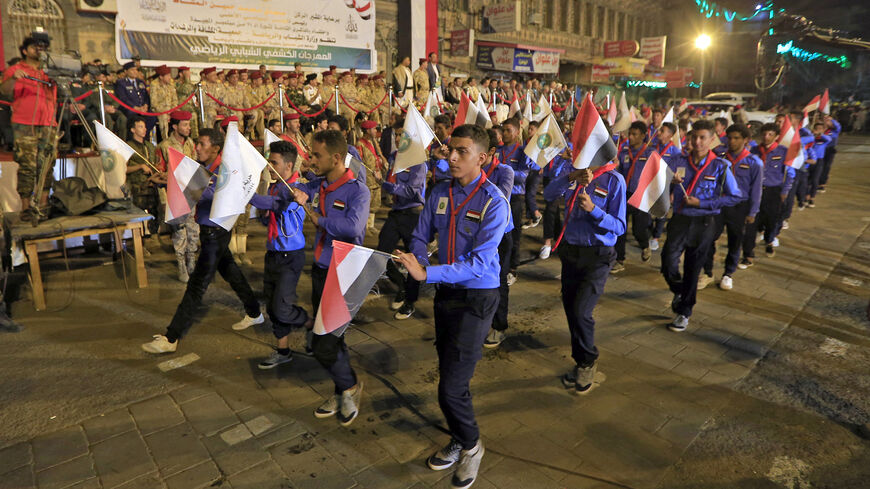 SANAA, Yemen — Helicopters were flying at a low altitude in the sky of Sanaa Sept. 21, a scene not witnessed by Yemenis since 2015. The helicopters, this time, were not on a military mission or transferring soldiers from one place to another; they dropped small packages containing chocolate, raisins and leaflets.

The Iran-allied Houthi group operated the helicopters to commemorate the eighth anniversary of their takeover of Sanaa. On Sept. 21, 2014, Sanaa fell to the group's fighters who were armed with Kalashnikovs and mortar shells. Today, they fly helicopters.

While the display of the helicopters uplifted the Houthi supporters at the military and civilian levels, it has deepened anger and despair among the anti-Houthi community in Yemen. The latest parade shows that the war has not exhausted the Houthis; instead, it has developed its military capabilities.

Mohammed Ali, a soldier who participated in the Houthi-organized parade in Al-Sabeen Street, told Al-Monitor that the magnitude of the military force on this anniversary celebration was unprecedented.

"The number of soldiers, armored vehicles, missiles and police vehicles on the eighth anniversary was massive. I have not seen a parade like this in Yemen," said Ali, who has been fighting for the Houthi group since 2017. "The best part of the parade was the helicopters in city's sky."

The Houthis' abrupt rise to power in Sanaa in 2014-15 plunged Yemen into a destructive civil war. It also invited a foreign military intervention led by Saudi Arabia and the United Arab Emirates. Thousands of airstrikes have hit the country over the last seven years, leaving a tragic impact on civilians and civilian infrastructure. However, the Houthis survived and flourished at the political and military levels, and they are prepared for a renewed war once the ongoing United Nations-sponsored truce ends without a renewal.

Celebrating what he describes as the Sept. 21 revolution, Abdul-Malek al-Houthi, the Houthi movement's chief, delivered a long speech explaining achievements and challenges since 2014.

He said one of the major achievements is the development of the military industry in Yemen. "Our country manufactures everything from infantry weapons to medium weapons to advanced and long-range weapons." He specifically listed what weapons Yemen can produce, including pistols, Kalashnikovs, cannons, drones and ballistic missiles of various ranges.

He continued, "The future of the industry at the military and civil levels in Yemen is promising, as Yemen is manufacturing what many countries are unable to produce."

According to Houthi, the war has not ended, which entails constant preparation. He noted, "The aggression is still ongoing and the war is not over. They [Saudi-led Arab coalition] did not lift their siege and did not stop their aggression. We are only in a temporary truce."

The current UN-sponsored cease-fire between Yemen's beleaguered internationally recognized government and the Houthis will expire Oct. 2. The latter's massive military parade on the eighth anniversary of their capture of Sanaa serves as a warning signal that they are highly prepared for a new cycle of conflict with a better military might.

The Houthis' military success since their seizure of Sanaa has earned them substantial popular support. Fuad Qasem, resident of Sanaa, remembers when the Houthi fighters entered the capital in September 2014 and how much he detested their spread in the city. Today, his perception of the rebel group has changed.

"The Houthis were called a militia, but their actions and political and military performance have made them like a state. That is what convinced me to support them, " he said. Expressing his views on the Houthi parade, Qasem told Al-Monitor, "When I saw the helicopters in the sky in Sanaa Sept. 21, I felt that the Houthis have the potential to subdue their local opponents, and this is only a matter of time."

On Sept. 1, the Houthi group organized a huge military parade in the port city of Hodeida, a move that sparked the reaction of the UN. The UN Mission to Support Hodeida Agreement stated it was "deeply concerned" by such an action.

While some citizens in Sanaa and across Yemen take pride in the Houthi display of power, particularly on Sept. 21, others view this day as the bleakest in decades.

Murad, a schoolteacher in Sanaa, told Al-Monitor that the Houthis are good at war and their sole concern is the accumulation of arms to oppress the people.

"Since the Houthi coup in September 2014, Yemen has been experiencing a tragic humanitarian catastrophe. The Houthis have set the country back 60 years and are now leading their followers to an unknown future. Sanaa's fall to them was a jump to the dark past," said Murad.

In 1962, a revolution broke out in Yemen, toppling the Imamate rule and establishing the republican system. Today, the Houthi leadership views what happened in 1962 as a coup, and they diligently work to restore the Imamate ruling approach, where the leader should only belong to the dynasty of the Prophet Muhammad. The critics and the opponents of the movement's dogma cannot feel safe in areas under the rebels' control.

Geneva-based SAM Organization for Rights and Liberties said that the Houthis have confiscated 3,000 houses and companies since their September 2014 takeover of Sanaa. In addition, the group has blown up 950 houses and foundations on the grounds of sectarian and political disagreements.

The organization said in a statement, "The Houthi coup against the state institutions on Sept. 21, 2014, opened the door wide to evil and plunged the country into a state of chaos, insecurity, denial of rights and violation of the rights of individuals in a serious and unprecedented manner in modern history."

Yemen's security, education, media, health care and economy have been in tatters since 2014. The only thing that blossomed was the Houthi military power, which foretells a prolonged war or lasting Houthi dominance.