Civilians in Sanaa feel frustrated at the Riyadh Agreement recently signed between the main partners of the Saudi-led coalition that will unite them against the Houthis. 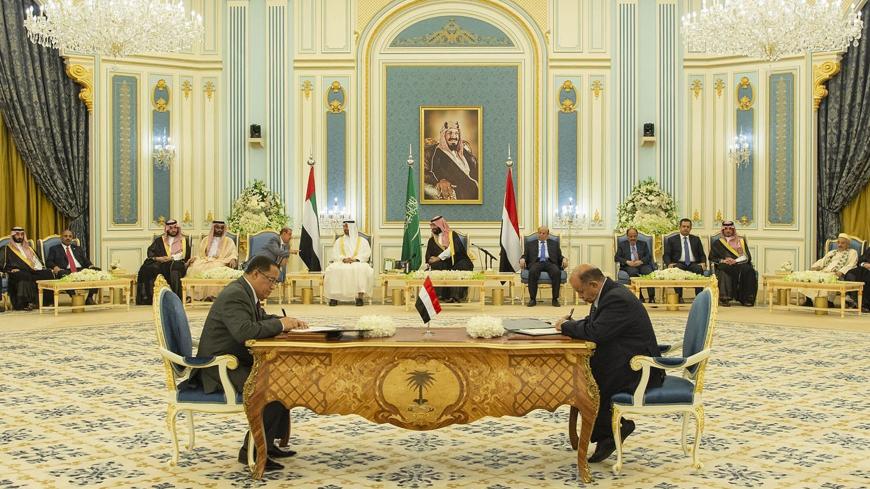 SANAA, Yemen — When Yemen's internationally recognized government and the separatist Southern Transitional Council (STC) signed a power-sharing deal — which is known as the Riyadh Agreement — on Nov. 5 to end a power struggle in the south, residents of Sanaa expressed frustration at the agreement.

“This agreement is born dead. It doesn't help us nor harm us in Sanaa,” said Naif Sakkaf, as he piled Arabic newspapers in his newsstand in Sanaa. He hopes it will not last and collapse before long.

Sakkaf, who has been working at the newsstand near Sanaa University for two years, explained his position, saying, “Saudi Arabia isn't qualified to sponsor Yemeni deals,” before he went even further to accuse the kingdom of being “Yemen’s only enemy throughout history.”

Sakkaf sees the Riyadh Agreement as serving the interests of southern separatists, which will lead to civil war in the south and prolong the conflict.

The agreement calls for the formation of a 24-minister Cabinet within 30 days after the signing. President Abed Rabo Mansour Hadi’s government and the STC will be equally represented in this government, according to the deal, which also states that the STC would be included in any political talks aimed at ending the war in Yemen, Reuters reported.

“The Riyadh Agreement is first and foremost aimed at sharing interests,” Ahmed al-Wajeeh, a political analyst based in Sanaa who preferred not to reveal where he works, told Al-Monitor. "The agreement united the STC and Hadi’s government against the Houthis.”

Several citizens reached by Al-Monitor declined to speak claiming to have not heard about the agreement, while others refused to comment for fear of retaliation. Those who were ready to talk shared the same views as the Houthis regarding the Saudi-led coalition.

However, Mohammed al-Rubaa, a comedian supporting the Islah Party, which is fighting alongside Hadi’s government, mocked the agreement, writing in a tweet Nov. 5, “Five years of war against the Houthis results in a truce deal with the STC.”

US President Donald Trump and the United Kingdom hailed the agreement. UN special envoy for Yemen Martin Griffiths said in a statement Nov. 5 that the deal was an “important step” in peace efforts.

The Riyadh Agreement is not the first of its kind that was sponsored by Saudi Arabia. The kingdom had previously sponsored the Gulf Cooperation Council (GCC) initiative signed in November 2011, which toppled late President Ali Abdullah Saleh and allowed Saudi Arabia to monitor the National Dialogue Conference (NDC).

“The Riyadh Agreement will negatively affect the Yemeni people, particularly those who have experienced the results of [previous] Saudi-sponsored talks,” citizen Nasr Jaradi told Al-Monitor. “We have seen the GCC initiative and the NDC that have had very negative implications.”

Jaradi, a student at the Faculty of Mass Communication at Sanaa University, explained that internal battles erupted in the wake of the GCC initiative, leading to the Saudi intervention in Yemen in 2015 that is still ongoing and caused the world's worst humanitarian crisis in Yemen.

The GCC initiative was signed in November 2011 between Saleh's General People's Congress party and the opposition. The initiative was supposed to end the 10-month protests led by the opposition — represented by the Islah Party — and other minor parties against Saleh, which were bringing Yemen to the brink of civil war. However, instead the initiative brought a corrupt government shared by Saleh’s men and the opposition, which allowed the Houthis to spread. In early August 2014, the Houthis took to the streets in Sanaa to protest government reforms that ended with them taking over Sanaa on Sept. 21, 2014.

Jaradi concluded, “The only benefactor of this [Riyadh] agreement is the Saudi regime.”

In an editorial article titled "Signing Over Sovereignty" and published Nov. 10, the Sanaa Center for Strategic Studies pointed out that while the two Yemeni sides are signatories to the agreement, “its clauses pave the way for both, and all other military and security forces in southern Yemen, to come under Saudi Arabia’s charge.”

It continued, “History will remember that Yemeni government and STC leaders alike smiled at the cameras and hailed the Riyadh Agreement as a triumph. These men who denounce the Houthis as Iranian proxies themselves celebrated signing over the country’s sovereignty, and their own legitimacy and authority, to a foreign power.”

“The agreement’s goal is not to unify the Yemeni stances, but to unite them in the fight against the Houthis — Saudi Arabia's opponent — to defend Saudi Arabia, not Yemen,” she noted.

Wajeeh believes the Riyadh Agreement is “fragile” and doesn't matter for citizens living in Houthi-controlled areas. “I don't think the deal will survive,” Wajeeh said. “I expect it to collapse at any moment.”

He added, "That's because those who signed it are tools in the hands of the United Arab Emirates and Saudi Arabia."

Political observers fear the Riyadh Agreement will meet the same fate as the Peace and Partnership Agreement signed between Hadi and all political factions, including the Houthis, in the wake of the rebels’ takeover of Sanaa in 2014. The agreement called on the rebels to hand over all institutions they have seized, dismantle the camps they set up in and around Sanaa and “immediately end all acts of violence.”

That agreement failed, and Hadi fled to Aden following clashes between his forces and the Houthis in Sanaa in January 2015, which ended with the Houthis seizing the presidential palace.

What is more important than signing the Riyadh Agreement is to actually implement it on the ground, otherwise it will meet the same fate as the Peace and Partnership Agreement that lasted three months only before it collapsed.