As violence spreads, Israel braces for escalation in West Bank

Ahead of the Jewish holiday period, the Israel Defense Forces are preparing for the possibility of more terror attacks originating from the West Bank. 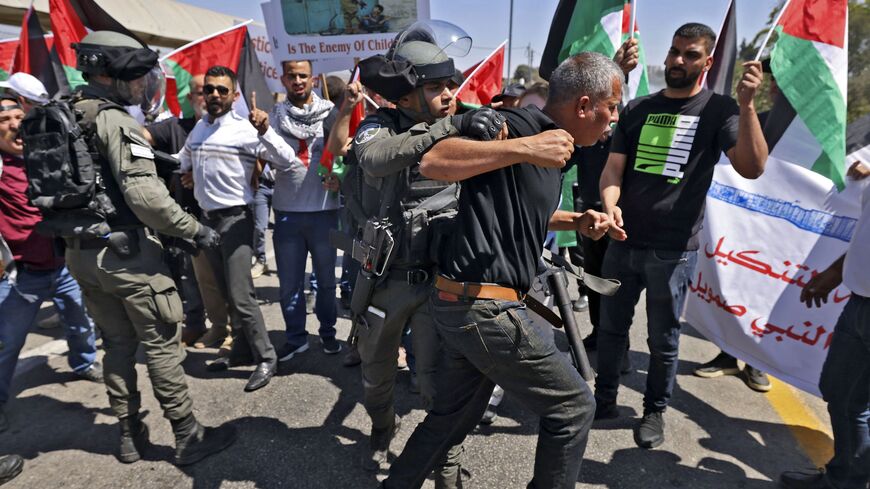 Israeli security forces arrest a protester during a demonstration by Palestinians and other activists against Jewish settlements at the military checkpoint near the occupied West Bank village of Nabi Samuel, on Sept. 9, 2022. - ABBAS MOMANI/AFP via Getty Images

In conversations with the country’s top defense officials over the last few weeks about the greatest threats to Israel’s security, the Palestinian front has constantly topped the list, with particular emphasis on the West Bank.

With the fall holiday season approaching and given the number of Palestinians killed in clashes with the Israel Defense Forces, the Israeli defense officials are bracing themselves.

The recent escalation of tensions between Israel and the Islamic Jihad movement in Gaza did not actually begin in the Strip. It erupted with the arrest of a senior Islamic Jihad member in Jenin that was immediately followed with threats of vengeance by the group’s leaders in Gaza.

Israel suffered little damage from the recent confrontation with Islamic Jihad, compared with the harm it sustained during Operation “Guardian of the Walls” a year earlier. Back then, Hamas was successful in a number of ways, from the recruitment of new members in mixed Jewish-Arab cities within the Green Line to direct clashes with Israel’s security forces.

Israel realizes that the risk of violence from Gaza is nothing compared to the risk of an eruption of violence in the West Bank. Everyone remembers the lethal attacks during the second intifada in the early 2000s and the much shorter escalations of violence over the last few years. In late 2016, the IDF contended with lone wolf attacks for about half a year, and last March and April, dozens of Israelis were killed within and beyond the Green Line.

As a result of these attacks last year, the IDF significantly increased its presence along the border between Israel and the West Bank in order to prevent potential terrorists from crossing into the center of Israel. Israel also stepped up arrests in the Palestinian territories to stop potential attacks and confiscate illegal weapons. Much of Israel’s security operations centered around the Jenin region, where many of the most recent attacks' perpetrators originated.

Nevertheless, despite the expansion of Israeli operations in the region, a Palestinian armed with a rifle and explosives was caught inside Israel Sept. 8 on his way to launch an attack in Jaffa.

One of the direct results of Israel’s intensified activities in the West Bank is a noticeable increase in the number of clashes with Palestinian activists. As a result, there has also been an increase in the number of Palestinian casualties. More than 80 Palestinians have been shot dead by Israeli troops in the West Bank since the start of the year, a significant increase compared to the same period last year. Since the start of September alone, six Palestinians have been killed there by Israel’s security forces.

Similarly, the number of Israeli casualties has also risen. Just this week, there was a disturbing attack in the Jordan Valley: Three members of the same family fired at a bus carrying soldiers in broad daylight and tried to set the bus on fire by dousing it with a flammable liquid and tossing Molotov cocktails at it. The driver of the bus and six soldiers were injured.

While the chief of staff’s remarks were exceptional because he made them directly and in public, senior military officials have long been saying that the Palestinian security forces' grip in the territory is weakening.

Perhaps partly because of the political weakness of the Palestinian Authority, the Palestinian security forces have become less active. The vacuum is being filled by terrorist groups as well as armed young people who do not identify with any particular group and are influenced by incendiary content on social media.

Israel is well aware that the growing number of Palestinian casualties fans the flames in the West Bank and leads to attempts at vengeance. Israel’s security forces are working to limit the ensuing friction to clashes with Israeli troops in Palestinian cities rather than attacks in Israeli cities. The Palestinian public has not joined this swell of violence en masse and that there are no frequent mass disturbances in the West Bank.

In recent Israeli security assessments, four main approaches have emerged to contend with the situation and reduce friction with the Palestinians.

The second approach is to employ international pressure on the Palestinian authorities to take control of the territories. Israel has approached the United States and other countries for assistance to this end.

The third approach is to continue Israeli operations in Palestinian territories to prevent attacks on the Israeli home front.

Finally, the fourth remains Israel’s policy of granting economic benefits to the Palestinian population in the West Bank in the belief that a better economic situation there will help to rein in terrorism. A report last week said Prime Minister Yair Lapid was planning to convene his cabinet to discuss more such measures.